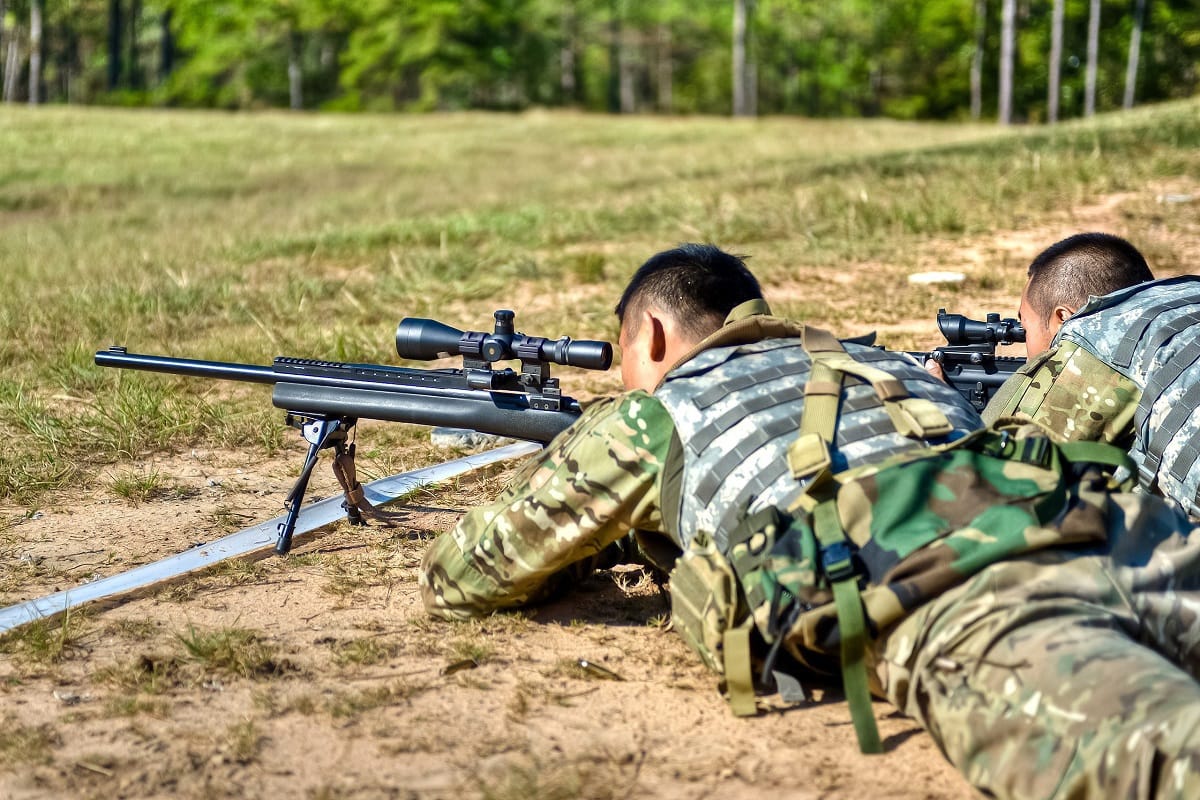 T-93 sniper rifle with the Taiwanese team competing in the International Sniper Competition at Fort Benning, Georgia in 2010

The story of David and Goliath is a motif of asymmetric warfare. A smaller, seemingly weaker opponent utilizes an unconventional or asymmetric approach to defeat or repel a larger, seemingly stronger opponent.

In the present day, the world cannot help but notice a rising Goliath in our midst, China.

China is rising and looks to take its place on the world stage with sights set initially on the Indo-Pacific region. While world powers adjust to a globally expanding China, no one feels more like David than the tiny island of Taiwan.

As China continues to grow in strength and influence, Taiwan must look to invest in asymmetric advantages to avoid overmatch. Reorganizing Taiwan Special Operations Forces (SOF) under a unified Joint Special Operations Command and inclusion of Irregular Warfare (IW) into the new Taiwan military strategy could enhance, complement, and nest within Taiwan’s Overall Defense Concept.

The 2017 U.S. National Security Strategy and the 2018 National Defense Strategy clearly designate China as a great power competitor with revisionist ambitions. Concurrently, China acknowledges its rising ambitions in its 2018 National Strategy, which seeks to achieve “the great rejuvenation of the Chinese nation” by 2049. The executor of this strategy, the Chinese Communist Party (CCP), frames this strategy as an effort to realize long-held nationalist aspirations to return China to a position of strength, prosperity, and leadership.

China’s great rejuvenation strategy includes seizing and controlling Taiwan by any means necessary, a fact that has been the reality for the government and military on Taiwan since the Republic of China (ROC) relocated from mainland China in 1949.  At present, Taiwan with its own democratically elected government is home to over twenty-three million.  The island nation is a critical point in the first island chain and a stepping point for China’s expansion strategy in the Indo-Pacific region. Taiwan’s main island, roughly the size of New Jersey, lies approximately 200KM off the southern coast of China across the Taiwan Strait.

ROC Armed Forces: Up To the Challenge?

Taiwan’s military is charged with defending its territories and safeguarding Taiwan’s sovereignty. While the U.S. officially shifted recognition from the ROC to the People’s Republic of China (PRC) in 1979, the U.S. maintains unofficial ties with the island under the 1979 Taiwan Relations Act (TRA).  The TRA allows for U.S. arms sales to Taiwan for self-defense, maintains the capacity of the U.S. to defend Taiwan but does not commit to the defense of Taiwan— a policy known as strategic ambiguity. The threat of American military intervention in the event of an attack from either the PRC or Taiwan has kept a semblance of stability in the region. However, the rise of China, both militarily and economically, has begun to tip the scales in Beijing’s favor.

In spite of more than four decades of support from U.S. arms sales, China’s growing military capabilities have diminished Taiwan’s defensive capabilities. Taiwan, now in the shadow of a looming giant, seeks to offset China’s military advantages.  In 2019, Taiwan’s defense budget was roughly $10.9 billion; China’s was nearly 15 times that amount at $174 billion.  According to the Pentagon’s 2020 Annual Defense report on the PRC’s military capabilities, “China’s multi-decade military modernization effort has eroded or negated many of the military advantages that Taiwan has historically enjoyed in the context of a cross-Strait conflict.” Still, Taiwan is not sitting idly by while China grows its military might. Taiwan’s senior military leaders have recognized the threat and developed a new overall defense strategy.

Taipei is developing new concepts and capabilities for asymmetric warfare under its new defense strategy, the Overall Defense Concept (ODC), to counter the growing military threat. According to the ROC’s 2019 National Defense Report, defense officials acknowledge the military disparity between the People’s Liberation Army (PLA) and ROC Armed Forces. The report highlights “offensive and defensive information and EW [electronic warfare], high-speed stealth vessels, shore-based mobile missiles, rapid mining and minesweeping, unmanned aerial systems, and critical infrastructure protection,” as areas of improvement and development. The ODC calculates resource constraints and seeks to maximize and integrate capabilities across domains to achieve force overmatch at critical times. The ODC calls for organizational reform, re-focus, and growing new offset capabilities. While this concept fully embraces asymmetric capabilities, they are firmly placed with conventional forces and do not integrate the concept of Irregular Warfare.

The ODC provides an excellent opportunity to re-azimuth Taiwan’s special operations forces (SOF) and build a distinct IW capability to support the defense strategy. Irregular warfare is defined as “the struggle among state and non-state actors to influence populations and affect legitimacy” which “favors indirect and asymmetric approaches, though it may employ the full range of military and other capabilities, in order to erode an adversary’s power, influence, and will.” IW seeks to impose high costs and create dilemmas for the adversary.  Currently, Taiwan does not have a branch of the military focused on conducting IW. Furthermore, Taiwan’s SOF are loosely organized under service branches with no unified command. The majority of Special Operations Forces are under the command of the Army Aviation.  SOF under the aviation command is most likely a historic effect. Taiwan SOF initially trained in the 1960s as quick reactionary forces to respond to and conduct aviation-supported raids or strikes. As a result of this historical role, SOF are often employed tactically to support conventional forces. In this David and Goliath match-up, SOF are ideal for developing dynamic and flexible non-standard options against a larger force.

To enable the IW competency special operations to require changes to its’ organizational, training and doctrine. Taiwan’s SOF are uniquely capable of taking on an IW competency in the military. These forces would provide the capability to disrupt, degrade, counter, and preempt coercion and subversion of an adversary through unconventional methods that would be difficult to counter and target. Additionally, consolidating SOF under a joint command with a charter to conduct IW could increase unity of command, strengthen efficacy and support conventional commands. IW capability under a Joint SOF Command provides Taiwan’s Ministry of National Defense (MND) with both a direct (conventional) and indirect approach (special operations) for the employment of asymmetric capabilities. In fact, Taiwan enjoys a legacy of such IW concepts, force structure and capabilities (e.g. the ‘political warfare task force’ [政戰特遣隊]) dating back to when the Kuomintang (KMT) regime’s strategic objective was focused on reclaiming the Mainland. Thus, the concept would not be unfamiliar to the Taiwan military.

Restructuring and reforming Taiwan SOF requires minimal investment from the MND as the special operations units already exist; they are just not centralized and tasked. Creating a dedicated Joint Special Operations command with a core competency of IW will provide a low-cost, high-yield advantage to the MND. The shift to focus on IW does not mean that Taiwan SOF abandons its core capabilities. Instead, the transition provides opportunities to prepare, adapt, and face the challenges of the force. Developing the IW mission role, capabilities and expertise could also help counter PLA special operations and fifth-column (associated) activities against Taiwan.

A Joint SOF Command capable of IW employment in conjunction with conventional operations complements the ODC and provides significant advantages at key intersects.  The ODC separates into three phases: force protection, the decisive battle in the littoral zone, and destruction of the enemy at the landing beach. During the force protection phase, the military seeks to enhance the survivability of Taiwan forces to sustain the PLA’s initial attack and prepare for a counterattack. The decisive battle in the littoral zone is the phase in which occurs most force-on-force activity, repelling and degrading the enemy before landing. The final phase, destruction of the enemy at the beach, is when the degraded enemy approaches and begins landing operations. A Joint SOF Command employing IW can integrate with conventional forces during all phases of the ODC.

During the decisive battle in the littoral zone phase, it can be assumed that the adversary will target conventional command and communications nodes, frustrating targeting and creating chaos on the battlefield.  SOF can create redundancy in kill chains, targeting, and communications structures. Joint SOF command provides the capability to employ non-standard flexible units that can operate independently in a degraded communications environment capable of targeting land, sea, and air high payoff targets. SOF can support the conventional force fight in creating multiple dilemmas for the adversary on non-contiguous fronts incorporating means that could severely degrade and confound adversary systems and nodes.

The destruction of enemy at the landing beach is the final phase. Taiwan maintains the defensive advantage during this stage because its shores naturally offer limited areas for landing crafts and spearheads. However, critical weapons systems and command and control (C2) nodes will most likely be degraded or disrupted.  Independent SOF units, functioning with limited communications systems and mobile surface to air/land/sea weapons, can degrade an invasion force and provide time for conventional forces to reorganize and regroup. Small, flexible units operating in a degraded communication environment, behind and ahead of the forward line of troops, will pose a significant risk to an attacker and confound adversary targeting capabilities. The Joint SOF Command can provide C2 by integrating with both conventional and reserve forces to force-multiply and utilize natural and non-military resources to support the beachheads’ defense.

Throughout all the phases of the ODC, a Joint SOF Command employing IW provides a significant advantage against a superior attacking force. SOF advantages include: an independent redundant communications network; employment of non-standard methods of movement and maneuver on the battlefield; identification, exploitation, and targeting of critical vulnerabilities; and C2 integration between conventional and reserve forces. Future IW tactics can be developed to provide military structure and direction to the Taiwanese people during an invasion. In that particular scenario, Taiwan SOF can provide specialized skills in force-multiplying and working with the local population to target and repel the enemy to defend the homeland.

David vs. Goliath in 2020 in the Taiwan Strait

David did not have time to increase his strength when he fought Goliath however, he was able to defeat Goliath utilizing asymmetric means to offset his strength. IW is a capability that, when wielded correctly, can achieve, support, and complement the overall defensive effort. While the ODC strategy expertly crafts a remarkable way forward for Taiwan’s defense, IW is also undoubtedly a crucial capability that should be incorporated to support the ODC. Irregular warfare operations are not appropriate tasks for conventional force units because IW requires an investment of specialized training, organization, leadership, and materials to build this capability.

Special Operations Forces are uniquely postured and suited to conduct IW in a way which complements conventional forces and operations. With minimum investment and organizational reform Taiwan can establish a joint SOF command capable of accessing and employing IW across domains. These capabilities are an effective and efficient method to blunt PLA force projection and create an advantage against a superior force. The threat of invasion from China remains a persistent menace for Taiwan. Seeking offset and asymmetric approaches such as IW, would provide Taiwan options and strategies to continue to defend their homeland.

Major Justin Woodward is a Special Forces officer, a veteran of small wars, and a student of Unconventional Warfare. He has served in the Army in various roles for 13 years.

Eric Lee (Research Associate, Project 2049 Institute) contributed to this article based on his research and work on Taiwan’s Overall Defense Concept (ODC). For more on the ODC, see this.

Disclaimer: The above work reflects the authors’ interpretation of the Taiwan defense strategy and none of the information presented above necessarily represents the official policy or position of the Special Forces Regiment, the Department of Defense, or the United States Army.

Major Justin Woodward is a Special Forces officer, a veteran of small wars, and a student of Unconventional Warfare. He has served in the Army in various roles for 13 years.