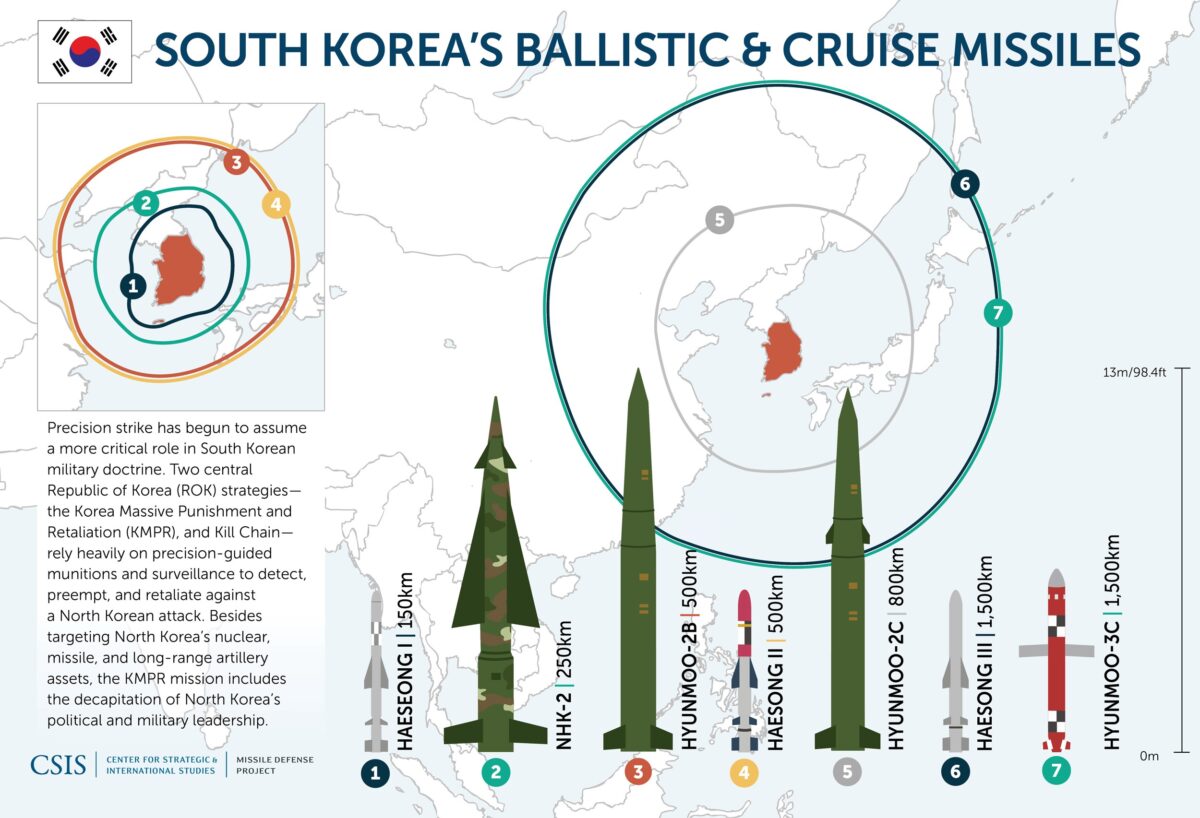 President Joe Biden recently met with South Korean President Moon Jae-in in May, only the second in-person summit for the new U.S. president. The meeting focused on dealing with North Korea, denuclearization, cooperation on semiconductors, and climate change. But a change that was little noticed by the press could have big consequences. After the meeting, South Korea issued a joint statement on what it calls “missile sovereignty.”

“Following consultations with the United States, the ROK [Republic of Korea] announces the termination of its Revised Missile Guidelines, and the Presidents acknowledged the decision,” read South Korea’s statement.

South Korea can now make missiles, of any size, to reach anywhere it wants. This entails not just North Korea, but the North’s traditional backers—China and Russia. The decision opens the door for a potential arms race on the Korean Peninsula, but it also correctly enables South Korea to fully defend itself. That gives further reason for America to stop subsidizing wealthy South Korea’s defense.

The backstory is that the missile restrictions were imposed in 1979, in hopes they would forestall an arms race. In return, the U.S. granted or affirmed its commitment to South Korean security and agreed to share technology. Of course, the North never stopped developing missiles and even nuclear weapons. To reflect this, the missile restrictions have already been softened. In 2001, the allowed distance of South Korea’s Hyunmoo missiles was extended. In 2017, restraints on the missile’s payload size were removed.

The Biden administration’s move is likely to spark ramifications beyond the Korean Peninsula. “The termination of the missile guidelines is a big deal,” retired diplomat with extensive Korea experience David Straub told Foreign Policy’s Donald Kirk. “I would be very surprised if [South Korea’s] ambitions now are not expressed in much longer-range and much more capable missiles,” said Straub. A North Korea analyst in Seoul, South Korea, Choi Jin-wook, believes the primary target is China. That’s because South Korea’s missiles can already hit North Korea and extending the range and payload ability places China in the crosshairs.

The fringe concern is that South Korea won’t stop at bigger missiles. Now that North Korea could potentially hit the Western United States, some in South Korea’s defense establishment doubt America would respond to a nuclear attack by the North against the South for fear of losing American cities. “Some South Koreans worry, for example, that the United States would not trade San Francisco to protect Seoul,” says The Rand Corp’s Bruce Bennett.

Time to Reduce our Footprint

Yet pundits, worrying about more arms on the Korean Peninsula, which is already heavily militarized, are missing the forest for the trees. The foreign policy establishment widely hailed Biden’s meeting as ‘restoring’ America’s relationship with South Korea. By this the establishment means that the U.S. under the Trump administration was asking for $5 billion per year to keep 28,500 troops there, but now the Biden administration has agreed for South Korea to pay only $1 billion per year.

That’s a slight increase on what South Korea was paying before, but it’s still a bad deal for the United States. $1 billion merely offsets “some deployment costs,” and “does not address the much larger expense for Americans of adding force structure to protect the South.” In other words, America is still heavily subsidizing South Korea’s defense, even though South Korea has a sizable and well-equipped military force of its own and a large economy. To wit, South Korea has the world’s 10th largest GDP, the 10th largest military budget, and the ROK Armed Forces are ranked as the 6th most powerful fighting force.

South Korea can defend itself. South Korean missile sovereignty is welcome because the nation should be more responsible for its own defense. In other words, ending missile restrictions by the Biden administration is welcome, but only if we use greater South Korea autonomy to reduce the U.S. footprint on the peninsula.

Washington can start with baby steps. Requiring the South to pay only $1 billion for U.S. troops defending the country is a mistake. Going forward, the U.S. should look for ways to reduce its troop presence there. Ensuring nuclear protection of the South does not require nearly 30,000 troops in South Korea. Our troop presence also bothers China, which opens the door for a potential compromise: trade troop drawdowns in South Korea for China placing more economic pressure on the North to denuclearize, or scale back its weapons programs. Either way, U.S. troops remaining indefinitely is not good policy, nor is it good for long-term Korean peace.

Willis L Krumholz is a fellow at Defense Priorities. He holds a JD and MBA degree from the University of St. Thomas, and works in the financial services industry.

Willis L Krumholz is a fellow at Defense Priorities. He holds a JD and MBA degree from the University of St. Thomas, and works in the financial services industry.