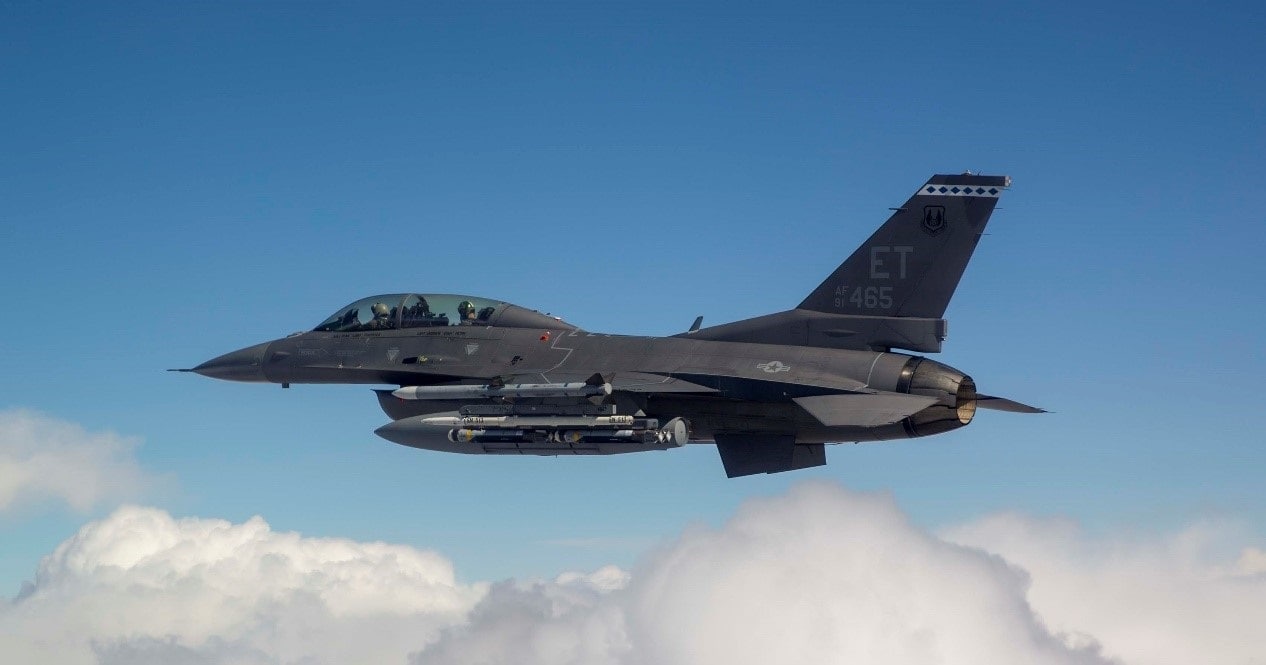 Collaborative Small Diameter Bombs (CSDBs) are carried on the wing of an F-16 fighter from the Air Force Test Center’s 96th Test Wing at Eglin AFB Feb. 19, 2021 during the second flight test of collaborative weapon technologies. Six of the bombs were dropped from two 96TW aircraft during the third and final flight demonstration of the Air Force Golden Horde Vanguard May 25. (Courtesy photo)

Last month, the Department of the Air Force Golden Horde Vanguard program successfully completed the three objectives of the final flight test of its modified Boeing Collaborative Small Diameter Bomb I (CSDB) at White Sands Missile Range, N.M. The CSDBs were modified with Networked Collaborative Autonomy (NCA) payloads, which provided the weapons with the ability to rapidly respond to changes in their battlespace without real-time human intervention.

That could enable them to effectively modify their actions to optimize mission success.

The Golden Horde program is an initiation focused on advancing NCA weapon capabilities through live and virtual testing. It is one of the Air Force Research Laboratory’s four major Vanguard efforts, which could drive transformational technologies by utilizing prototyping and experimentation.

The U.S. Air Force has already defined the Golden Horde as a class of weapons that are networked, allowing them to gather and share data with each other in order to better accomplish mission objectives.

During the May 25, 2021 flight test at White Sands, a pair of F-16s from the 96th Test Wing Eglin Air Force Base (AFB) simultaneously released their weapons – four released from one aircraft while two additional weapons were released from the other. As in previous training missions, the weapons established communications with each other.

“This successful demonstration completes the CSDB effort, and is a great testament to the hard work of the team,” said Steven Stockbridge, the Golden Horde principal investigator. “Knowledge gained during the past two years of the Golden Horde Vanguard will be transitioned to the next phase of the program.”

The first objective of May’s tests expanded the radio network from the previous two and four weapons in flight to six weapons in flight, as well as a ground station. The Air Force said that this demonstrates the ability of the L3Harris Banshee 2 radio network to scale up the number of nodes required to accomplish the mission.

A second objective of last month’s tests was to send an In-Flight Target Update from a ground station to the flight weapons to engage a new high priority target. In the tests, an IFTU message was sent from outside the weapon swarm, and it directed the CSDBs to act on it accordingly. That successfully demonstrated the ability of Golden Horde weapons to interface with the larger Joint All-Domain Command and Control network.

“The JADC2 linkage is a key capability for future NCA weapons, and one the team was particularly focused on implementing,” said Norma Taylor, the CSDB Program Manager.

A final new objective of the recent test was to have two weapons perform a synchronized time on target (STOT) attack on a single target location. A STOT algorithm, which was developed at Georgia Tech Research Institute was able to flexibly support the new the new target requirements without any software changes, and during the drills, two other weapons were synchronized on two targets.

“The Golden Horde team is blazing an exciting new path for air-delivered weapons,” said Maj. Gen. Heather Pringle, AFRL commander. “These technologies are completely changing the way we think about weapon capabilities, much like the laser-guided bomb did several decades ago. Golden Horde and technologies like this will enable the Department of the Air Force to overcome many of its current and future challenges, and we’re just beginning to unfold all the possibilities.”