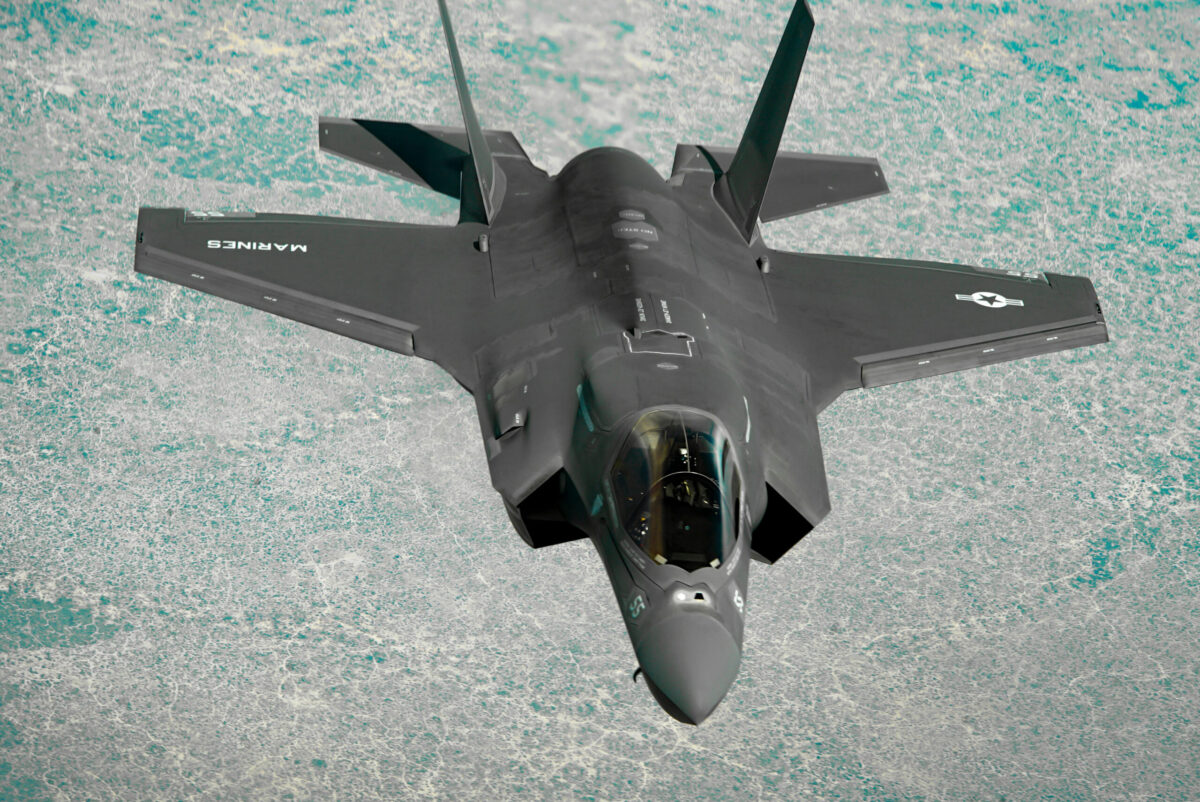 Editor’s Note: The following is an interview with David Berke, a retired Marine Corps officer, and combat veteran to get his views on the F-35.

As a F/A-18 pilot, he deployed twice from the USS John C Stennis in support of combat operations in Iraq and Afghanistan. He spent three years as an Instructor Pilot at TOPGUN where he was dual qualified in the F-16 Fighting Falcon and served as the Training Officer, the senior staff pilot responsible for the conduct of the TOPGUN course. He then served as an ANGLICO Forward Air Controller supporting the Army’s 1st Armored Division during extensive urban combat operations in Ramadi, Iraq in 2006. He was the only Marine selected to fly the F-22 Raptor having served as an exchange officer at the Air Force’s 422nd Test and Evaluation Squadron as the Division Commander. He became the first operational pilot ever to fly and be qualified in the F-35B, serving as the Commanding Officer of the Marine Corps’ first F-35 squadron from 2012-2014.

Berke earned his master’s degree in International Public Policy from the Johns Hopkins School of Advanced International Studies with a concentration in Strategic Studies and is a Non-Resident Senior Fellow at the Center for Strategic and Budgetary Assessments.

Kazianis: There is a lot of talk about the F-35 in the sense that it can act not only as a potent weapon of war but also as a sensor out in the battlespace acting as an aerial quarterback.

Can you explain to us a little on how that works? What advantage does that bring to the U.S. military?

Berke: You know the question about the F35 being unique is a good question. It’s the representative 5th generation fighter. It’s going to be the most prolific 5th generation aircraft, not only that we have, but throughout the world. And yes, there’s a lot of discussion about China and Russia and other nations which are clearly actively developing the same technology and the same designs.

What’s unique about the F-35 isn’t just one thing, especially when you compare it to like an F-15 or older generation aircraft like the Phantom. A lot of people initially point to stealth, which of course is a unique characteristic, but stealth by itself isn’t really what separates the F35. It’s one of several things, and to be honest with you, probably the most noteworthy component, the most noteworthy piece of an F35 making it unique is actually the information capacity, and there are two different things to discuss there. First is the breadth of information that’s out there. It does really well in a broad range of RF spectrum information, Electro-optical, infrared, laser.

So by itself it already operates sort of more broadly and widely than most other aircraft, but even those that have, you know, external sensors and pods that give them those type of strict spectrum capabilities– what separates the F35 and what makes it truly unique is the ability to fuse and share that information.

So what that really means is we’ve got all this amazing sensor information capability in one F-35. It’s linked to numerous other F-35s in the network, and it doesn’t just pass information back and forth. It actually combines that information to enhance and increase the fidelity of that information, and then shares that other aircraft in the link, offboard sensors that are airborne, offboard sensors that are on the ground, users in a whole bunch of different ways, and we could really spend a lot of time talking about the information capacity of the 35, but that’s truly the component of the several different components that make it such a unique aircraft.

The question about how the F-35 isn’t just individually a really capable weapon, but a sensor that operates out in the battlespace that acts not just as an information gatherer, but a quarterback of other systems that are out there and how it initiates not just the communication, but also the decision-making process, both airborne and on the ground is such a unique advantage that the F35 brings that no other aircraft can bring.

So first of all, what’s great about the F-35 partially because of its self capability, is it can operate in really difficult environments. You’ve heard the term anti-access aerial denial- basically what that means is places where the enemy or multiple enemies don’t want us to operate. We now have a platform that can dictate to the threat where we operate rather than the other way around.

What it also does, as it’s operating in those highly contested pieces of the battlespace, it can share information and help other platforms both in the air and on the ground make decisions using the information from the F35 that they might not normally get ’cause they can’t operate in those same places, so it’s a massive advantage that doesn’t just benefit other platforms and other F-35s, it benefits all decision-makers connected to the network because of that sensor suite and the information it brings and how well it can share and disseminate that information outside of those areas that normally we simply can’t operate in.

So it truly does bring a capability as an airborne platform that affects all the other warfighting capability that we would bring to the table.

Kazianis: Of course, no weapon as advanced as the F-35 and its stealth package can be created on a shoe-string budget, nor built quickly. Over the years, there has been quite a bit of attention on the total cost of the F-35 to develop, manufacture as well as maintain. There has been, however, very little coverage in the media about how costs have dropped considerably as more and more F-35s are built.

Berke: The question about the F-35 in a comparison between the capability and cost is a question we’ve been grappling with for a long time. I was fortunate enough to be one of the very first, actually, the first F-35B and one of the first operational F-35 pilots in the world, and I got to see first-hand the unique capability of the F-35 and the 5th generation fleet bring.

I was also very lucky because I was the only Marine to ever fly the F-22 Raptor and after having flown the Raptor, the first 5th generation fighter we had built, I went directly to the F-35. So for almost seven or eight years, I had this really neat exposure to the fifth generation world…and what I was able to do is bring context to the operational capability that came with obviously a very high cost.

This is not a cheap program. Now it doesn’t surprise me in the least bit that we’ve seen in recent years, as the program has really gained a lot of steam, that capability has grown dramatically, and the production side has improved and it got more efficient, that costs are plummeting. Which is what we always expected to happen, but just as important as how low costs have gotten, how much more affordable this plane is now compared to what people thought it was going to be.

The real question is what does the cost comparison to the capability and that’s where the cost advantage really comes from, not just the price has come down so dramatically that it’s competitive with any other platform out there, but the amount of capability it brings, the amount of opportunity it brings is significantly higher than any other platform, any fortune fighter being developed right now.

So as we look and we wrestle with these questions of these significant costs, and yes, these are expensive platforms to build, it’s not just cost in and of itself, it’s that cost comparison to the capability. When you look at that, it makes it beyond affordable because the capability of the platform so vastly exceeds what any other platform could possibly bring. So when you put those two together, it really makes for an affordable, capable platform.

Harry J. Kazianis is a Senior Director at the Center for the National Interest. This a lightly edited transcript of a previous interview the author conducted.