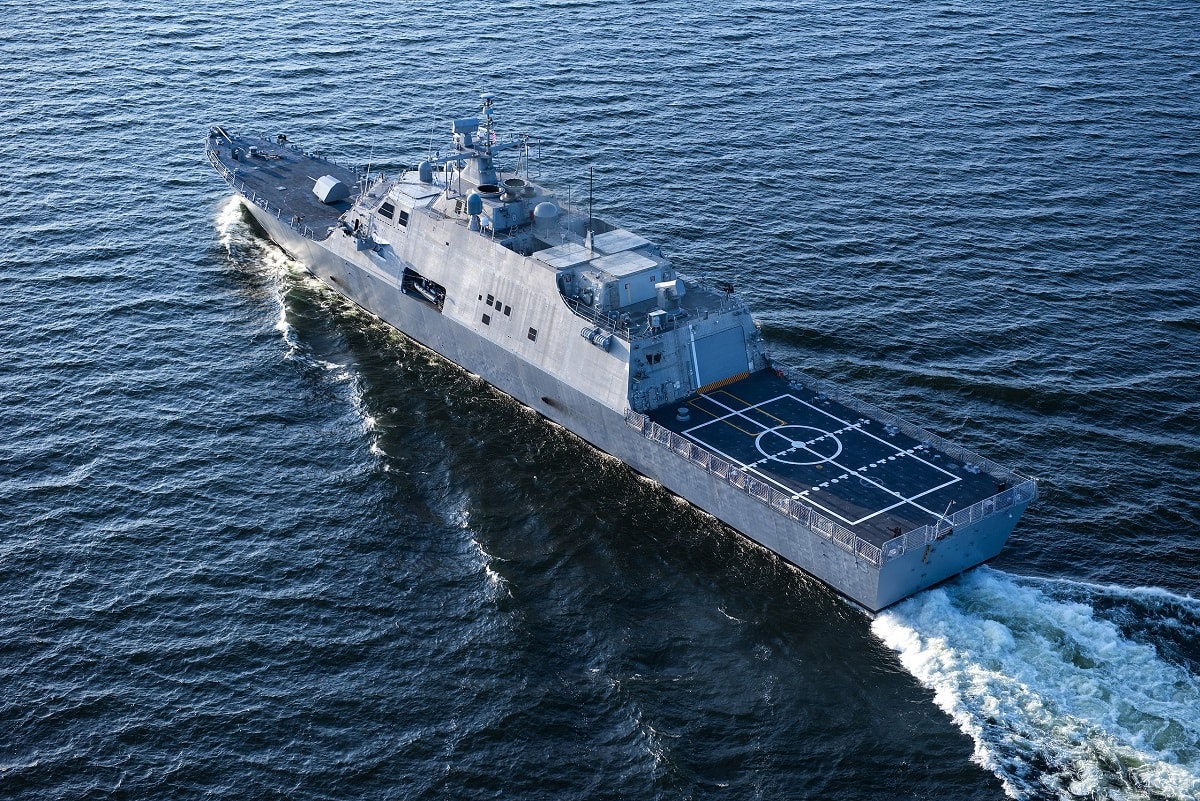 180711-N-N0101-368.LAKE MICHIGAN (July 11, 2018) The future littoral combat ship USS Wichita (LCS 13) conducts acceptance trials, which are the last significant milestone before a ship is delivered to the Navy. LCS-13 is a fast, agile, focused-mission platform designed for operation in near-shore environments as well as the open-ocean. It is designed to defeat asymmetric threats such as mines, quiet diesel submarines and fast surface craft. (U.S. Navy photo courtesy of Lockheed Martin/Released)

This week the littoral combat ship (LCS) USS Savannah was officially delivered to the United States Navy according to builder Austal USA. The vessel, which was previously known simply as LCS 28, is an Independence-class variant. With the arrival of this warship, it makes the LCS program the Navy’s second-largest and only behind the Arleigh Burke-class destroyers.

In 2019, three of the warships, which are designed for operations in coastal or littoral waters, were delivered to the Navy; followed by an additional four last year. A total of six are scheduled for delivery by the end of 2021, and that will include two additional Independence-class variants and two more Freedom-class variants, a record for the program.

As USNI News reported, the deployment of the new warships comes as the service has begun to better understand how to best utilize the two LCS variants. Efforts have been made to improve the reliability of the platforms.

The LCS program has not been without controversy – in part because the ships have been prone to breakdowns and defects. The LCS concept was meant to emphasize speed, flexible mission modules and even to operate in waters where larger warships couldn’t.

However, some have argued that the small and fast ships aren’t really up to the task in the changing geopolitical situation. It has been suggested that a new class of frigates, as well as unmanned ships and aircraft, could do the jobs the Navy envisioned for the LCS and do it more cost-effectively. Issues with the ships have even earned the vessels the unflattering nickname “Little Crappy Ships” by some who have served on them.

Yet, the warships still have proven to be able to do jobs that larger warships would be unable to accomplish, and that included a deployment of seven LCSs to the U.S. Fourth Fleet as part of a counter-narcotics force expansion, while the Independence-class ships USS Montgomery (LCS-8) and USS Gabrielle Giffords (LCS-10) were able to operate in places where other larger ships couldn’t.

“Gabby Giffords and Montgomery did stops, pre-COVID, in ports that we hadn’t been in a number of years. Puerto Princesa in the Philippines was one of them,” Capt. Tom Ogden, commander of the Singapore-based Destroyer Squadron 7, told reporters earlier this month. “The ability for the ship, with the steerable water jets that they have, even with less powerful tugs, you can do a lot of things on your own. Getting a DDG in and out of an austere port requires a little bit more support.”

Out With the Old, In With the New

The addition of six new LCS vessels may not significantly increase the size of the fleet, however. As previously reported, the Navy had proposed retiring the first four LCSs early in its Fiscal Year 2021 (FY21) budget submission. Chief of Naval Operations Adm. Mike Gilday justified the plans by saying it would cost about $2.5 billion to update those warships to the configurations of ships in the class that have been since built, and that the funding could be best spent elsewhere.

It has been noted too that the first four LCSs were “test ships,” and are configured differently from the new vessels of their classes. However, Congress has nixed plans to decommission the third and fourth vessels – respectively the USS Fort Worth (LCS-3) and USS Coronado (LCS-4).