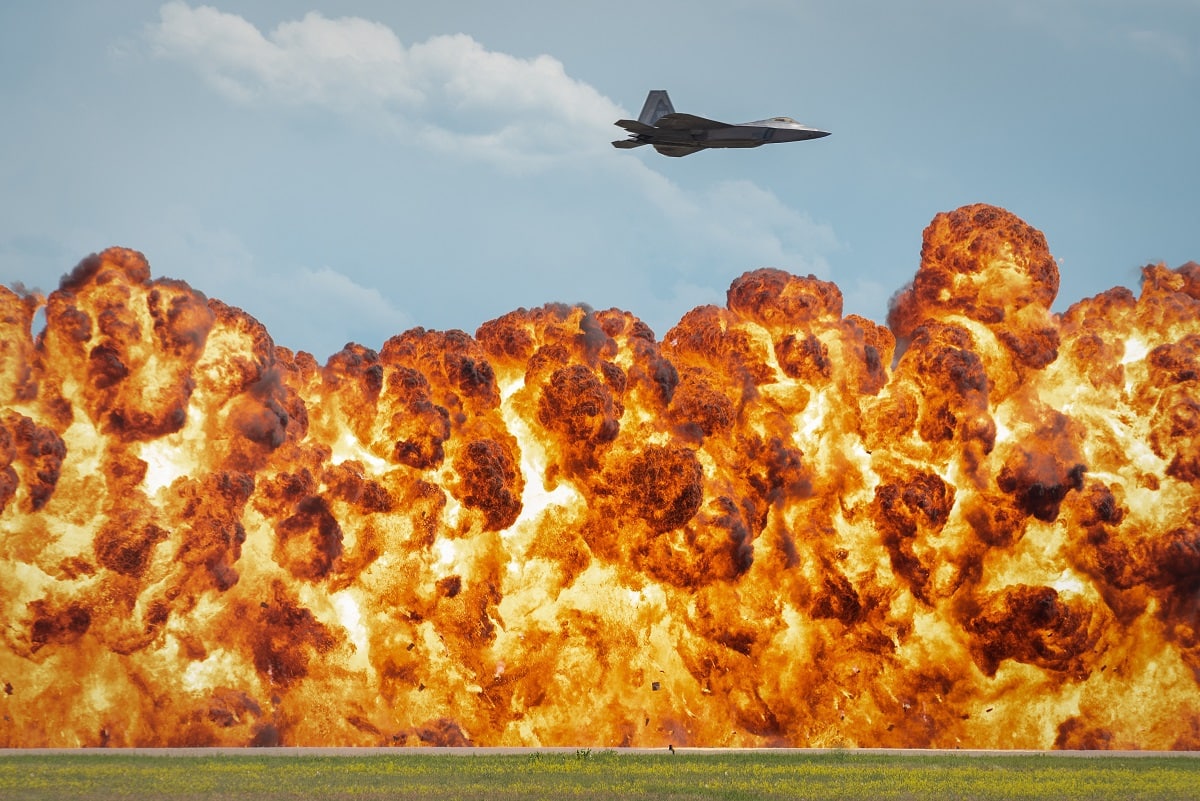 A 1,000-foot wall of fire explodes below the F-22 Raptor during a high-speed pass maneuver at the “Mission Over Malmstrom” open house event in Great Falls, Mont., July 14, 2019. The pyrotechnics are used to simulate live ordnance and the air-to-ground capabilities of the Raptor. The two-day event featured performances by aerial demonstration teams, flyovers and static displays. (U.S. Air Force photo by 2nd Lt. Samuel Eckholm)

Parts of the launch are censored, indicating the Ministry of Defense wishes to conceal some characteristics of the weapon, but most experts believe the test was of a new 77N6-N or 77N6-N1 hit-to-kill missile designed to smash into ballistic missiles arching outside the atmosphere at speeds of up to Mach 20 (4.3 miles per second) and swat down Low-Earth Orbit satellites. Indeed, the blast of the first missile’s rocket booster igniting after being ejected out of the launch tube appears to have been so powerful that it blew away the open ‘cap’ off one of the tubes.

Then on Thursday, Russia’s TASS news agency, citing an anonymous defense industry source, reported that the Ministry of Defense had signed a contract with manufacturer Almaz-Antey for the first ten S-500 ‘systems’, with deliveries beginning in the first half of 2022, after testing wraps up later in 2021. Almaz-Antey declined to confirm the report, however.

As hinted by the name, Prometey (“Prometheus”) has a maximum potential range of 373 miles away and interception altitude exceeding 650,000 feet (though some sources cite lower figures), though it can also engage lower-flying aircraft and cruise missiles.

A U.S. Defense Department fact sheet estimates the S-500 will have “good capability against Medium-Range Ballistic Missiles” when it first enters service, and “built-in potential for future upgrades to intercept longer-range systems”, like the U.S. Minuteman III and Trident D5 inter-continental range missile with speeds of Mach 23-24. Currently, the S-500 is capable of mid-course intercepts of Mid-Range Ballistic Missiles (MRBMs) but has a more limited firing window in which it can attempt to counter Intercontinental Ballistic Missiles (ICBMs) in the terminal or late-midcourse phase.

That makes the missiles roughly comparable to the SM-3 missile deployed on U.S. warships, though the 77N6 may rely on space-based sensors for terminal guidance rather than a built-in radar seeker.

The  S-500 will first deploy to defend the Moscow region, occupying a middle layer between the preceding S-400 units and Moscow’s unique silo-based A135 missile defense system, which itself will be replaced by a new A235 system. The S-500 retains the advantage of being mobile, thus more capable of evading enemy strikes. Besides the 77N6 weapons, S-500 launchers can use the 40N6 and 48N6 anti-aircraft missile used by the S-400 system, and its command post can coordinate the use of older types of air defense systems.

Five years ago, I wrote in a profile that the S-500 was unlikely to enter service until 2020 at the earliest, contrary to optimistic claims it would begin delivery 2016-2017. Time will tell if the order reported on July 29 will be different. Rostec CEO Sergey Chemezov indeed claimed last year that the first deliveries of the system would occur in 2021, but the following March Deputy Defense Minister Alexei Krivoruchko said it would not enter service until 2025.

Despite slow progress, the S-500 has reportedly undergone significant testing both in Russia and even in Syria, where its “most important elements” were reportedly tested in 2018—perhaps meaning its sensors and command post were integrated with the S-300V4 and S-400 systems already present in the country.

According to Izvestia “certain problems in the operation of the equipment were identified, but they were quickly eliminated,” which included improvements to crew ergonomics. The high density of military aircraft operating over Syria and the challenges posed by heat and dust were seen as making it an ideal testing ground, as it has been for many other Russian weapons.

In May the same year, U.S. intelligence sources told CNBC a missile fired by an S-500 reportedly intercepted a practice target nearly 300 miles away, setting a new range record.

Currently, the Russian military is reportedly debating whether S-500 batteries should replace or supplement older systems in existing air defense units, or be formed into brand new regiments and brigades.

An S-500 unit consists of up to twelve two-shot TEL-based launchers, trans-loaders vehicles, a command post, and a slew of radars—all self-propelled on BAZ-6909 type trucks with 6, 8 or 10 wheels. The 91N6A(M) Big Bird S-Band radar provides long-range search capability, while the 96L6-TsP ‘Cheeseboard’ system is focused on higher-altitude missile detection. For fire control guidance, there’s a 76T6 multi-mode radar and the anti-ballistic missile 77T6 radar.

The longer-range surveillance radars are claimed to have a maximum range of 1,242 miles when it comes to a ballistic missile target, but a non-stealth fighter-type target may only be targetable within 170 miles. A single battery can coordinate up to ten simultaneous missile engagements.

The S-500’s missile defense capabilities will come in a timely fashion, as the United States is poised to rapidly deploy many short- to intermediate-range missile systems in the 2020s following the death of the INF treaty in 2019. As these weapons are (at least initially) are intended for use with conventional warheads, they are more likely to see use than intercontinental-range nuclear missiles. It is unclear, however, how and to what extent the S-500 has been tailored to address the characteristics of hypersonic glide-vehicle type weapons, which may approach more evasively and on a flatter arc than a ballistic missile.

The S-500 is also often vaguely touted as having anti-stealth aircraft capabilities. Rather than some anti-stealth kryptonite, this likely refers to technological enhancements of existing counter-stealth techniques using multiple radars (multi-static tracking) and low-band systems.

Such methods can detect the presence of stealth fighters, but usually without enough precision to provide a firing solution, save at very short range. Russia’s air defense system thus relies on interceptor aircraft to close in on a stealth jet’s estimated position and ferret them out up close using infrared sensors and active X-Band targeting radars.

That said, S-500 units are specifically designed to integrate their sensors to network with existing air defense systems with different capabilities. Its software reportedly even automatically distributes targeting cues to other air defense systems, so that each is assigned a target appropriate to its capabilities and cost, lowering the demands placed on the S-500’s premium missiles. Izvestia has particularly showcased the S-500’s integration with the Pantsir-SM short-range air defense system, which would be tasked with shooting down anti-radar missiles likely to be lobbed at an S-500’s radars in a conflict.

Once deployment of the S-500 around Moscow is complete, later units are likely to show up at hotspots like Kaliningrad, the Crimean peninsula, the Kurile Islands, or perhaps Russian military bases in Syria. Not only could these provide a defensive boost, but the system’s long range could allow it to monitor and threaten aircraft in large swathes of the surrounding waters (ie. the Baltic, Black Sea, Mediterranean and Sea of Japan).

Practically, such so-called ‘anti-access’ bubbles are less immediately problematic to jet fighters than to transports and airliner-based surveillance, command and control and tanker aircraft that can be detected from further away and that may lack the agility to evade a long-range missile. That could “push back” such aircraft in a conflict, constraining their ability to support fighters from backfield. A downside to forward deployment of S-500s, however, is that it would place these important defensive assets within easier reach of attack.

Moscow has also hyped the possibility of exporting the S-500, with Turkey even claiming in 2019 it might manufacture components of the system. Other clients likely to be interested include India and its rival China, both operators of the S-400. However, any exported S-500 would likely be downgraded so as not to compromise Russia’s strategic defenses to potential future rivals like China and Turkey.