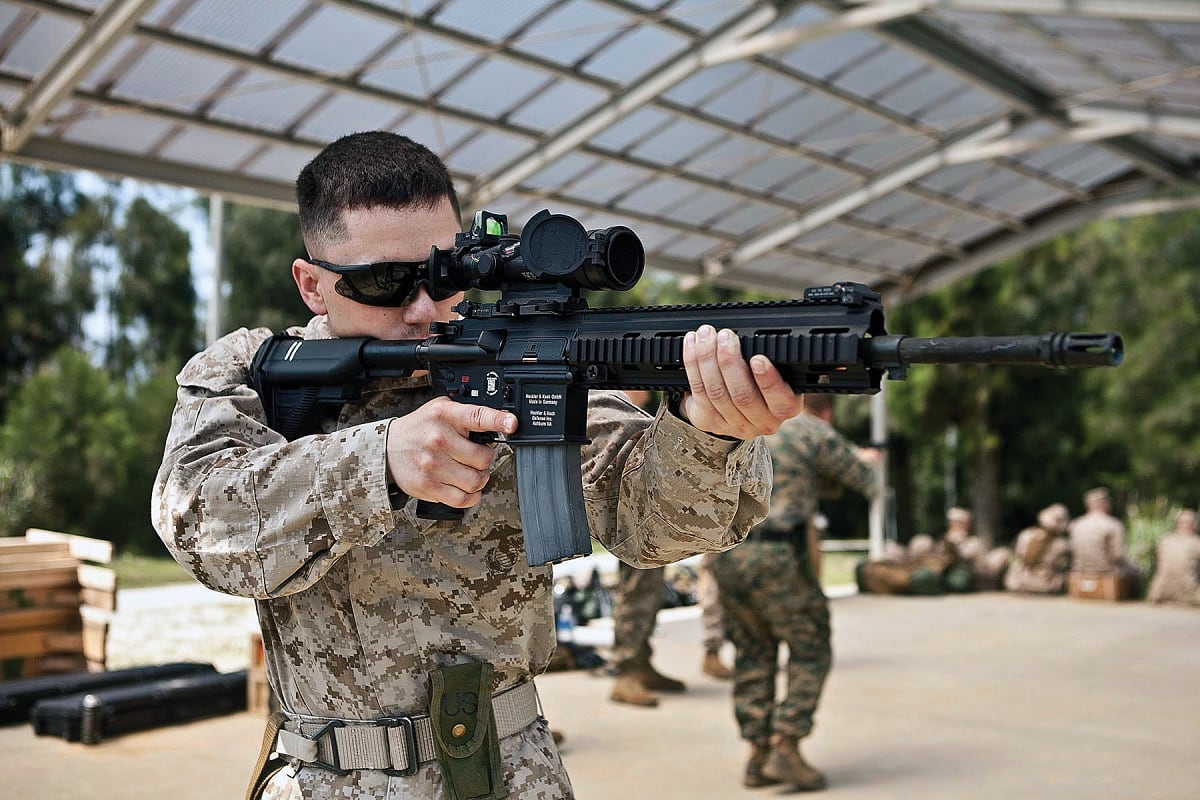 CAMP HANSEN -- Lance Cpl. Zachary A. Whitman, a shooter with the III Marine Expeditionary Force detachment, familiarizes himself with the M27 Infantry Automatic Rifle in preparation for the Australian Army Skill at Arms Meeting 2012. AASAM is a multilateral, multinational event allowing Marines to exchange skills tactics, techniques and procedures with members of the Australian Army as well as other international militaries in friendly competition. (U.S. Marine Corps photo by Sgt. Brandon L. Saunders/released)

George W. Bush weighed in this week on the complete American withdrawal from Afghanistan by Aug. 31, lamenting the absence of U.S. and NATO troops in Afghanistan. He specifically cited his concern for the oncoming civilian slaughter and the oppression and trafficking of women and girls that’ll be in our headlines soon.

He’s right that we should stay, temporarily, but wrong about the reasons. The reason we should stay, again temporarily, is not because we’re going to make the investment in blood and treasure to materially change conditions on the ground, but because we never put together a plan for Sept. 1 of the type that can prevent another September 11th.

But, we’re gone. The midnight move out of Bagram is done, and 45 days from now everyone else is out too. The debate has been had and won; the American people spoke and were listened to, if belatedly. Yet, it’s imperative to fight the tendency to regard those who express concern about leaving Afghanistan as proponents of forever wars, and for our legislators to start asking serious questions.

We’re past due to have the corollary conversation, the one about the risk to the U.S. homeland. Because we didn’t just depart Afghanistan. We departed without a convincing plan to protect American security or even with the basics – like overflight rights critical to any ‘over the horizon’ strategy – figured out.

The Biden administration wants to avoid any Saigon-like scenes as the United States pulls out of Afghanistan – certainly to prevent the immediate human tragedy, but also to avoid the public relations pitfalls that are a natural accompaniment of military retreat. With deftly executed plans like the midnight move out of Bagram, Biden is likely to avoid any infamous scenes or photographs in the remaining forty-five days or so of the U.S. presence.

That pressure to avoid any final embarrassment grows the closer we get to the twentieth anniversary of 9/11, as we honor those who died in the attack and reflect on the fight against militant Islam we launched. A fight we undertook to prevent more American dead in business casual clothing, responding not just in anger but in a classic just war. The further we get from that day, the easier it is to forget, and the American people have spoken: there is no consensus for remaining in Afghanistan.

So, we’ve spoken, but there is a necessary corresponding conversation drowned out in the overfocus on the specifics of withdrawal. Each of the security risks and problems that drew us into Afghanistan remain, and the period of risk we are entering now is greater and more complex than the thin ‘over-the-horizon strategy President Biden plans.

That these problems remain so little changed is surely a stunning indictment of U.S. foreign policy, and domestically we created cynicism with the bureaucratic heavy-handedness of pat-downs and color-coded threat levels and acronyms. Those acronyms evolved as terrorist groups grew in power and expanded their physical territory in Pakistan, Yemen, Iraq, and Syria, with international attack planning guaranteed to follow. But of the acronyms kicked around in the 2000’s by the intelligence community that would filter out to the cable news shows and armchair experts, one stands out: AQSL. Al-Qaeda Senior Leadership.

Ayman Al-Zawahiri and other remaining members of the old guard – those who approved, helped plan, and funded the waves of complex attacks against us and our allies – are likely in Afghanistan right now if not comfortably across the border. As the Taliban expand their territory over the next few months a corollary reasserts itself, one that never went away. The expansion of Taliban territory is the expansion of al-Qaeda’s ability to project power – in the only manner they know how and with consequences outside of Afghanistan. President Biden has incorrectly concluded that he can mitigate the terrorist threat to the United States via proxy funding and targeted airstrike. This is 1998 thinking and it’s not just outdated; history has proven in wrong, and painfully. These are the same debates we had when Bill Clinton was in office, and they ended with fifteen of the nineteen hijackers in the country by the time he departed.

Over time pinprick airstrikes will become less effective and less coordinated, yet more likely to kill civilians. Our intelligence agencies know the territory and the players, they are good at the dark arts of guerilla sabotage and infiltration. But it won’t be enough. Blind spots will accumulate, incentives for cooperation will diminish, tactics and alliances will shift, and the United States will again be caught surprised by the maturity of attack planning emanating out of the region. Physical real estate for militant Islam equals complex international attacks. That fact will not be undone by us wishing it away.

The threats haven’t disappeared, and our choices guarantee they’ll become more serious and harder to identify at the exact same time. Looking back on any new attack, we may again be tempted to use the term ‘intelligence failure,’ but in truth it’ll be a comprehensive and predictable foreign policy failure.

A recent U.N. estimate suggests that the Taliban now controls about half of the territory of Afghanistan, with advances into important provincial capitals accelerating the takeover. That seems abstract when we hear it. Imagine half of the land of the U.S. – and an increasing number of state capitals – overthrown. In each of those provinces over the past few years, an American helicopter or armored truck pulled out of those bases for the last time, dozens of slow motion Saigons and tragedies we left behind that won’t make the news.

At least halfway to a total coup and even closer to disintegration and that’s with the civil war just now heating up. That’s where Afghanistan is now, and al-Qaeda is likely fighting directly alongside the Taliban in some provinces as a participant in the regime change. Another estimate suggests that either in Taliban hands or contested control is virtually the entire swath of land bordering Pakistan. America may not be interested in Afghanistan, but al-Qaeda is, and they outlasted us there.

We’ve seen this before, and we know how it ends.