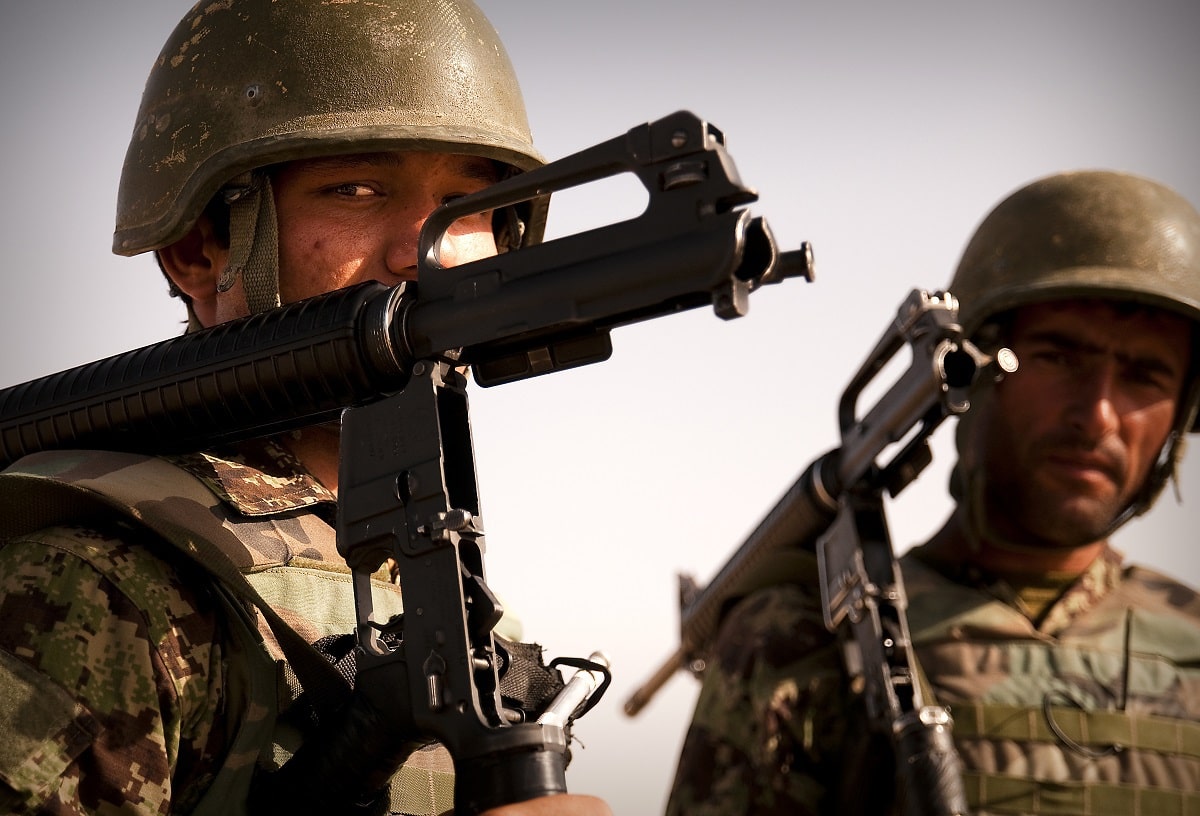 FORWARD OPERATING BASE GERONIMO, Helmand Province, Islamic Republic of Afghanistan Ñ Afghanistan National Army Sgts. Bashir Allahmurrad and Abdul Ahad, both assigned to 1st Kandak, 1st Brigade, 215th Corps, wait for their rifles to be cleaned and inspected before firing at Range Juarez near Forward Operating Base Geronimo May 25. Allahmurrad has been in the ANA for two years and said he joined out of patriotism. ÒI wanted to serve my country and protect my country,Ó he said. ÒI like my country and I want to kill the enemies of my country.Ó (Official Marine Corps photo by Sgt. Mark Fayloga)

There is an old joke about French military rifles: “never fired, only dropped once.” No doubt similar jokes will make the rounds about the Afghan National Army in the days and weeks to come, and it is likely that in the annals of military history it will earn a place as the least effective fighting force ever.

In under a month, the largely under-equipped Taliban managed a complete military takeover of Afghanistan. It met little to no resistance from the U.S.-trained and U.S.-equipped Afghan Army, and the insurgent force was able to capture every major city including the capital of Kabul with hardly a shot fired. What is also notable is that in addition to not really putting up a fight, the Afghan soldiers didn’t exactly surrender – they simply fled.

Reuters reported that hundreds of Afghan soldiers fled to neighboring Uzbekistan over the past weekend with some 22 military planes and 24 helicopters. It was hardly an organized withdrawal – and the Uzbek defense ministry announced that one of the Afghan aircraft had collided with an escorting Uzbek fighter jet, which resulted in both crashing. In total, 585 Afghan soldiers arrived via aircraft while another 158 crossed the border on foot, the Reuters News Agency reported.

Additionally, the Uzbek defense ministry had confirmed that it had also shot down an Afghan fighter that violated its airspace.

Not the First Time

The warning signs that the Afghan Army’s heart wasn’t in the fight had been coming for weeks but were seemingly ignored by the Biden administration, which had repeated that the government in Kabul was willing and able to take the reins in combating the Taliban. It should have been clear that the Afghan Army wasn’t going to put up a strong resistance after more than 1,000 troops had fled to Tajikistan after clashing with Taliban militants in early July.

That was actually the third time that Afghan forces had fled to its northwestern neighbor. In total, nearly 1,600 soldiers had crossed the border by July 5, the BBC reported last month.

The situation had become so serious in July, that Tajik President Emomali Rahmon had ordered the mobilization of some 20,000 reserve troops to maintain order at the border. The Tajik government had repeatedly said throughout July that it would not interfere in internal Afghan matters, and Russian Federation President Vladimir Putin – a key ally of Rahmon’s – said that Russian forces could be deployed to the former Soviet republic to help secure the border with Afghanistan if needed.

Afghan forces had been retreating over the country’s borders with its Central Asian neighbors on multiple occasions since the Taliban began its advance as the U.S. began its withdraw of forces in May.

Yet, despite these warnings that the Afghan Army was looking to run and not fight, the Biden administration continued to double down that it expected Kabul to stand up to the Taliban.