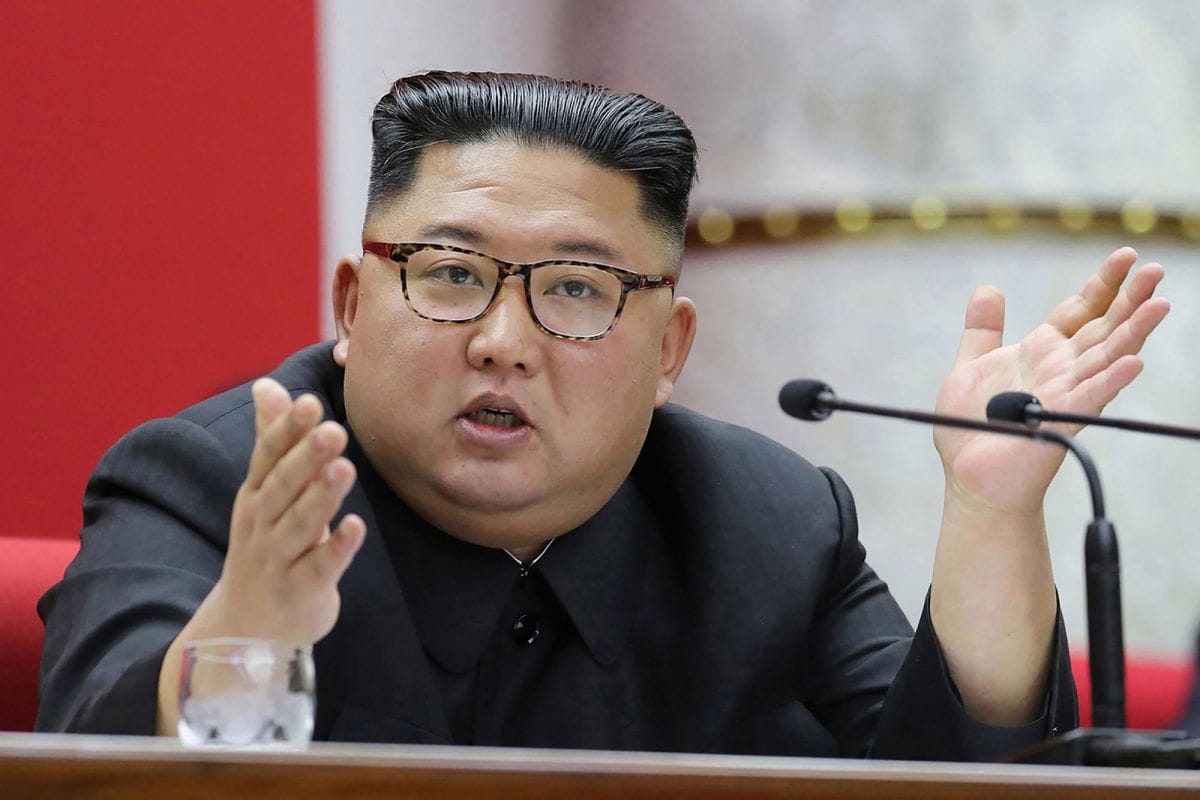 Her comments, a change from the regime’s generally cold shoulder stretching back more than two years, no doubt will raise hopes in the ROK, and especially in the Moon administration, which has desperately been attempting to revive bilateral talks before next year’s presidential election. However, President Moon Jae-in risks playing Charlie Brown as the North Korean Lucy again pulls the ball away at the last minute, leaving Moon humiliated once again.

Kim’s statement is fine exhibit of North Korean agit-propaganda. First, no credit is given to Moon’s steadfast efforts at reconciliation, even though he is a prototypical South Korean progressive who has been viciously attacked by the opposition for seeking to improve relations.

Rather, Kim cited the South Korean public supposedly determined to join with the North despite Seoul’s obstruction. Apparently in a magnanimous mood, she agreed: “I felt that the atmosphere of the south Korean public desiring to recover the inter-Korean relations from a deadlock and achieve peaceful stability as soon as possible is irresistibly strong. We, too, have the same desire. There is no need for the north and the south to waste time faulting each other and engaging in a war of words at present, I think.”

Next, Kim insisted that Seoul speak respectfully if it hoped to proceed. This from a regime that leaves no insult unsaid, and for which Kim has become the principal mouthpiece. She demanded: “If south Korea sincerely wants the inter-Korean relations to be recovered and to make sound development, it should think twice to make a right choice before saying anything. For instance, it had better stop spouting an imprudent remark of ‘provocation’ against us that may trigger a war of words.” The complaint about provocation comes from the representative of a regime that in the past routinely threatened to turn other nations’ cities into lakes of fire.

Then Kim denounced “double-standards,” which the North “can never tolerate.” That should be a laugh line since it is difficult to imagine a country that does not employ double standards, none more often than the Democratic People’s Republic of Korea. Yet she also made a serious point:

“The U.S. and south Korean-style double standards towards the DPRK by which the DPRK’s actions of self-defensive dimension to cope with the military circumstances and possible military threats existing on the Korean peninsula are dismissed as threatening ‘provocations’ and their arms buildup are described as the ‘securing of a deterrent to north Korea’ are illogical and childish, and are a blunt disregard of and challenge to the sovereignty of the DPRK.”

At least before producing nuclear weapons the country most at risk in Northeast Asia was North Korea. The ROK enjoys vast advantages in most measures of power. And Seoul is backed by the world’s superpower, which has proved that it is ever ready to impose regime change. The result then tends to be, shall we say, “adverse” to the local ruler, as Libya’s Muammar Khadafy discovered painfully a decade ago.

However, Kim’s self-righteous tone ignored an even broader double standard. Having attempted to forcefully swallow the ROK in 1950 and thereafter initiated manifold violent incidents, the North cannot be trusted. Actions it claims to be defensive might be, but maybe not. The burden of building trust falls most heavily upon the North.

However, Kim obviously believed that a strong defense requires perpetual offense. So, she said, the South must modify its behavior to convince Pyongyang to engage. She explained: “I only hope that the south Korean authorities’ moves to remove the tinderbox holding double standards bereft of impartiality, the hostile policy toward the DPRK, all the prejudices and hostile remarks undermining trust are shown in visible practice.”

Aside from the extraordinary chutzpah of this demand—speaking of hostility, who destroyed the Korean liaison building constructed at great cost by Seoul?—the standard also is wonderfully ambiguous. The North tends to define anything that it doesn’t like as part of “the hostile policy.” So, too, “prejudices and hostile remarks undermining trust,” which in Pyongyang’s view could be most anything. The DPRK is likely to constantly ask for more, making it impossible for the South to ever do enough.

Of course, if the demand isn’t met, Kim suggested with just a hint of menace that the outcome might not be good: “I won’t predict here what there will come-a balmy breeze or a storm.” Reinforcing this almost offhand threat is the latest North Korean missile launch, supposedly a hypersonic missile.

Sometimes the North’s claims represent more aspiration than reality, but the regime generally does not stray too far from genuine plans. Reported the Washington Post: “The South Korean military said Pyongyang appeared to still be in the early stages of development of its hypersonic weapons system, and said that South Korea and the United States are currently capable of detecting and intercepting this missile.”

However, The DPRK’s missile and nuclear programs have demonstrated steady and significant progress over the years. Observed the New York Times: “Pyongyang has been in a dizzying sprint to build an arsenal that contains the kinds of advanced capabilities you would find in the United States or Russia.” Of particular note is the recent estimate by the Rand Corporation and Asan Institute that the North could have 200 nukes in just six years.

Still, Kim’s statement offers at least a small opening for contact and talks. If her conditions are met, “when impartiality and the attitude of respecting each other are maintained” and “smooth understanding between the north and the south” is possible. Then, she added, “several issues for improving the relations—the reestablishment of the north-south joint liaison office and the north-south summit, to say nothing of the timely declaration of the significant termination of the war—[can] see meaningful and successful solution one by one at an early date through constructive discussions.”

That is the trifecta sought by Seoul: renewed liaison meetings, another leaders’ summit, and a peace declaration. With those on offer the Moon government should respond positively—but with caution and restraint. It doesn’t want to act so desperate for an agreement, any agreement, that it falls for a bait and switch routine and trades away important interests. Rather, the ROK should engage confidently, insisting that the North act in accordance with its demands of Seoul by ending the DPRK’s demonstrated hostility to South Korea and show proper respect to the Moon government.

Moon has an impressive personal as well as professional background, but like many South Korean progressives he has been too eager to reach an agreement with the North, encouraging the North Koreans to make more outrageous demands and engage in more extreme behavior, such as blowing up the liaison office. Although recognizing the importance of engaging rather than isolating Pyongyang, the left in the ROK too often seems to excuse DPRK misbehavior, acting as if North Korea’s history of threats and violence resulted from inadequate South Korean and American deference.

Moon should address the North from a position of strength. Kim Jong-un wants sanctions relief and South Korea would be his best economic partner in the future. Moreover, Moon should emphasize that the election to select his success is less than six months away. With his party holding a strong legislative majority, he is in position to move any agreements forward before he leaves office. Afterward, however, Kim may face a much more hostile reception.

Moreover, Moon should make a strong pitch to the Biden administration to strengthen his negotiating position by offering to ease or suspend sanctions to allow modest inter-Korean development projects. They could be offered as small examples of future possibilities should the two Koreas move toward a genuine détente. Achieving some success now would help maintain an improved relationship even if the Blue House changed hands.

Of course, Kim Yo-jong’s latest comments may merely lead to another seemingly pointless political game with a frustrating end. Such is the risk of dealing with the North. However, after effectively sanctioning itself, the DPRK is hurting economically and desperate for relief. Pyongyang also is uncomfortably dependent on China, something Kim Jong-un originally avoided after taking power.

The North is very unlikely to give up all its nukes and missiles, but appears willing to trade some weapons limits for some sanctions relief. Reaching a deal won’t be easy, but it will be impossible unless the parties start talking. Which is why it is important for the South to take up this opportunity and for Washington to back the ROK’s effort.

Peace is in the interest of North and South Korea, China and the U.S. Neither war nor sanctions are likely to deliver a stable and secure peninsula. Hence Seoul should accept the North’s apparent invitation to parlay. But President Moon should do so without illusion or expectation. That would be a fitting coda to his presidency.

A 1945 Contributing Editor, Doug Bandow is a Senior Fellow at the Cato Institute. A former Special Assistant to President Ronald Reagan, he is author of several books, including Tripwire: Korea and U.S. Foreign Policy in a Changed World and co-author of The Korean Conundrum: America’s Troubled Relations with North and South Korea.