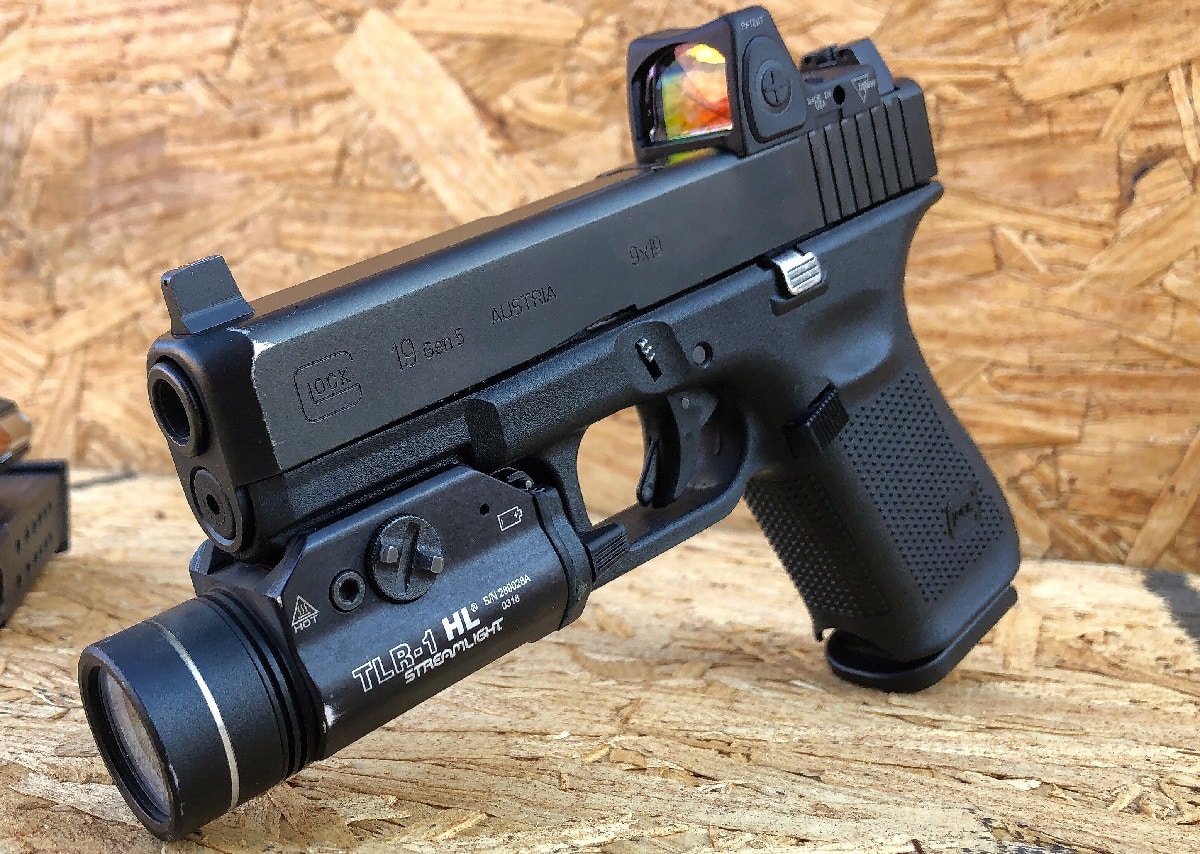 Polymer-framed, short recoil-operated semi-automatic handguns are quite common today–but it actually all began nearly 40 years ago when curtain-rod manufacturer and tinkerer Gaston Glock introduced his Glock 17. When the handgun made its debut in 1982, it didn’t exactly take the world by storm, yet the 9x19mm pistol was selected to be the standard firearm for the Austrian military.

The U.S. military actually went another direction however and selected the more traditional Beretta M9. However, the Glock caught the eye of movie makers, and that in turn made the gun almost legendary.

Development and Introduction of the Glock

Gaston Glock wasn’t actually a gun designer. But he did hold a number of patents for products that utilized polymer components. When he learned that the Austrian Armed Forces were in the process of selecting a new firearm in the early 1980s, Glock set out to develop a new firearm – and while it was arguably more evolutionary than revolutionary – it used new materials that made for a lightweight weapon that offered far greater ammunition capacity.

Where other designers often went it alone, Glock assembled a team of Europe’s leading handgun experts to help define the most desirable characteristics required in a combat pistol. In just three months, Glock developed a working prototype – and it was notable in that made use of synthetic materials as well as modern manufacturing technologies.

The use of polymers was of course noted not only by the Austrian military, but by the American media. A lot of it was due to erroneous reporting that suggested the gun was made of plastics and other materials that wouldn’t set off metal detectors. Then of course there was the film Die Hard 2, which featured the completely fictional “Glock 7.” In the film, it was described as being a porcelain gun made in Germany that doesn’t show up on airport X-ray machines, and costs more than what the Washington D.C. Airport’s chief of security would be paid in a month.

That was nonsense required as a plot point, yet throughout the early 1990s, the media expressed concern that the gun could be used by hijackers. Eventually commonsense prevailed and the facts were made clear that the handgun couldn’t avoid metal detectors and would certainly show up on X-ray scanners.

Yet, thanks to the inclusion in Die Hard 2, the handgun also became one of the most widely used weapons in cinema.

From Hong Kong to Hollywood

What is also worth noting about the history of the Glock is that Bruce Willis didn’t actually carry the Glock in Die Hard 2. As Lt. John McClane of the Los Angeles Police Department (LAPD), Willis carried a Beretta 92FS – which had been the standard-issue sidearm of the LAPD at the time. The Glock 7s – which were actually Glock 17s – were seen only employed by the U.S. soldiers-turned-rogue-operatives. Among them was future Terminator 2 star Robert Patrick. However, as far as the first American action star to carry a Glock, that distinction actually goes to Mickey Rourke, who carried one a year earlier in 1989’s Johnny Handsome.

Yet, the actual “first appearance” of a Glock on the big screen was in the Hong Kong action-cinema film Tiger Cage in 1988 when it was carried by newbie detective Carol ‘Do Do’ Cheng. Thus it was Hong Kong not Hollywood that first introduced the polymer-framed handgun to the masses.

Glock 17s would then go on to be seen in such films as 1992’s Hard Boiled, John Woo’s own Die Hard-style film where the handgun was again primarily used by the various henchmen; then in The Fugitive (1993), Blown Away (1994), Rush Hour (1998) and even The Da Vinci Code (2006). The Glock 19, the compact version that has also been adopted by law enforcement, was first seen carried by James Woods in 1991’s The Hard Way, and was carried by Judd Nelson the same year in New Jack City.

As for Bruce Willis; while he didn’t get to use the Glock in Die Hard 2, he did carry a Glock 17 as the villainous title character in 1997’s The Jackal, and then a Glock 19 in the heist-comedy Bandits in 2001. His John McClane character also finally was able to use a Glock 22, the full size pistol chambered for the .40 S&W cartridge, in Live Free or Die Hard.

Appearing in some 500-plus films, the Glock in various models have become the “go-to” handguns for movies and TV, and while it is rarely called out by name – at this point, it has become so iconic it is hard to miss.