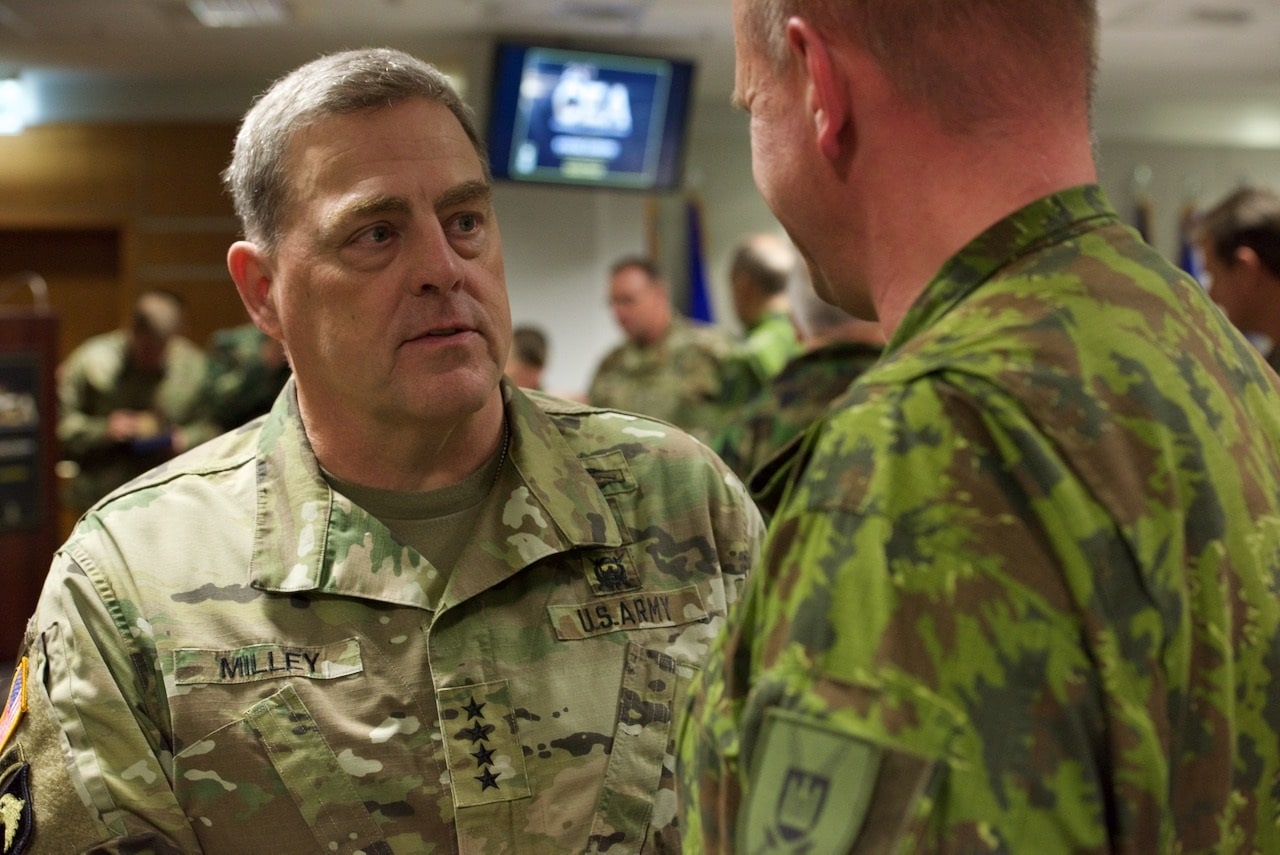 WIESBADEN, Germany -- Gen. Mark Milley, then Chief of Staff of the U.S. Army, speaks with participants of the 23rd annual Conference of European Armies held in Wiesbaden, Germany. The conference was hosted by Lt. Gen. Ben Hodges, commander of U.S. Army Europe, and focused on the current security environment, how to win in a complex world and freedom of movement throughout Europe.

Since the early post-9/11 days when a frightened America looked to the military to calm their fears, we have lionized any who wore the uniform as heroes, none more than general officers. Now 20 years on, the ugly, unintended consequences of such blind faith are starting to emerge in ways that pose an increasing danger to the Republic.

The unquestioned loyalty we gave to military members in the aftermath of the September 2001 terror attacks was entirely understandable. The destruction of the World Trade Center towers and the images of a torched Pentagon shook most Americans to the core. But as individuals, we were powerless to do anything to quench our fears and anger. Our uniformed service members, however, were more than adequate for the task.

The power demonstrated in our lightning take-down of the Taliban regime and the gouging of al Qaeda by early 2002 filled most in this country with pride. Even though we later realized the invasion of Iraq was ordered on spurious grounds, the demonstration of the power of the U.S. Armed Forces sweeping to conventional victory in 2003 deepened our sense of security.

As the Iraq war descended into an ugly insurgency by late 2004 and the Afghanistan war deteriorated soon thereafter, however, our troops started suffering significant casualties. Those upon whom we relied for our sense of safety were being killed and wounded in large numbers. A grateful nation began to lavish praise and honor on all who wore the uniform.

But that adulation developed into a blind trust in which every word spoken by a person in uniform was accepted without question – and that trust enabled some service members, especially of those with the highest rank, to escape scrutiny for their actions.

This unfortunate situation resulted in the near absence of any senior officer being held to account – even when their actions resulted in significant failure – creating a sense of impunity in our top leaders. The consequences of this “free pass” being given to our senior leaders has been severe for the United States. A few key examples illustrate the scale of the problem.

In 2009 then-Brigadier General James L. Terry was the Director of the Future Combat Systems, the U.S. Army’s then-premier modernization program. In March 2009 the Government Accountability Office wrote in a congressionally-mandated report that FCS was a “high risk” for failure, in large measure because six years earlier the Army had launched the program “without determining whether the concept could be successfully developed… without proven technologies, a stable design, and available funding and time.”

One month after the GAO report, Secretary of Defense Robert Gates canceled the program after six years and $20 billion were wasted, citing “significant unanswered questions concerning the FCS vehicle design strategy.” Terry’s “punishment” for directing an organization that had failed so spectacularly? He was promoted, eventually to a three-star commander in Afghanistan – where, in 2013, he declared that the Afghan Security Forces had made “very real” progress that was “unmistakable and very substantial.”

Also in 2013, Supreme Allied Commander in Afghanistan Gen. John R. Allen, claimed that the U.S. and allied forces had achieved success.  Though victory, “may never be marked by a parade,” Allen admitted, “This is victory. This is what winning looks like, and we should not shrink from using these words.”

As the entire edifice of the Afghan national security establishment fell like a house of cards over a period of mere days last month, it is evident that both Terry and Allen were breathtakingly wrong in their effusive praise of the Afghan military’s capabilities. Yet Terry was further rewarded for his failures by ending up joining scores of former generals entering the “revolving doors” landing a lucrative defense contractor position and Allen was elevated to become the President of the prestigious Brookings Institute.

There are many other former generals who have equally egregious track records on Afghanistan – like David Petraeus, John Campbell, Curtis Scaparrotti, Joseph F. Dunford, and Stanley McChrystal – but what may be the most egregious abdication of responsibility of late is Gen. Kenneth F. McKenzie, commander of U.S. Central Command.

On August 29, just two days before the final American troop would leave Afghanistan and three days after 13 American troops had been murdered by a suicide bomber outside the Kabul airport, American drone operators launched a strike near the airport that killed 10 people. U.S. authorities initially claimed the strike hit ISIS bombmakers that were preparing to attack more Americans. But as the New York Times uncovered, the victims hadn’t been ISIS fighters but innocent civilians – including seven children.

In a press conference last Friday, Gen. McKenzie confirmed the Times’ story, offered his “sincere apology,” and added, “(a)s the combatant commander, I am fully responsible for this strike and its tragic outcome.”

Chairman of the Joint Chiefs of Staff, Gen. Mark Milley, defended the strike even after admitting the military struck the wrong target, offering that in a “dynamic high-threat environment, the commanders on the ground had appropriate authority and had reasonable certainty that the target was valid.” McKenzie added to the justification, claiming that U.S. officials “did not have the luxury” of time. But in this both he and Milley are dead wrong. Here’s why: The strike was an unforced, avoidable error. 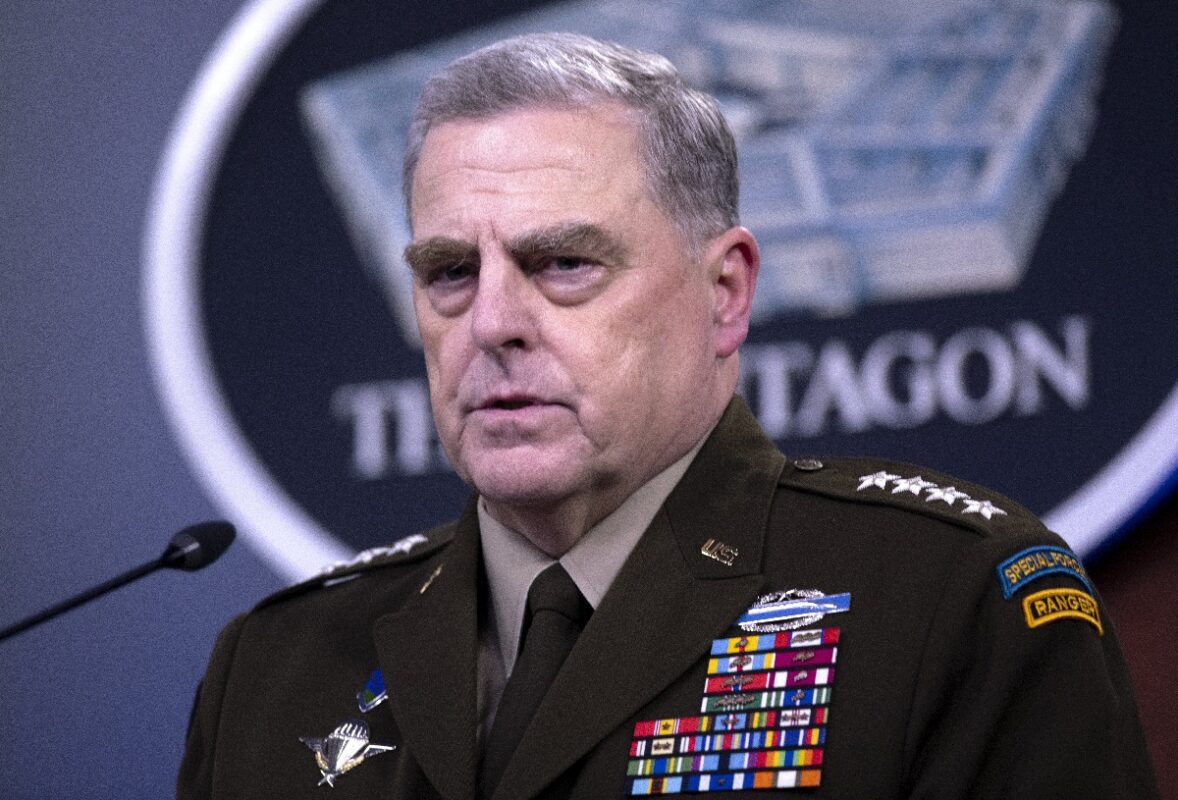 Everyone understands that the tensions at the time were through the roof: American troops had just been killed by a suicide blast, more attacks had been threatened, and the final phase of the withdrawal would be the riskiest. But ‘hard’ does not justify carelessness.

Once a drone operator has the target in his site, they can follow it indefinitely (handing off to another drone platform if fuel runs low). When the U.S. team identified the target vehicle with the suspected explosives park in a garage, all they had to do was watch and wait. If the vehicle were to leave and begin to close in on U.S. troops, then commanders would have more justification to launch the lethal missile.

Had the commander done that, then no innocents would have been killed – because by taking the additional time, the operators would never have fired because the vehicle would never have moved to attack U.S. troops. Instead, someone in the chain of command carelessly authorized the missile launch out of impatience and now three adults and seven children are dead.

General McKenzie said he accepts responsibility for what happened. If that’s true, then he needs to turn in his stars. It can’t be that general officers keep making mistake after mistake, often costing people their lives, and yet somehow always avoiding accountability for their actions. For well over a decade general officers have demonstrated awful judgment or outright lied to the American people about alleged progress in the Afghan war. It can no longer be acceptable to allow our highest-ranking officials to avoid censure for mistakes while perversely being handsomely rewarded for failure.