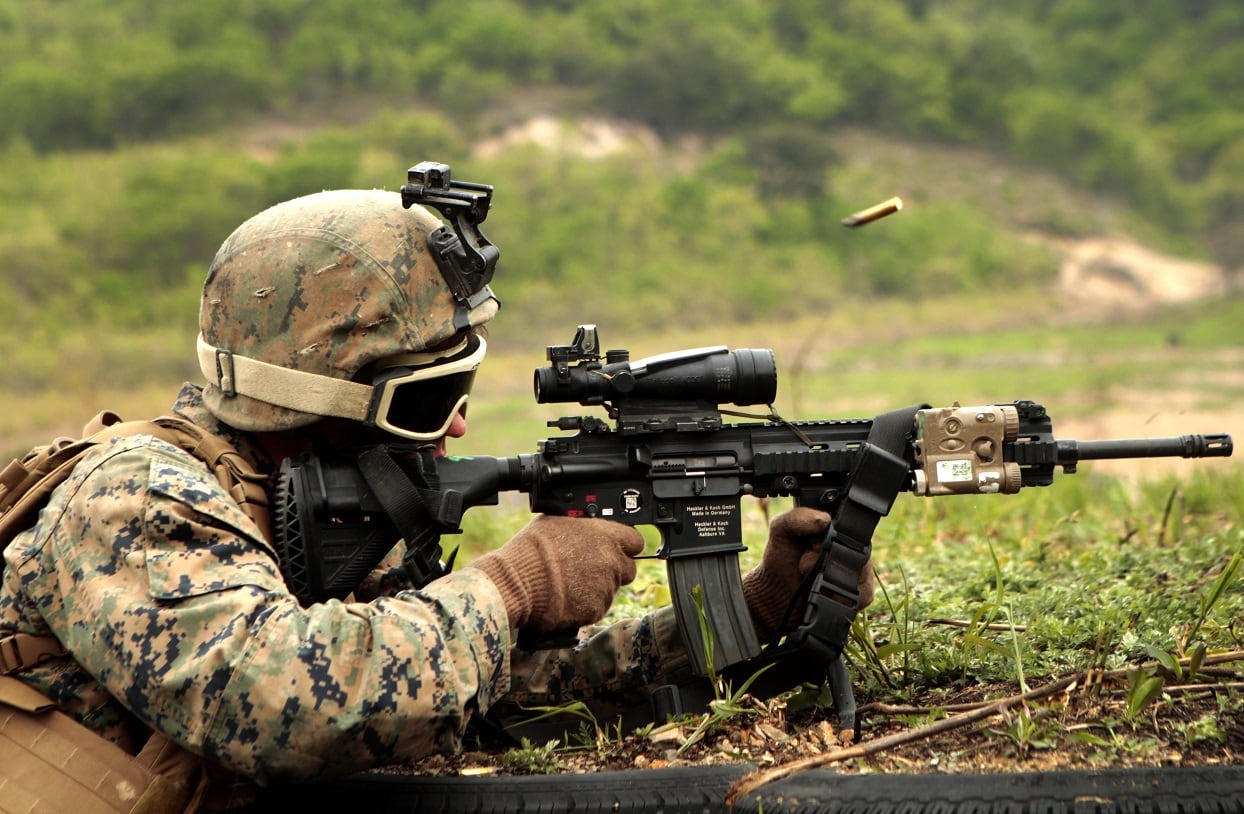 A Marine with 1st Battalion, 3rd Marine Regiment, currently assigned to 4th Marine Regiment, 3rd Marine Division, III Marine Expeditionary Force as part of the Unit Deployment Program, provides suppressive fire with an Infantry Automatic Rifle during a combined arms live-fire exercise April 29 at Suseong-ri Firing Range. The exercise was conducted as one of the final training events of exercise Ssang Yong 13. Ssang Yong, which means "twin dragons," is an annual exercise designed to strengthen the interoperability and increase the capabilities of both Republic of Korea and U.S. forces.

The AV-8B Harrier II is a vertical, short take-off and landing jump jet. It can raise up like a helicopter and then jet off quickly horizontally. This thing is armed like you couldn’t imagine. It has a 25mm gatling-style rotary cannon. It can be loaded with rocket pods, Sidewinder missiles, AMRAAMs, Maverick air-to-ground missiles, laser-guided bombs, and Joint Direct Attack Munitions. You name it, this airplane has it.

This Harrier has been around so long (since the Vietnam War in the late 60s) because it is incredibly versatile. Name a mission and the Harrier II has probably done it. Deep attack for enemy command and control centers; intercepting and dog fighting; armed reconnaissance; escorting helicopters, and close air support – all can be accomplished with the Harrier II.

Marine snipers love the M-110. This looks like the familiar M-16A3 or M4 carbine. But don’t let that fool you. Instead of the NATO 5.56mm round, it fires a 7.62mm round. It has a quick-change 20-round magazine, so you don’t have to worry about working a slower bolt-action rifle. It has the rail system to mount different types of sights. The accuracy comes from its 20-inch Chromoly 5R Cut rifled barrel.

It weighs a manageable 14 pounds unloaded. The action is gas-operated with a rotating bolt. It has an effective range of 875-yards.

The M72 LAW is a should-fired 66mm anti-tank weapon. The LAW has a high velocity at 650-feet per second. The effective range is about 250-yards. Maximum range is around 1,000 yards. At only five pounds, the low weight is a selling point. The LAW is very portable – simply sling it over your shoulder. This portability allows you to carry an M4 and a basic combat load of ammunition. The LAW is an extremely popular weapon beyond the Marine Corps. It has been used by dozens of countries in numerous wars.

The M252 81mm Mortar is ideal for Marine Infantry. The M252 is a medium-range mortar that can engage targets between 4,500 to 5,650 yards. The M252 is lethal and accurate. It’s best against enemy troops in the open. It can fire a maximum rate of 33 rounds per minute. Sustained firing is between eight and sixteen rounds per minute. The downside to the M252 is its weight. There are three heavy components: the cannon assembly is 35 pounds; the bipod assembly is 27 pounds; and the baseplate is 26 pounds. The cannon is 50 inches long. But design is simple, and assembly of the components is straight-forward. A good mortar crew will slowly hone into its target with great explosive effect.

The Avenger air defender is a surface-to-air missile system that is mounted on a HUMVEE. The system is for taking out enemy helicopters, airplanes, drones, and even some cruise missiles. Since it is deployed on a HUMVEE, the Avenger is highly mobile and can shoot on the move.

The turret rotates 360-degrees and each pod holds four Stinger missiles or eight total. The Stinger is a two-stage, solid-fuel, MACH 2.2 surface-to-air missile. The system still aims fine when the HUMVEE is moving.

A forward-looking infrared (FLIR) sensor allows the Avenger to be used at night and in all-weather conditions. Sadly, the Marine Corps migrated away from using the Avenger during the mid-2000s and is now developing its own new ground-based air defense system.

The Harrier II easily wins the competition for the deadliest weapons systems in the U.S. Marine Corps. It simply carries so many armaments that you have to love it. The vertical take-off is important too. The M110 sniper rifle, the M72 LAW, and the M252 mortar are all great weapons for marine infantry units. They can each cause a lot of enemy casualties. The Avenger has seen better days, but I really like the mobility of the system that is mounted on a HUMVEE.