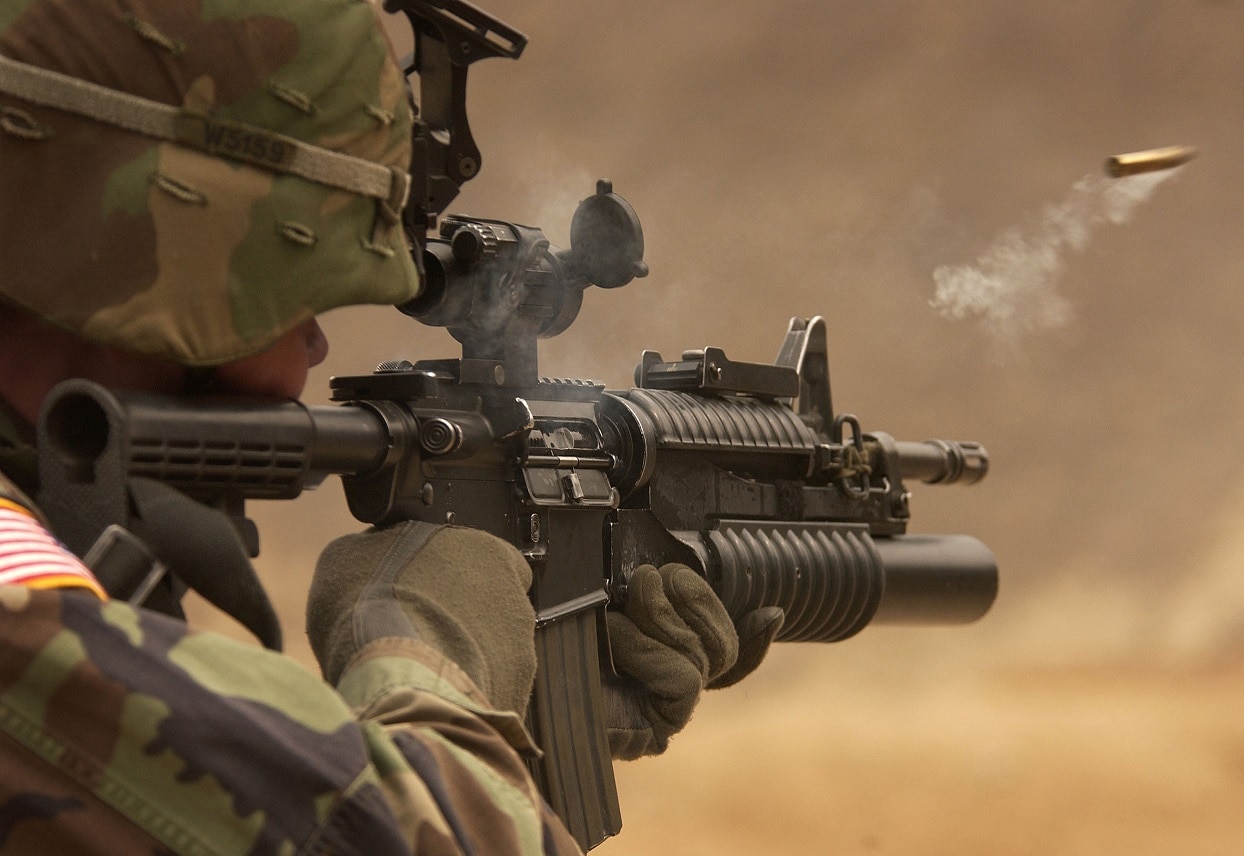 A shell casing flies out with a trail of smoke as U.S. Army Pfc. Michael Freise fires an M-4 rifle during a reflex firing exercise at the Rodriguez Live Fire Complex, Republic of Korea, on March 23, 2005. Freise is attached to the 1st Battalion, 72nd Armor Regiment, which is taking part in exercises Reception, Staging, Onward movement, and Integration/Foal Eagle. The annual, multi-phase exercise is tailored to train, test, and demonstrate U.S. and Republic of Korea force projection and deployment capabilities.

How would you like a powerful computer mounted on your M4 carbine? That’s what U.S. Army soldiers are now testing. This gem would give valuable intelligence about the target you are aiming at. The system features a video augmented reality feature connected to a heads-up display to change the way weapons are aimed.

ARCAS uses a video camera to give soldiers more information about targets, such as the range and how the shooter needs to correct his or her shot. ARCAS has built-in maps to enable soldiers to conduct their own intelligence, surveillance, and reconnaissance. The system also allows soldiers to talk to their squad and platoon leaders through the rifle.

ARCAS tracks the number of rounds available in the heads-up display and could even determine who are friendlies and who are enemies. It also lets you comminate with other soldiers through wi-fi or Bluetooth. “Zeroing” the weapon, or setting up and adjusting the sight, is done automatically. ARCAS also tells you if there is a malfunction or jam in the M4. ARCAS will have future updates to the software to improve performance. Through motion detection, ARCAS can track, identify and recognize a target at a maximum of 580 meters, so it is meant for more close-quarters combat.

There Could Be Issues With Such an Advanced System

This all sounds amazing, but there are practical problems.

What if a new private comes to an infantry unit after learning to shoot a certain way with existing sight configurations in Basic Combat Training and Advanced Individual Training? He would have to learn to shoot all over again with a complex system.

It is not clear how much the system weighs and how durable it is. What if sand or dirt gets in ARCAS? Could the entire system crash in combat? What if personnel dropped it on the ground? It seems delicate. Soldiers would then have a rifle that is combat ineffective. Could personnel remove the system and install iron sights in the heat of combat? That’s not clear from the manufacturer. Plus, there are batteries to think about. One of the biggest difficulties with complicated aiming systems is simply remembering to pack extra batteries.

The contractor claims it can shoot around corners without explaining how that would work and that ARCAS allows shooting from the hip with newfound accuracy. Maybe ARCAS has what Silicon Valley calls feature creep. That’s too many features without getting user feedback. It would make more sense to focus on one aspect of the system and then innovate new features as soldiers call for them. This would allow the manufacturer to slowly integrate features after each iteration. This could be done in phases of development.

Aside from these downsides, you have to admit that ARCAS is the future. Heads-up displays, augmented reality, and video cameras are all innovations that will eventually come to rifles. ARCAS just has to slow down and get more feedback from users before the Army fields the weapon.