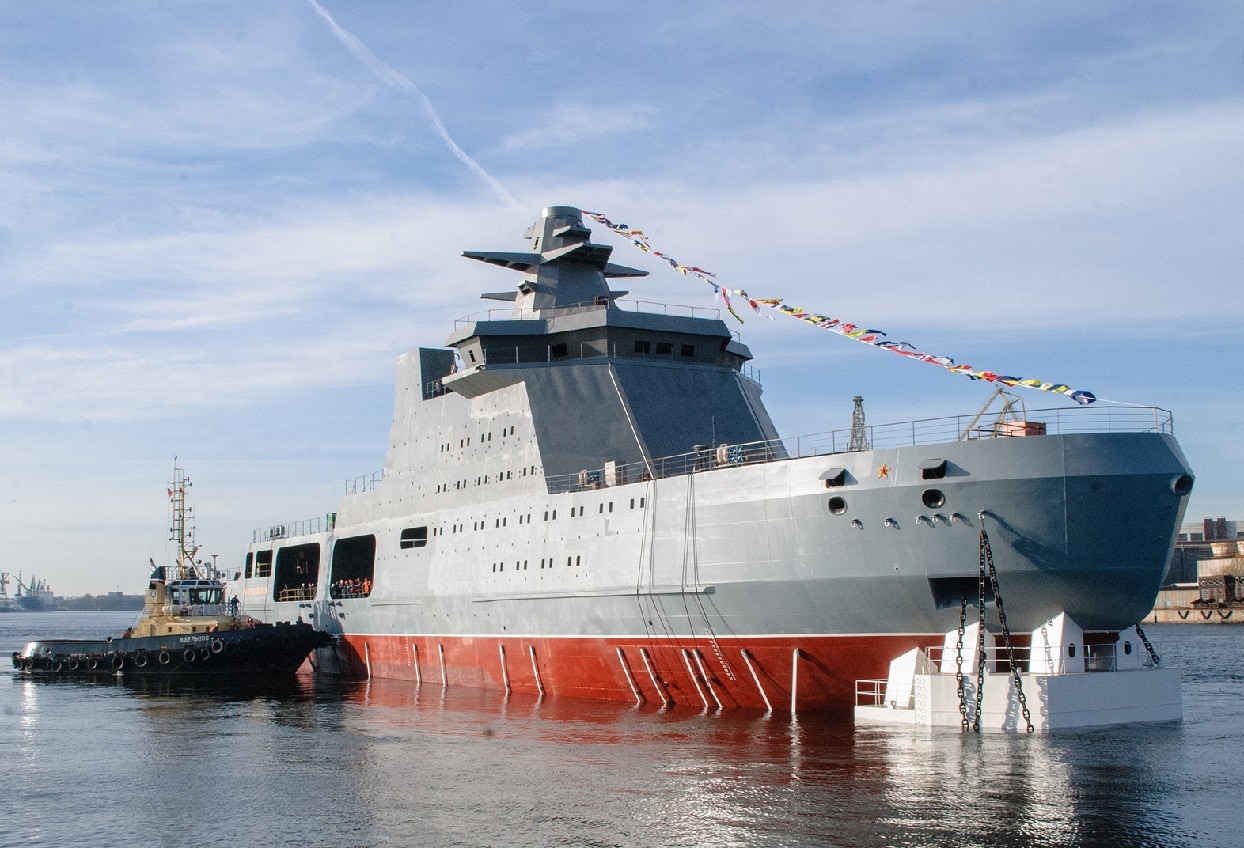 In another sign that the Arctic is becoming a potential battlefield, Russia is arming its new Arctic patrol ships with cruise missiles.

The Ivan Papanin-class vessels can be equipped with Kalibr-K cruise missiles, which generated buzz in 2010 when the weapon’s manufacturer announced that the missile could be transported and launched from shipping containers.

Containerized Kalibrs would give the new patrol ships a considerable punch. “The Ivan Papanin-class Arctic reefer vessel can carry a mobile Kalibr-K missile system,” an official of Yugreftransflot, which is designing the ships, told TASS. “This will require three standard cargo containers that can be delivered to the ship and unloaded ashore by 40-ton shipboard cranes.”

The ships can also unload the Kalibr system on land to create a ground-based missile battery. In that case, a fourth shipping container will serve as the missile crew’s quarters on land.

The 3M14 Kalibr (“club”) – known to NATO as the SS-N-30A — has become the Russian Navy’s standard land-attack cruise missile, sort of a Russian version of the U.S. Tomahawk. Launched by a variety of surface ships and submarines, it can strike ground targets at an estimated range of 1,500 to 2,500 kilometers (932 to 1,553 miles). It is a sea skimmer missile weapon that flies low and subsonic for most of its flight to avoid detection, before climbing to execute a terminal dive on to the target at a speed of faster than Mach 2.

The Ivan Papanin-class vessels are intended to be remarkably multipurpose ships designed to function as icebreakers, tugboats, transports to bring supplies to Arctic bases, refrigerated cargo ships to haul seafood back to Russia, — and warships armed with deadly missiles. They have an armored hull so they can clear a path through ice without the support of a dedicated icebreaker. “The vessel will be able to promptly deliver modules with repair shops, medical and housing blocks, and also groups of specialists to research and military bases in the Arctic,” said TASS. “The reefer ship will focus on delivering seafood from the Far East to European Russia.”

The first ship of the class – the eponymous Ivan Papanin – was launched in 2019 and is scheduled to be commissioned in 2023.

Armed with Kalibr missiles and a 76.2-millimeter gun, the Ivan Papanins will pack a fair bit of firepower for what is essentially an armed transport. How well such a jack-of-all-trades ship can perform each individual mission remains to be seen. In particular, while the Kalibr is a GPS-guided weapon that can hit long-range targets based on targeting data relayed from distant vessels and satellites, the Ivan Papanins will need a reliable datalink system to take full advantage of the Kalibr’s range.

More significant is the additional evidence that Russia is willing to fight over the Arctic, where melting polar ice is creating new shipping routes and revealing mineral riches. Russia has developed anti-aircraft missiles designed for Arctic conditions, as well as ground vehicles to support Moscow’s Arctic build-up, which also includes MiG-31 fighters, bombers and radar. The U.S. and other nations are responding, including the recent deployment of U.S. B-1 bombers to Norway, and American air and naval facilities in Norway.