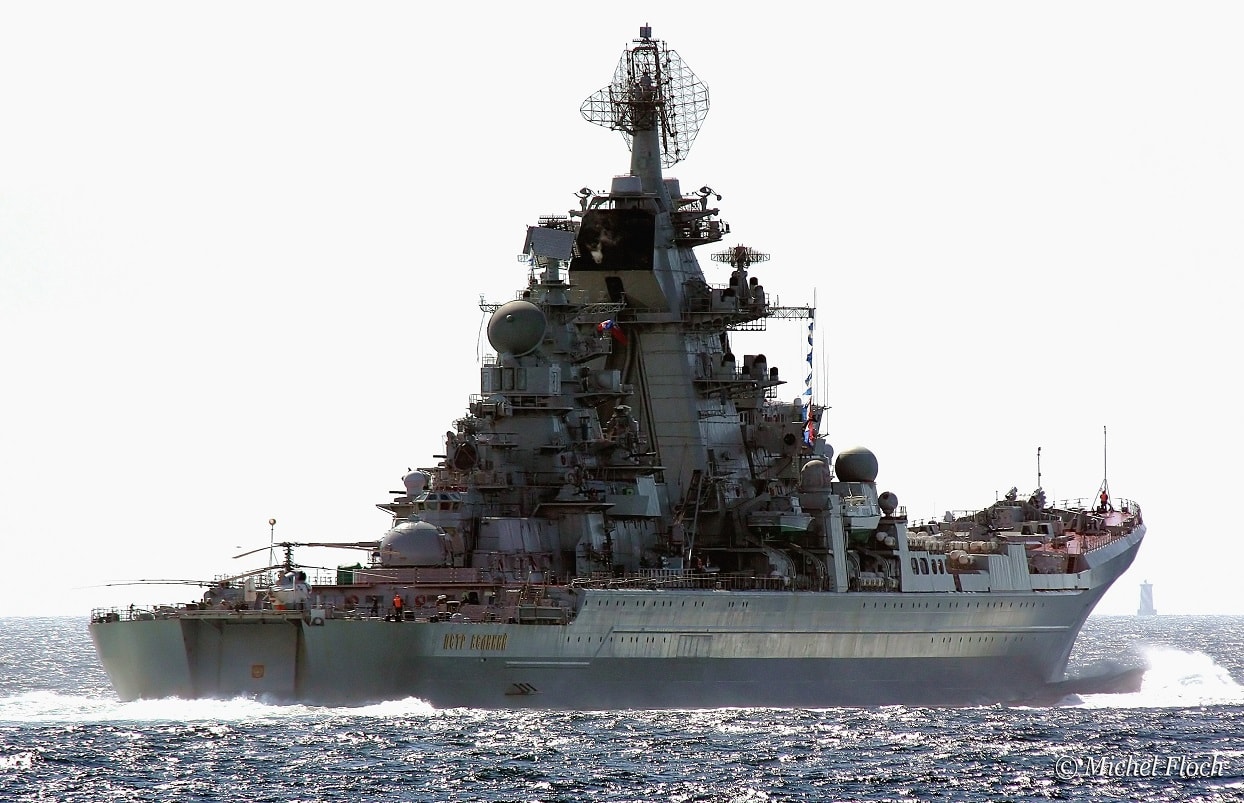 With the possible exception of the aircraft carrier Admiral Kuznetsov, no ships in the Russian navy are as important or held in higher regard than Kirov-class, or Russia’s nuclear battlecruisers.

At 827 feet long and with a displacement of more than 24,000 tons, they are the largest surface combat ships in the world that are not aircraft carriers, and their massive armament of missiles makes them among the most powerful warships ever built.

Arriving in the late stages of the Cold War, the Kirovs were seen as a major threat — so much so that all four of the US Navy’s Iowa-class battleships were reactivated and rearmed in part to deal with them.

The Kirovs were not the first nuclear warships. The US Navy had nine nuclear cruisers and three nuclear-powered aircraft carriers in service by the time the first battlecruiser, Kirov, was commissioned into the Soviet navy in 1980.

But their sheer size and massive armament set them apart from their nuclear and conventional US counterparts. They were so large that Western observers designated them “battlecruisers,” the first ships to receive that designation since World War II.

Five of the ships were planned but only four were built. Three of them, Kirov, Frunze, and Kalinin, entered service before the breakup of the Soviet Union, after which they were renamed Admiral Ushakov, Admiral Lazarev, and Admiral Nakhimov, respectively.

The fourth ship, Pyotr Velikiy (Russian for “Peter the Great”), was commissioned in 1998, almost a decade after its launch.

The Soviets designated them “heavy nuclear-powered guided-missile cruisers,” and like most of the Soviet fleet, they were intended to counter the threat of US Navy carrier groups and nuclear submarines, the biggest priorities for the Soviet navy in the event of war.

Because they had nuclear propulsion, their range was limited only by mechanical problems, food supplies, and crew comfort. That extended range allowed them to pose a greater threat to carriers than other surface ships in the fleet.

Armed to the teeth

While American supercarriers are larger, no other warship is as well armed as the Kirovs.

The primary armament is 20 P-700 supersonic anti-ship missiles, each of them carrying a 1,600-pound high-explosive warhead. They could also carry low-yield nuclear warheads.

Each Kortik has two 30 mm Gatling guns capable of firing more than 4,000 rounds a minute and eight 9M311 anti-aircraft missiles, with an additional 144 9M311s in storage.

There are slight variations among the four ships. Admiral Ushakov, for instance, had two single-barreled AK-100 100 mm guns and a twin SS-N-14 Silex anti-submarine missile launcher. Even with their differences, they were still considered some of the most heavily armed vessels on the seas.

President Ronald Reagan, elected the same year Kirov was commissioned, worried about the increased Soviet naval power and pledged to bring the total number of US Navy vessels to 600.

Part of the plan involved reactivating all four Iowa-class battleships and arming them with Harpoon and Tomahawk missiles, as well as Phalanx close-in weapons system.

The first three Kirovs were commissioned in 1980, 1984, and 1988. Although they saw limited service with the Soviet navy’s Pacific and northern fleets, they were a source of anxiety for NATO naval commanders.

After the Soviet Union collapsed, Russia could not afford to keep all the battlecruisers operational.

Admiral Ushakov was taken out of service in 1990 after an accident with its reactor, and Admiral Lazarev was permanently docked in 1999. Both are set to be scrapped this year.

Admiral Nakhimov was commissioned in 1988 but was rarely deployed after the dissolution of the Soviet Union, and in 1997 it entered the Sevmash shipyard in Severodvinsk for upgrades.

As the newest battlecruiser, Pyotr Velikiy is more modern and is the only vessel of the class in active service.

As the flagship of Russia’s Northern Fleet, Pyotr Velikiy has operated in Europe, South America, Asia, and Africa. In 2009, it captured 10 pirates off the coast of Somalia in what is perhaps the most uneven match in naval history.

Despite the Kirovs’ fall from grace, the Russian navy is attempting to revive their glory days with a complete refit of Admiral Nakhimov, which began in earnest in 2014. The battlecruiser will receive new weapons, radars, and other electronics.

The specifics of Nakhimov’s new arsenal are not known, but the 3M22 Zircon hypersonic missile, reportedly capable of reaching speeds up to Mach 9, is expected to be a large part of it. Smaller than a P-700, Admiral Nakhimov could be able to carry as many as 60 Zircons.

Weapons that will be included after the refit are the Fort-M surface-to-air missile system, the Pantsir-M CIWS, and the Paket-NK and Otvet anti-submarine missiles.