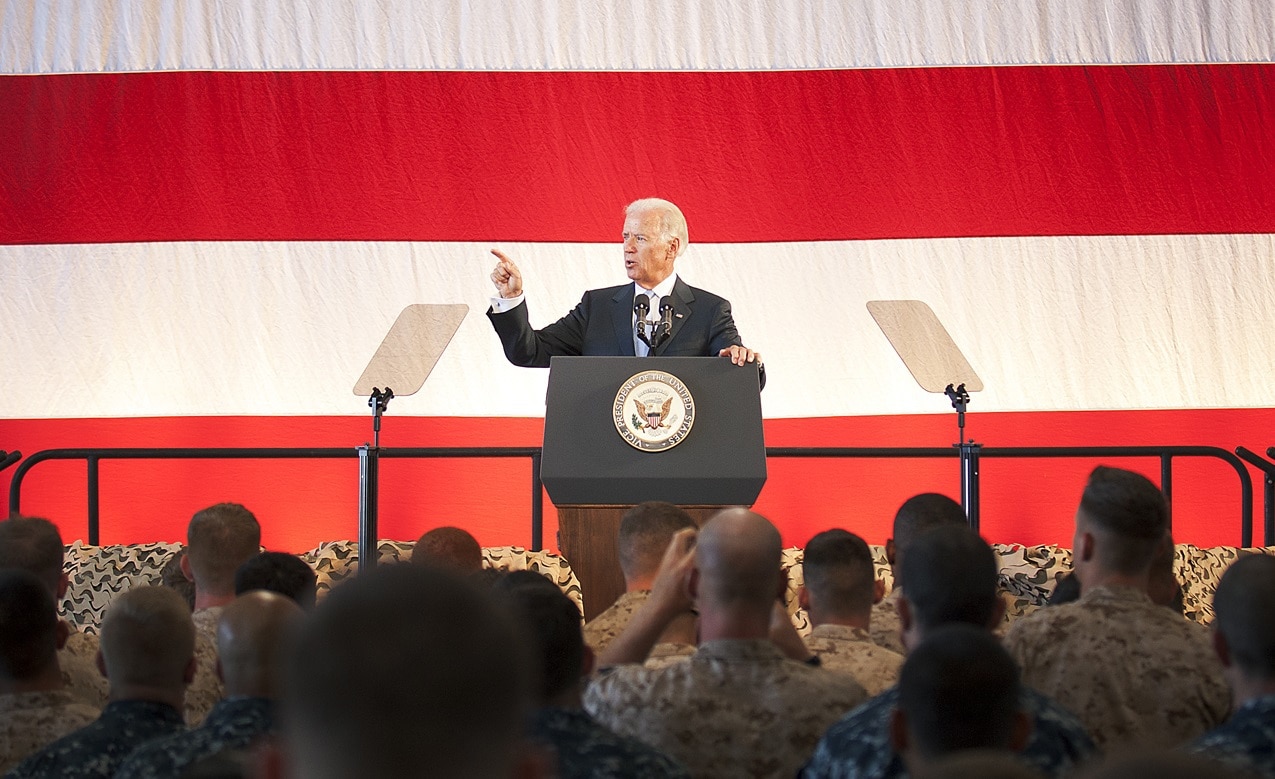 Marine Corps Base Kaneohe Bay, Hawaii -- U.S. Vice President Joe Biden speaks to Marines, sailors and their families at Hangar 105 here Thursday. More than 1,000 spectators gathered to hear BidenÕs address. ÒI wish everyoneÕs wives, sons and daughters were here, because America owes them,Ó Biden said. ÒIn all of history, no generation of families has had to deal with repeated deployments such as you have.Ó After his remarks to the troops, Biden took time after to shake hands and pose for photographs with each person who came forward to meet him. The vice president stopped in Hawaii after a nine-day trip to Asia where he met with key leaders there to discuss bilateral, regional and international issues, according to the White House. During his one-and-a-half day stay here, Biden visited children at the new base Youth Center and played golf at the Klipper Golf Course.

What does it mean to say that the United States suffers from an “Imperial Presidency Problem?” For at least the last fifty years, it has defined a line of critique of the Presidential power to make war without the consent of Congress.

The vast expansion of the standing military establishment in World War II meant that post-war Presidents had the means to wage war at the times and places of their choosing. The development of nuclear weapons meant that Presidents needed the authority to make decisions of war and peace immediately, without the advice and consent of Congress. To be sure, there is a long history of Presidents waging wars without Congressional intervention, but the advent of the Cold War raised the stakes immensely. In 1950, President Truman’s decision to intervene in the civil war on the Korean Peninsula seemed a harbinger of a vast expansion of Presidential power over war and peace.

The problem was seen as so serious at near the end of the Vietnam War that Congress passed the War Powers Resolution in 1973 in an effort to limit Presidential prerogative with respect to warmaking. Congressional critics of Presidential warmaking power have continued their efforts to restrain imperial Presidents down to the present day; a bipartisan coalition of lawmakers attempted to constrain President Trump’s support for the Saudi war in Yemen, albeit with little success. More recently, Senators Bernie Sanders, Mike Lee, and Chris Murphy proposed a sweeping overhaul of the national security prerogatives of the President that would significantly expand upon and clarify the War Powers Resolution.

But what if the Imperial Presidency is, at least partially, a myth?

Patrick Hulme, a Ph.D. candidate in political science at the University of California at San Diego, has work circulating about the importance of the precedent of the Korean War in Presidential thinking. As Hulme argues, “Truman’s successors took a specific lesson away from the Korean War: by failing to have members of Congress publicly commit to armed intervention via a formal vote ex ante, they left themselves vulnerable to highly damaging congressional action ex-post if the use of force did not end in victory.” Presidents don’t seek Congressional approval for every mission, but for interventions that may last a long time or have the potential to go badly, they want Congress on board.

We can see this with respect to President Obama’s decision not to strike Syria in 2013.  Obama’s initial instinct, testified to by many with access to the deliberations, was to launch an attack on Syria as soon as possible. At the same time, it seems that Obama became less certain that US involvement could be limited to a few airstrikes.  The Syrian government was weak but in no danger of imminent collapse, and Obama worried that initial strikes would require a follow-up if Assad continued to use chemical weapons. This makes sense in the context of Hulme’s model; a President who may be entirely willing to conduct a quick, one-off strike without Congressional approval will find it altogether less pleasant to launch a long-term military operation without bringing Congress on board.

The real danger would be for a President to decide upon war without consulting Congress and then earn public adulation for acting effectively as a lawless warlord, or assume that Congress will eventually be forced to support them. Presidents do not launch wars in anticipation that they will become more popular over time. The more engagement the conflict requires, the more a President wants to begin the war with clear Congressional support. In this sense, Congress provides the President with a degree of protection against critics in case a military operation goes bad.

The belief that launching and waging a war independently of Congress would result in popularity would be truly dangerous to both America and the world.  Fortunately, Presidents don’t tend to act in this way. Rather, they see unilateral war, especially when the chance of a prolonged engagement is high, as too politically risky. Even when Presidents claim that they do not need Congressional authority to launch a war, they seek such authority because they want political protection. And in truth it is unclear that Congressional approval did much to protect Johnson from the verdict of Vietnam or George W. Bush from the verdict of Iraq; both Presidents bore the brunt of public criticism for the decision to go to war, notwithstanding the approval of Congress.

Thus, the problem is less that the “imperial” President launches wars without the authorization of Congress. The problem is that Congress has displayed all-too-much willingness to go along with even the worst wars that a President seeks to undertake. None of this means that reforming Presidential warmaking powers isn’t a good idea. In particular, giving Congress more control over presidential power at low levels of escalation (arms sales, for example) clearly seems to be a good idea. Moreover, we should not underestimate the ability of a President to control the public discourse, and especially to control the flow of intelligence. Both the Vietnam War and the Iraq War were launched with a faulty intelligence frame; the executive characterized and distorted existing intelligence to paint a picture favorable to war. But as always, resolving the problem requires careful analysis of the extent of the problem.

In this article:Imperial Presidency, US History, US Military, Vietnam War, War Powers