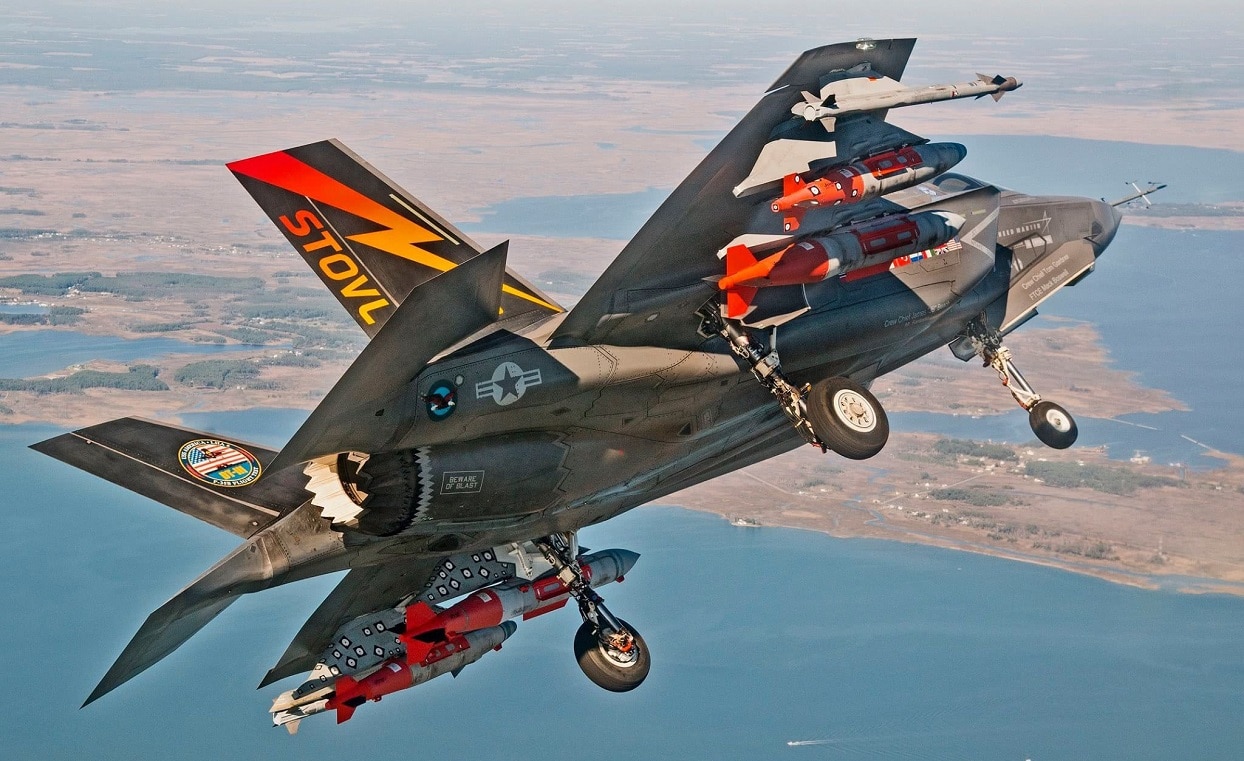 You probably think the F-35 Joint Strike Fighter is just for intercepting enemy warplanes and dog-fighting. It does have these valuable attributes for sure. But it’s also a multi-role fighter and can be used to bomb the daylights out of moving targets and saturate the ground with air-to-surface missiles.

This capability is known as “beast mode” and this status has weapons stored internally plus thousands of pounds of extra ordnance on its wing mounts.

Above you can see how the F-35 in beast mode can flatten targets in a breathtaking manner, but first some background on the airplane and what it means to ratchet up the fighter into ground war blitzkrieg status.

What Is Beast Mode Compared to Stealth Mode?

Normally the Joint Strike Fighter carries 5,700 pounds of internal missiles and bombs inside the weapons bays for maximum stealth.

So, in basic radar-evading mode on an air-to-air mission, we are talking a load of four AIM-120 AMRAAM Advanced Medium-Range Air-to-Air Missiles.

Next, we have the default mode of targeting air-to-surface targets with maximum radar-evasion. This normal loadout is two AMRAAMs and two 2,000-pound Joint Direct Attack Munition (JDAM) precision-guided bombs with Mk-84 warheads.

This Video Will Get You Excited

So, now that you are armed with this information, check out the video above.

It shows an F-35 in air-to-ground beast mode for a test bombing run on surface targets that really get you in the combat spirit. Especially when you watch a moving truck get pulverized.

It’s difficult to tell which bombs are used in the video, but it looks like they are Paveway IV 500-pound laser-guided bombs. The video is from November 2018, so it shows that beast mode has been in vogue for the last three years.

The idea behind beast mode is that it reigns supreme during the latter stages of air combat – when the enemy radar systems and intercepting fighters are degraded enough where stealth attributes are less important. This war status is known as a “Day 3” activity. Day One and Two clear the way for Day Three beast mode.

A notable observation is that allied air forces from the Netherlands, Italy, and Australia are switching over to beast mode with their F-35s when needed. This is exactly what was envisioned for the Joint Strike Fighter. Allied nations would take their own initiative when readying for aerial combat and discover that the F-35 is clearly a multi-role fighter that will enable dogfighting and bombing roles in a potential conflict with Russia or China.