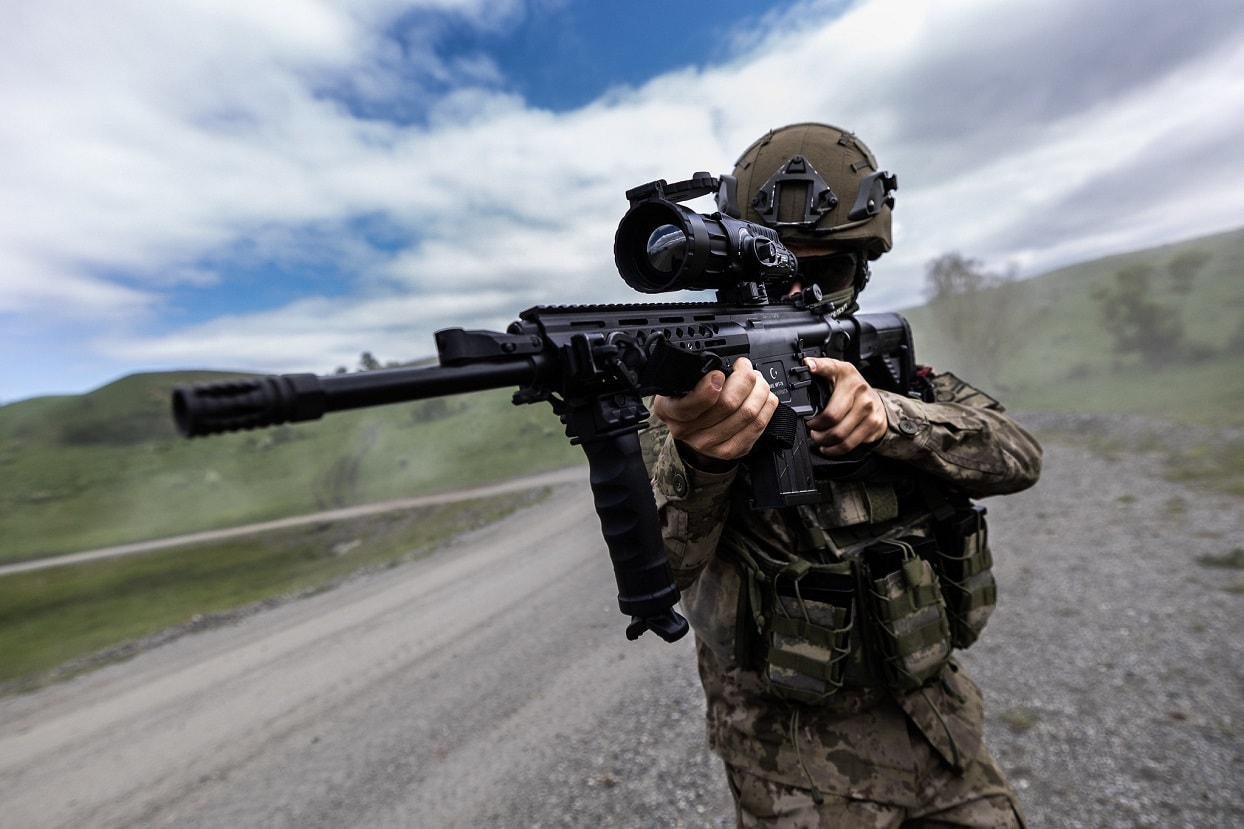 A Turkish soldier uses thermal optics to scan his surroundings during a training patrol held as part of exercise Steadfast Defender 2021. Steadfast Defender 2021 is a NATO-led exercise involving over 9,000 troops from more than 20 NATO Allies and partners. The objective is to ensure that NATO forces are trained, able to operate together and ready to respond to any threat from any direction.

Are the United States and NATO headed to war with Russia over Ukraine? Regardless of what Moscow does or doesn’t do, if Washington and Brussels base their policies on realistic, logical factors, the answer will be no, and Western security will be assured. If decisions are based on emotion and hubris, however, war is very much a possibility.

On Wednesday U.S. Secretary of State Antony Blinken warned in unusually stark terms of a possible invasion of Ukraine by Russia which, he said, would be a “serious mistake.” On Thursday, Dmitry Polyansky, Russia’s deputy U.N. Ambassador, shot back that Moscow had never contemplated an invasion of Ukraine and never would unless provoked by Ukraine – “or by somebody else.”

Before this war of words escalates to an actual shooting war, Washington, Moscow, and Brussels need to deescalate tensions and cool the rhetoric.

A military clash over Ukraine would harm the interests of all parties – and in a worst-case scenario – spiral out of control into a catastrophic nuclear exchange.

America and NATO vs. Russia in Ukraine: A Short History

This tense situation on the ground on both sides of the border of Ukraine has been building for quite some time.

The starting point for the current tense situation began in April 2008 when NATO formally accepted Ukraine and Georgia into its membership action plan, which promised eventual membership to both countries, bringing the NATO alliance directly to the borders of Russia. Two months earlier, Putin had warned that Russia “would have to target its offensive rocket systems at Ukraine” if Kiev joined NATO.

One week after the NATO announcement, the Chief of Staff of the Russian Armed Forces, Gen. Yuri Baluyevsky, ominously warned that if Ukraine or Georgia joined NATO, “Russia will take [military] steps aimed at ensuring its interests along its borders.” Less than four months later Russia made good on the threat and invaded parts of Georgia, later annexing the provinces of South Ossetia and Abkhazia.

in February 2014  Ukrainian protesters ousted Moscow-friendly leader Viktor Yanukovych because he rejected closer integration with the European Union. Russia backed the Yanukovych government; the West backed the protestors. Taking advantage of the chaos – as he had done six years earlier in Georgia – Putin seized control of and later annexed Crimea – legally a part of Ukraine.

One month later, ethnic Russians backed by the Kremlin in southeastern Ukraine rebelled against their government and declared independence from Ukraine, which sparked a separatist war that remains on a slow burn. In response to President Obama’s overt statements of support for Ukraine, Deputy Foreign Minister for Russia Vladimir Titov said that any further expansion of NATO toward Russia’s border would be considered a “demonstration of hostile intentions.” Things simmered on a low boil until June of this year.

In the final communique issued at the end of the 2021 NATO summit, alliance leaders reiterated that as previous statements had indicated, “Ukraine will become a member of the Alliance with the Membership Action Plan.” Days later, as they had done in 2008, the Kremlin warned that Ukrainian entry into NATO was a “red line” that would result in unspecified actions.

Ignoring Moscow, Brussels announced in August that in response “to the Russia-Ukraine conflict, NATO has reinforced its support for capability development and capacity-building in Ukraine.” In response, Putin again said any moves to build capacity in Ukraine would be a “red line.”  Earlier in 2021 Russia had massed over 100,000 troops near the Ukraine border but did little more than posture. Now, following NATO’s capacity-building plans, Russia is again building up troops opposite Ukraine towards an unknown purpose.

Without any question, it is in America’s interest for any sovereign nation, anywhere in the world, to remain free and democratic. Washington wants Kiev to remain free of Russian pressure, military or otherwise.

But preferences alone are not enough to build policies. Cold, hard reality must form our strategy. In considering how far the U.S. should go in support of Ukraine must be founded on an accurate assessment of how we can best secure America’s interests.

Central to that calculation must be the overriding imperative that our primary objectives must be avoiding unnecessary war with Russia and the preservation of peace in Europe.

Whether we like it or not, Moscow considers having a NATO military member on its border as an existential threat and evidence suggests they are willing to go to war to prevent it.

The cold, hard fact is that Ukraine is not a member of NATO and thus does not have Article 5 security guarantees. We should not extend such guarantees.

Today, Russian combat troops are in or near both Georgia and Ukraine. Putin has demonstrated he is willing to fight to preserve his borders. Our compelling obligations are to preserve peace in Europe for our treaty allies, and forcing NATO membership for Ukraine is likely to undermine that objective, not make Europe safer.

If the U.S. and NATO push too hard in militarily supporting Ukraine, the chances for war will continue to increase. If we instead encourage Kiev to make whatever accommodation it must with Moscow – while maintaining our Article 5 obligations to current NATO treaty partners – then there will be no war. If we ignore reality and push on trying to attain our preferred outcome, the chances of war with Russia increase to dangerous levels.