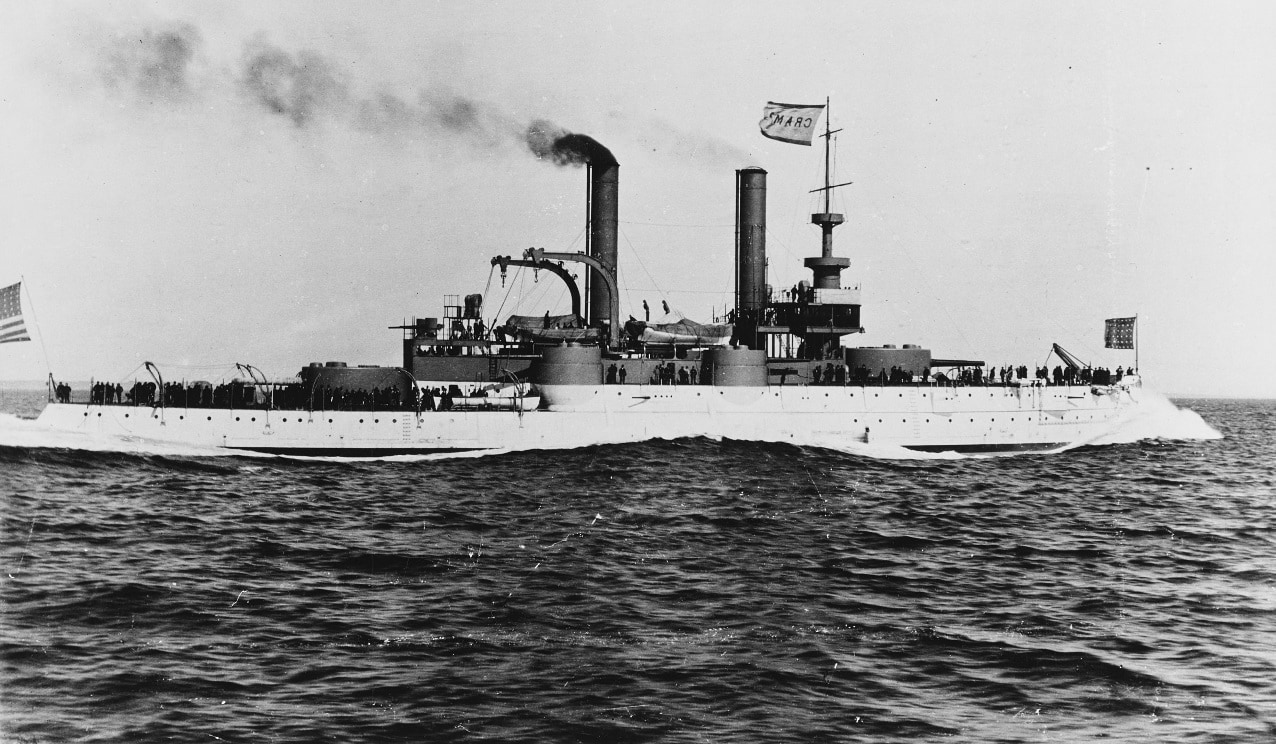 The U.S. Navy’s four Iowa-class battleships were among the largest and most powerful vessels built during the Second World War, and each played a crucial role in the conflict and throughout the Cold War. Yet, the lead vessel of that class was not the first battleship to bear the name for the Hawkeye State.

Officially classified as a “Seagoing Coastline Battleship,” USS Iowa (BB-4) was seen as a marked improvement over the previous Indiana-class battleships, as previous ships in the class weren’t capable of crossing the open ocean. Yet, she wasn’t a full-fledged “first class” battleship equal to those in service with the Royal Navy or other European nations.

The 11,410-ton battleship was built in Philadelphia, Pennsylvania and commissioned just a year before the outbreak of the Spanish-American War. She was protected with 14-inches of armor, and was only reasonably armed for the era with just four 12-inch guns, eight 8-inch guns, six 4-inch guns, twenty-two 6-pounder rapid fire guns, four 1-pounder guns, four M1895 Colt machine guns and eight 14-inch torpedo tubes. Yet, compared to her future adversary, the Iowa would prove more than capable.

With a full crew, BB-4 carried 471 officers, sailors and marines.

Service in War And Beyond

When the war broke out, she participated in the shelling of San Juan, Puerto Rico, before being ordered to join the “Flying Squadron” under the command of Commodore Winfield Scott Schley and took part in the blockade duty off Santiago de Cuba. USS Iowa was also the first U.S. Navy warship to sight Admiral Pascual Cevera’s fleet coming out of the channel on July 3, 1898 – and became the first U.S. vessel to open fire in the Battle of Santiago. During the 20-minute engagement with the Spanish Navy cruisers Maria Teresa, flagship of the fleet, and Oquendo, the effective fire from BB-4 successfully set both enemy warships aflame and drove them on the beach.

USS Iowa then joined with USS Indiana and USS Glouchester in destroying the Spanish torpedo boat destroyers Pluton and Furor, before turning her attention to the cruiser Vizcaya, which she successfully pursued until the Spanish warship was run aground and surrendered. After the battle, BB-4 received on many a number of Spanish prisoners, among them Admiral Cervera.

After the war, USS Iowa first traveled to New York before being transferred to the West Coast, which required a journey around Cape Horn. She served with the Pacific Squadron before being briefly decommissioned in 1903. After undergoing an overhaul, she was recommissioned and served primarily in the training service, including taking Naval Academy Midshipmen to European Wars. She was brought out of retirement a final time after America’s entry into the First World War, where she served as a Receiving Ship at the Philadelphia Navy Yard and then as a training and guard ship at Chesapeake Bay.

After the First World War, she was renamed Coast Battleship No. 4, and was the first radio controlled target ship to be employed in a fleet exercise. She was sunk on March 23, 1923 in Panama Bay after receiving fire from the battleship USS Mississippi (BB-41).

There had been plans for the name Iowa to be used with BB-53, on the canceled 1920 South Dakota-class – not to be confused with the later class of battleships built in the late 1930s – but along with the other five vessels, she was sold for scrap before work was completed. It wouldn’t be until February 1943 that the next USS Iowa (BB-61) would enter service.

However, even as the latter warship has overshadowed the original battleship Iowa, both of the U.S. Navy battle wagons to bear the name for the Hawkeye State had notable careers and proved themselves in combat.