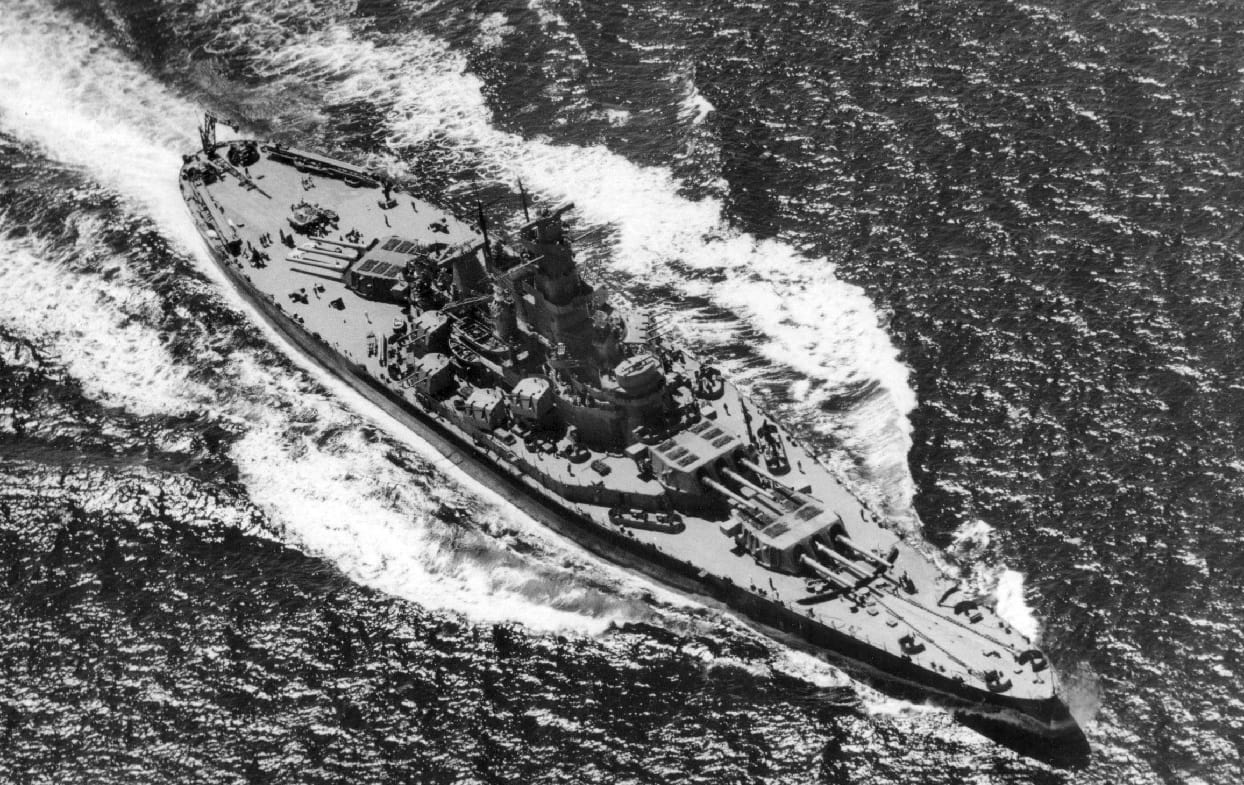 USS South Dakota, A Quick Battleship History: During the First World War, the U.S. Navy began to move forward with a new class of battleships. Designed to be the “ultimate dreadnoughts” with “all-or-nothing” protection, the planned South Dakota-class fell victim not to a rival power but to the Washington Naval Treaty of 1922. All six of the planned warships were canceled when the vessels were already between 11 percent and 38 percent complete.

Yet, just a generation later, with the clouds of war on the horizon and the Washington Naval Treaty and subsequent London Naval Treaties dead in the water, the U.S. Navy moved forward with a new class of fast battleships – also to be named for the Mount Rushmore State. While they were designed to the same treaty standard displacement limit of 35,000 long tons (35,600 tons) as the preceding North Carolina-class, and even had the same main battery of nine 16-inch/45 caliber Mark 6 guns in three-gun turrets, the new South Dakota-class battle wagons were more compact and far better protected. Naval historians have often dubbed the new class of warships to be the “best treaty battleships” ever built.

The first two ships of the class were formally ordered on April 4, 1938, while an additional pair of battleships was subsequently added two months later under the Deficiency Authorization that was passed due to increasing international tensions. The “escalator clause” of the Second London Naval Treaty had been already been invoked, and that had allowed the new design to mount the 16-inch guns. Yet, Congress still specified that the vessels had to stay within the 35,000-ton limit set by the earlier Washington Naval Treaty.

The most apparent difference from the North Carolina-class was a slightly reduced hull – shortened by some 60 feet), which allowed for improved horizontal and underwater protection. Additionally, where the North Carolina battleships had twin funnels, the South Dakota-class were fitted with a single funnel, faired into the after part of the bridge.

The warships were thus well armored and armed. All four South Dakota-class battleships saw wide service during the Second World War, but their careers were cut short when the war ended. Each was decommissioned, and while there were various schemes outlined to update or convert the warships to new uses in the early 1960s nothing came of it. USS South Dakota (BB-57) and USS Indiana (BB-58) were sold and scrapped, but USS Massachusetts (BB-59) and USS Alabama (BB-60) were each preserved as museum ships in their name states – and they continue to honor the veterans who served on them, and to remind the world that this was truly the best class of treaty battleships ever to sail the world’s oceans.