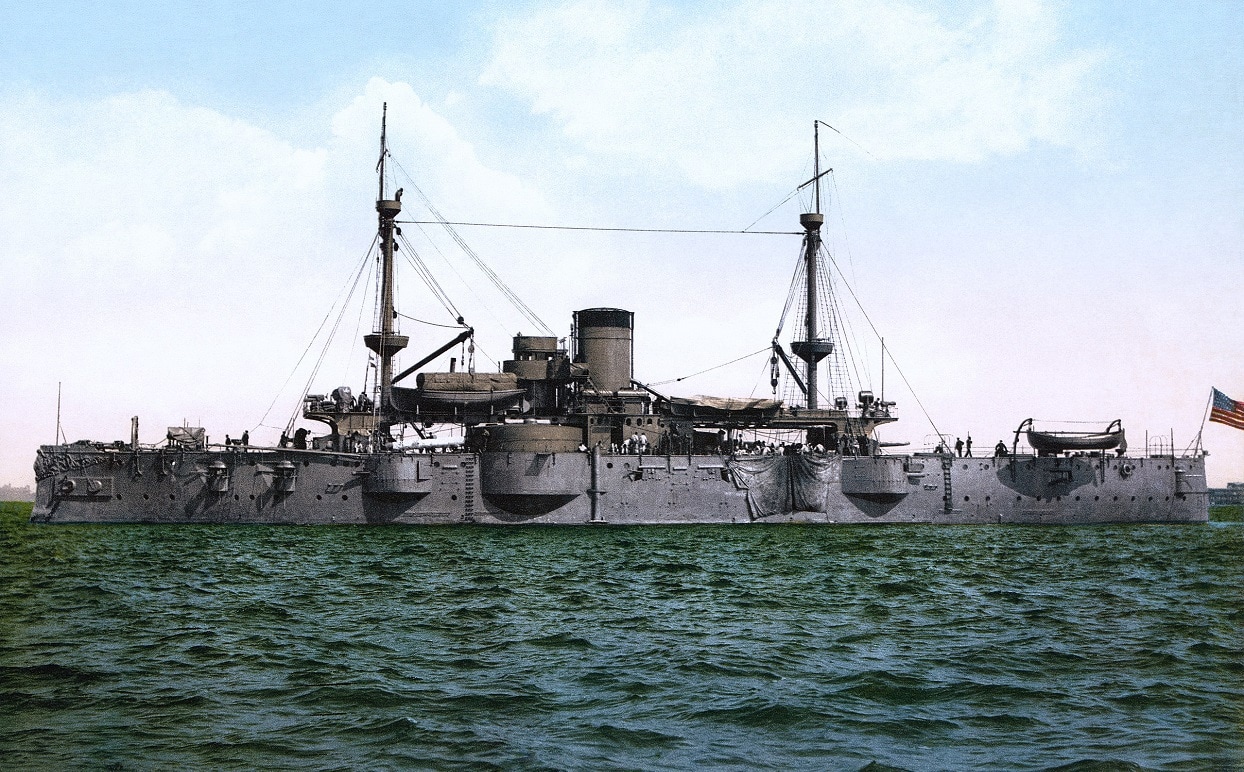 The USS Texas (BB-35), completed in 1914, remains the only battleship in existence to have seen service in both World Wars. She is has been preserved as a naval museum ship, the first such permanent battleship memorial in the United States. However, she is actually the second “battleship” to bear the name Texas.

While the USS Indiana (BB-1) has the notable distinction of being the first designated U.S. Navy battleship, there was actually the USS Texas, a pre-dreadnought battleship that was commissioned nearly a decade earlier. She was built in reaction to the acquisition of modern armored warships by several South American nations, and USS Texas incorporated many of the latest developments seen in naval design of the 1890s.

Authorized by the U.S. Congress on August 3, 1886, USS Texas was built at the U.S. Navy yards at Norfolk, Virginia using English plans that were developed as part of a design competition. By the time of her completion in 1895 she was already outdated. That included the mounting of the main armament “en echelon” to allow maximum end-on fire. She was armed with two 12-inch guns, six 6-inch guns, twelve 6-pounders and six 1-pounders, as well as four 37mm Hotchkiss guns and two Colt M1985 machine guns.

She was the only U.S. Navy “battleship” to have two military masts, and at 308 feet, 10 inches she was small by today’s standards. USS Texas displaced just 6,315 tons – while her crew complement consisted of 30 officers and 359 enlisted men.

Commissioned a month earlier than the USS Maine, USS Texas was the first bona fide United States battleship – and both warships were meant to represent advances in U.S. Naval power. However, instead of being a testament to U.S. industry, the warship actually served to highlight the lack of capabilities the nation had had the time. Her construction was lengthy and plagued by several mishaps.

Even after her completion, she was considered an “unlucky” warship due to several accidents early in her career, yet the warship proved herself during the Spanish-American War, when she was assigned to the “Flying Squadron” and arrived off the coast of Cuba on February 21, 1898. She took part in patrols and blockading duty, and on May 21, 1898 along with USS Marblehead bombarded the Spanish fortress of Cay del Tore in Guantanamo Boy. In just over an hour, the ships destroyed the fortress.

On July 3, 1898, USS Texas took part in the Battle of Santiago, successfully engaging four of the enemy ships. Her main battery pounded the Spanish armored cruisers Vizcaya and Colon, while the secondary batteries joined USS Iowa and USS Gloucester in battery two torpedo-boat destroyers. While the engagement at Santiago has largely been overshadowed by the Battle of Manila Bay in the Pacific, the action in Cuba was nearly as devastating. By the end of the day, the Spanish fleet had been completely annihilated, and America’s first battleship had been there. Two weeks after the great naval victory, Santiago de Cuba fell and a day later Santiago surrendered.

After being briefly decommissioned in 1901 for repairs, the warship was recommissioned at the end of 1902, and served as the flagship of the “Coast Squadron” until 1905. She became a station ship at Charleston, South Carolina, and on February 15, 1911 she was renamed USS San Marcos, so that the Lone Star State could be honored with the new battleship BB-35.

The old USS Texas/USS San Marcos was struck from the Navy rolls on October 10, 1911. She was subsequently sunk as a target in Tangier Sound in the Chesapeake Bay, the first battleship to be used as such a target.