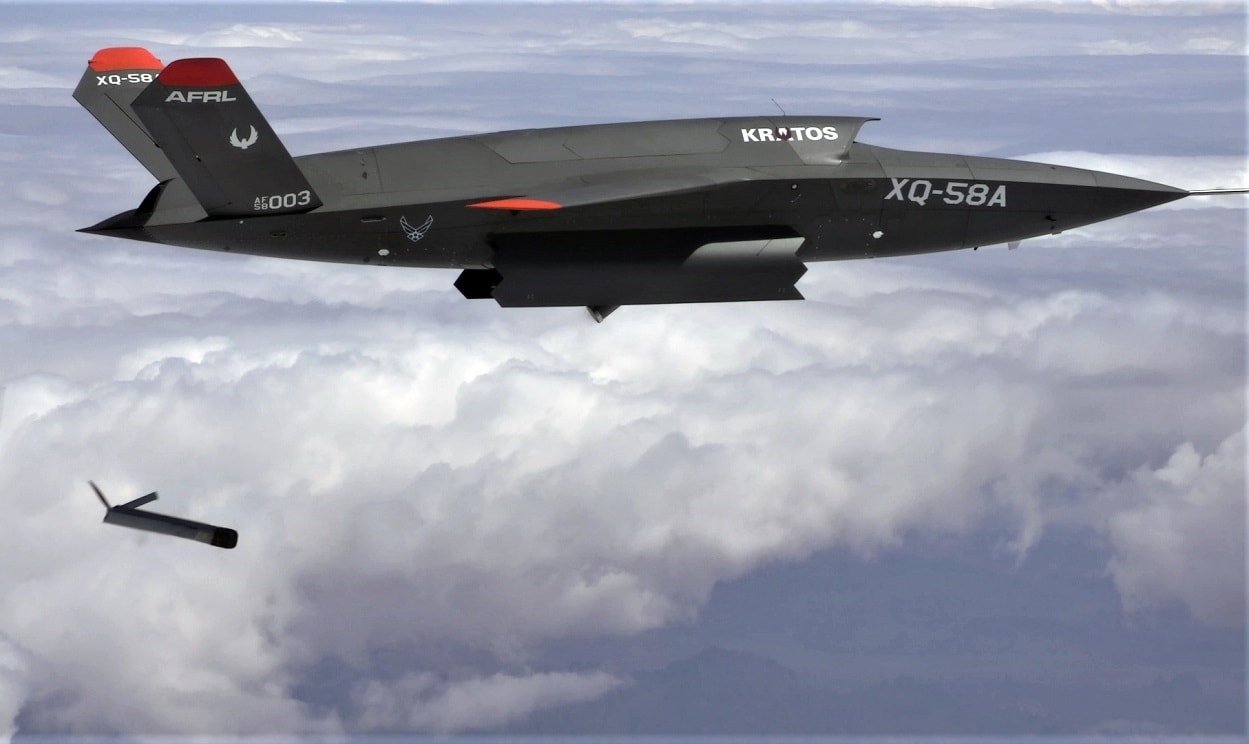 The XQ-58A Valkyrie demonstrates the separation of the ALTIUS-600 small unmanned aircraft system in a test at the U.S. Army Yuma Proving Ground test range, Ariz., March 26, 2021. The test was the first time the weapons bay doors have been opened in flight. (U.S. Air Force courtesy photo)

How about when fighter pilots get a new wingman that is unmanned? That is where the XQ-58A Valkyrie comes in.

The Valkyrie is the Air Force’s unmanned combat air project that incorporates artificial intelligence. The Valkyrie has an internal brain called “Skyborg,” which controls the drone and helps manned fighter-bombers do their job more effectively and efficiently.

Skyborg Brain Is the Key

Breaking Defense describes Skyborg as an artificial brain that will “provide data, such as telemetry, flight plans and weather, that a manned wingman’s aircraft normally would provide.” The Valkyrie, paired with the “loyal wingman” teaming architecture of the Skyborg program, can sometimes fly out ahead of the formation and can track enemy targets for its manned wingmen. This allows safer stand-off missile launches and bombing from its manned brethren.

If It’s Shot Down That’s Okay

The Valkyrie, part of the Air Force Research Lab’s Low Cost Attritable Aircraft Technology (LCAAT) portfolio, is a stealthy aircraft and hard to track on radar. But it is expendable if shot down and this lessens the chance that a live pilot gets taken prisoner after ejecting.

It is also less expensive than a $80 million manned fighter.

The low maintenance drone is launched from a shipping container which makes the launcher highly mobile. This container launch means that the Valkyrie does not need a runway, so one could imagine all the possibilities for deployment on a battlefield because existing military trucks can carry it from one location to another. The Valkyrie is then recovered by parachute, again not needing a runway. Maximum speed is 652 miles per hour.

It can carry four Joint Direct Attack Munitions bombs internally and the aircraft has a range of at least 2,000 miles.

The Valkyrie is the fruit of a faster acquisition process – only 2.5 years from when the contract was awarded to prototype and test flight. Originally a $37.7 million contract, the first flight was in Spring 2019, and by 2020 it had flown on four tests. Defense contractor Kratos Defense & Security Solutions wants production units to be delivered to the Air Force this year.

Regard the role of the Valkyrie as a parent and a child concept. The parent is an F-22 or F-35 and the child is controlled by pilots and the Skyborg system. It can feed targeting data and conduct intelligence, surveillance, and reconnaissance roles or drop bombs. The other role that could suit the Valkyrie is bomb damage assessment and sending that data to command-and-control aircraft or directly to its manned wingmen.

The Future Is Now

The loyal wingman concept is a good one and Russia has plans for its own concept with the S-70 Okhotnik-B drone flying with the fifth generation Su-57. So, it makes sense that the U.S. Air Force has its own loyal wingman model.

The real test is to see how well the Cyborg artificial intelligence system can be integrated and “talk” to American stealth warplanes. Skyborg carries its own antenna radio system to accomplish this type of communication. Will F-35 and F-22 pilots be able to fly their own airplane and control the loyal wingman at the same time? They’ll figure that out in training, meanwhile, the Valkyrie will concentrate on more test flights and integration to make the loyal wingman concept a reality.