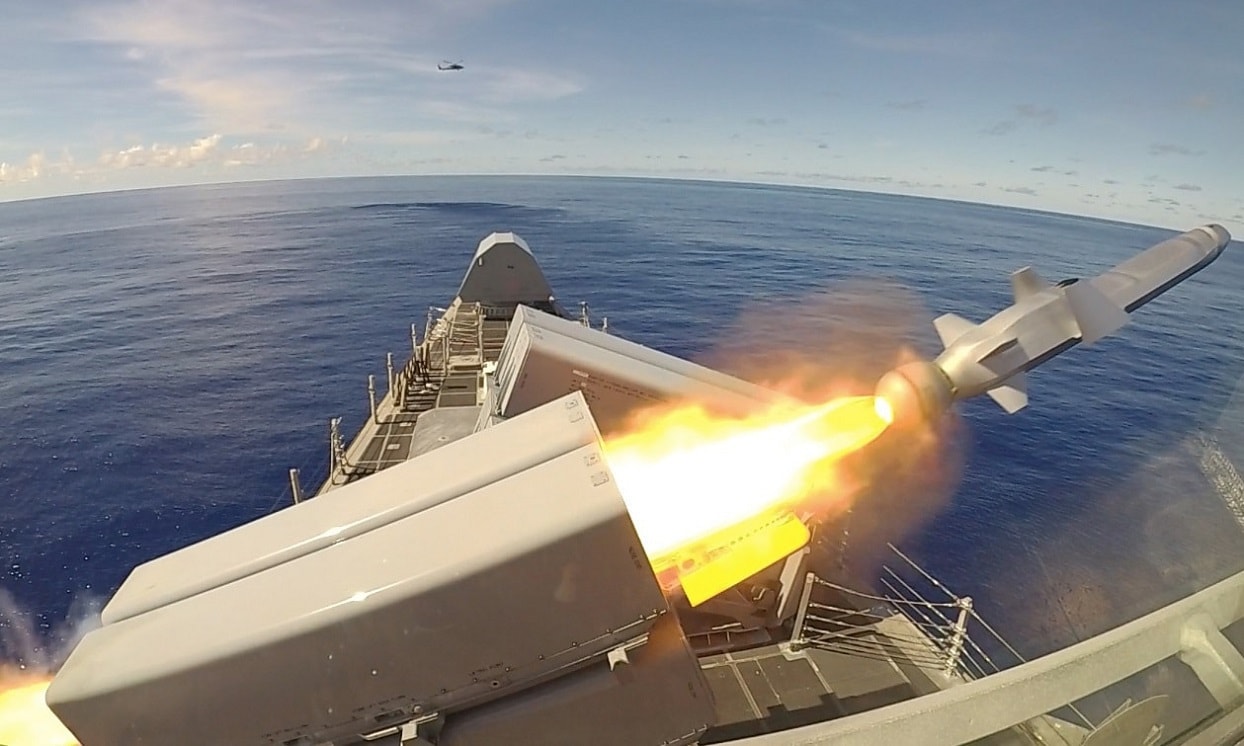 Talk about long-range precision strikes. China better take notice. The Naval Strike Missile has a deadly 500-pound warhead and can deliver a wallop out past 100 nautical miles. It skims over the sea and conducts evasive maneuvers to eliminate enemy shipping. Originally designed to be launched from sea, the Marine Corps is also firing it from unmanned mobile launchers on land. It flies up and down depending on the terrain, then barrels into its targets.

The Naval Strike Missile (NSM) is a joint venture between Raytheon and Norwegian missile manufacturer Kongsberg and both defense contractors know they have a hit on their hands.

That enthusiasm is based on performance. The NSM does something interesting in its terminal phase. It initiates random flight movements that assist the missile with evading enemy countermeasures. Advanced composite materials in the missile’s body also make it more difficult to track. The range is excellent – it really helps with the over-the-horizon standoff missile fight – tactics that would come in handy during a potential conflict with China.

Helping the Navy and Marine Corps

The Naval Strike Missile was originally intended for the Littoral Combat Ship (LCS). In 2019, the missile was fielded on its first LCS. The marines are also excited about the Naval Strike Missile potentially being deployed on its amphibious warfare ships. The NSM, paired with stand-off air-to-ground missiles fired by marine aircraft, would clear the way for an amphibious landing and make near-peer competitors such as China duck their heads for cover in potential combat scenarios. To make this happen, Raytheon and Kongsberg would have to ramp up production.

How About Launching an NSM from an Unmanned Ground Vehicle?

The Marines have another concept they are testing – firing the NSM from unmanned launchers on land. This is called the NMESIS or Navy-Marine Corps Expeditionary Ship Interdiction System.

NMESIS uses unmanned, remote-controlled Joint Light Tactical Vehicles as a ground-based launcher. This fits right in with the new Marine Corps strategy that calls for the use of stand-off missiles instead of tanks.

The marines tested the NMESIS for the first time in April. This was just 14 months after they first discussed it in their budget. Then this summer NEMESIS fired a Naval Strike Missile from Hawaii at an old frigate and assisted in sinking the ship.

The Future of the Navy and Marine Corps

Standoff missiles such as the NSM are the future of the Navy and Marine Corps.

The Littoral Combat Ship, to be sure, has its problems. There have been numerous mechanical issues and failures and two have been decommissioned. But the Naval Strike Missile may give the Littoral Combat Ship a new lease on life. The Chinese have noted this progression while using three Chinese naval ships to track just one LCS. This is a different type of activity for the Chinese to devote three ships instead of one to spy on an LCS. Clearly the Chinese are concerned.

The Marines, on the other hand, have to be excited. They have a remote-controlled ground-based cruise missile that is hard to detect and is very fast and agile. This over-the-horizon capability is just what the force needs to make it fit in with its modernization strategy of emphasizing amphibious warfare and planning for future conflict on islands in East Asia.