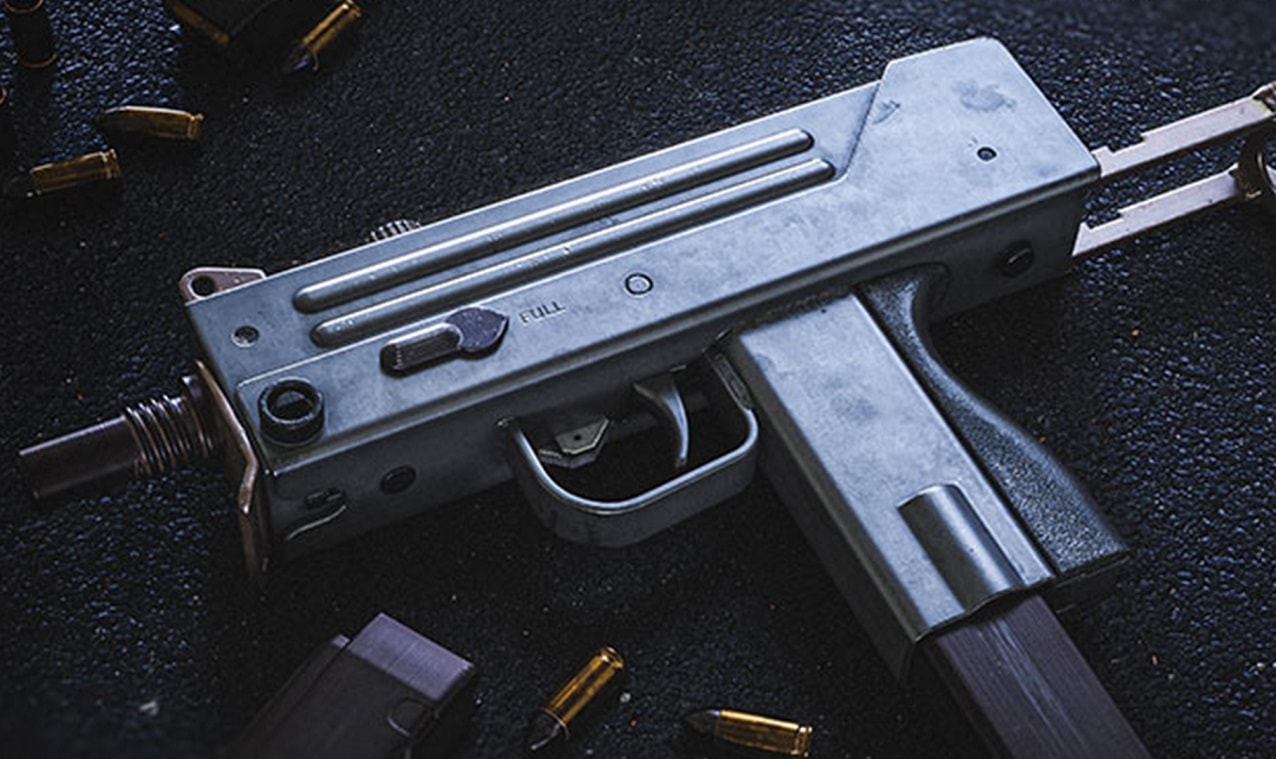 MAC 10, a 4 Minute Gun History: After leaving the influential Los Angeles gangsta rap group NWA, Ice Cube went solo and in 1992 released the track “Gangsta’s Fairytale, Pt.2,” which contained the lyrics “They got the Mac-10 pointed out the coop.” It was the first time the Military Armament Corporation Model 10, more commonly but unofficially known as the MAC-10, had been referenced in a song.

It wouldn’t be last.

Along with the AK-47, the Model 10 has been mentioned in dozens of songs with artists such as Tupac Shakur (aka 2Pac), Lil’ Duke and Young Thug praising the firearm. It wasn’t just rapped about either, many gangsta rappers and actual gang members carried the firearm.

It had made its movie debut almost two decades earlier when it was carried not by an OG (original gangsta) but rather by former western star John Wayne when the Duke was looking to break out into films set in the modern era. Instead of playing a marshal on the frontier, Wayne – who had actually turned down the role of Harry Callahan in Dirty Harry – played a similar hard-nosed detective in the film McQ. The gun was later carried by such stars as Michael Caine, James Caan, Pam Grier, Kurt Russell and Bruce Willis.

The Model 10’s history actually dates back even further to the 1960s when it was developed by Gordon B. Ingram at Military Armament Corporation as a compact, select-fire, straight blowback-operated weapon originally chambered in the .45 ACP cartridge. It fires from an open bolt, which features a telescoping design similar to the one employed on the Israeli-made Uzi. Because it is extremely lightweight, the M10 had a very fast cyclic rate of 1,090 rounds per minute, and even faster in the 9x19mm Luger Parabellum version at upwards of 1,500 rounds per minute; but is far from accurate in its fully automatic mode. Its effective range is just fifty meters with the .45 ACP round and seventy meters with the 9mm version.

More compact than the Uzi, the M10 is just a foot long and 9.45 inches with the stock extended, and it weighs just 6.26 pounds empty (without suppressor). It is fed from 30-round detachable box magazines for .45 and 32-round mags for the 9mm version. It was widely used with an iconic two-stage suppressor that was designed to reduce the noise and muzzle flash – and when used with subsonic ammunition has been reported to be among the quietest submachine guns produced.

The MAC 10 was never actually adopted as a standard-issue weapon by the U.S. Army, but it was used by various special forces units during the Vietnam War and later during the Invasion of Grenada, as well as by some law enforcement units in the United States. It was also exported to some Asian and South American countries.

The civilian pistol version, which featured a different operation from the military/law enforcement model and lacked the folding stock, fell under the 1994 Assault Weapon Ban, and it was one of the few firearms specifically in the ban. A modified version of the more compact Model 11 (M11) was introduced, and it eliminated the threaded barrel and accepted a proprietary magazine that only held ten rounds.

In the 1980s the Model 10 had been popularized in movies and TV shows such as The A-Team and Miami Vice, before gaining the attention of the hip hop community, which then made it infamous. The irony is that by the time the gun gained notoriety, the Military Armament Corporation had gone out of business. The rights had transferred to Georgia-based RPB Industries, while other companies produced variants including the Cobray-made civilian version.

The M10 was loved by movie producers, who likely found the compact weapon easy to frame on the big screen, but it also was well-liked by criminals. It was used in the high-profile shootings including the killing of drug kingpin Jimenez Panesso in Miami in 1979 and in the murder of radio talk show host Alan Berg by a member of the Neo-Nazi group The Order in 1984 in Denver.

The gun’s infamy lives on in countless rap songs – called out by would-be gangstas who never truly understood that it was an underwhelming firearm that lacked range and was anything but accurate.