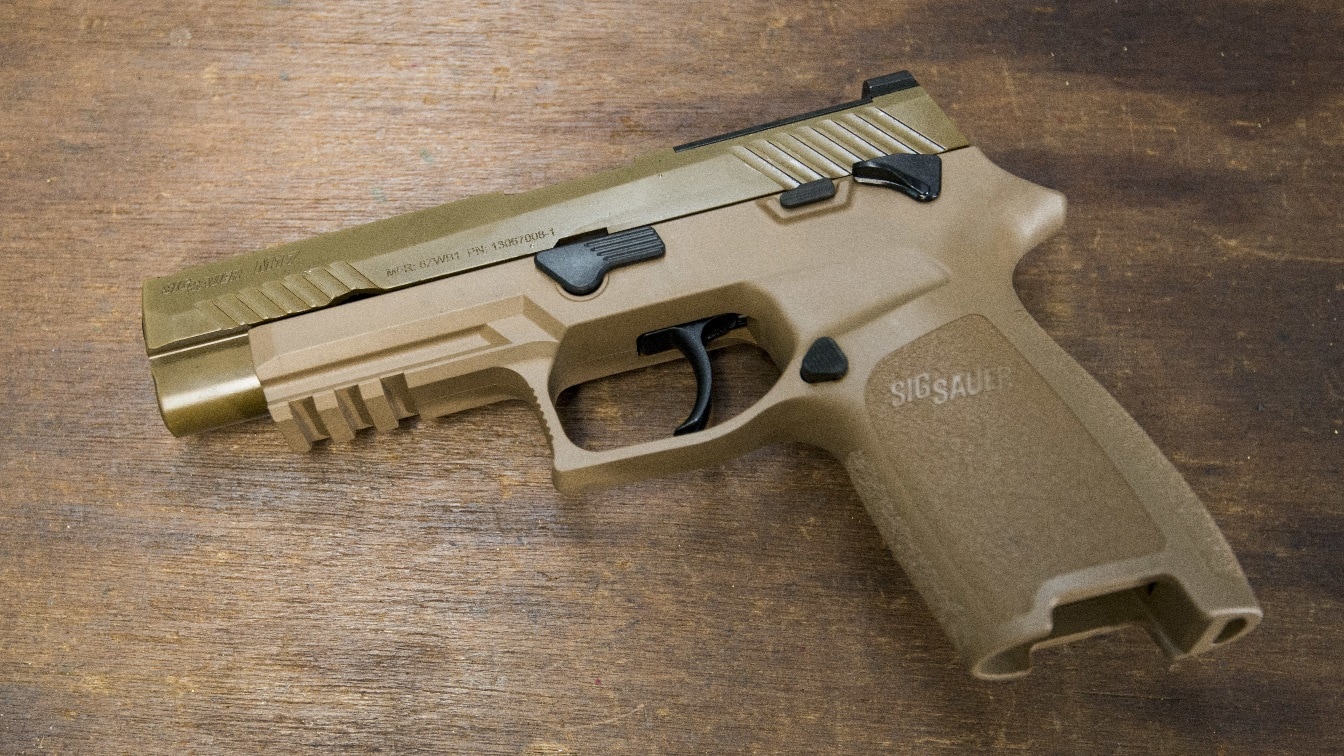 New M17 pistols, the new handguns of the U.S. Army, made by Sig Sauer, lay on a table as Soldiers assigned to Allied Forces North Battalion familiarize themselves with the weapon replacing the M9 pistol, in Chièvres, Belgium, Feb. 11, 2020. (U.S. Army photo by Pierre-Etienne Courtejoie)

Sig Sauer P320: The Army Loves It, But Trouble Might Be Brewing – You don’t have to be in the military to get the Sig Sauer P320-M17 and M18. The P320-M17 and P320-M18 are the civilian models of the M17 and M18, which are the official pistols of the U.S. armed forces. Most reviews by pistol enthusiasts are positive with Sig Sauer having a top-tier reputation among gun manufacturers. The M17 and M18 are reportedly accurate, with firing that often results in tight shot groups. By most accounts, it has a good feel with a smooth action. The modular handgun system allows you to change core parts to customize the handgun for various tactical requirements.

However, the baseline version of the pistol, the P320, had three alleged unexplained accidental discharges chronicled in three different outstanding lawsuits this year. Another class-action lawsuit about the P320 has been settled.

How Did It Get Picked by the Military?

Sig Sauer won the U.S. military’s Modular Handgun System competition in 2017 over Beretta, Glock, and Smith & Wesson, among other competitors, for a 10-year $580 million contract. It replaced the Beretta M9, which had been in service for almost 40 years.

The M17 and M18 civilian versions of the pistol are similar to the military versions. The civilian model instead has black controls rather than tan-colored controls. The M17 has a 4.7-inch barrel. The M18 is more compact with a 3.9 inch barrel. Both can be equipped with red dot optics.

The baseline P320 has endured some problems.

A federal agent in Delaware introduced a $10 million lawsuit against Sig Sauer this year. A holstered base P320 allegedly had a mysterious accidental discharge without pulling the trigger. In 2020, the agent, who is a former marine, was doing his routine training with the P320. He was told to shoot two rounds. When he put his hand on the grip, the weapon fired, according to the lawsuit. The round hit him in the hip and then came out the back of his thigh causing much damage.

Another lawsuit filed in August of this year alleged that a police officer in Massachusetts was carrying his P320 in a duffel bag wrapped well with a cloth. The officer was hurt in his leg when the gun went off without a trigger pill. A police officer in Texas also has a $15 million lawsuit against Sig Sauer after she said her P320 was fired when it was in her purse and hit her in the leg.

To be sure, most users do not choose to carry any firearm in a gym bag or purse unless it is holstered. The police officer in Texas said she did have her piece holstered. But these three cases are significant. The alleged misfires are happening with the baseline P320, not the P320 M17 or M18. Sig Sauer is not commenting on the lawsuits, but it did have a voluntary update program in 2017 that put in different triggers on the P320 to address trigger issues. 1945 will keep an eye out for any accidental discharge problems with the M17 or M18 variants.