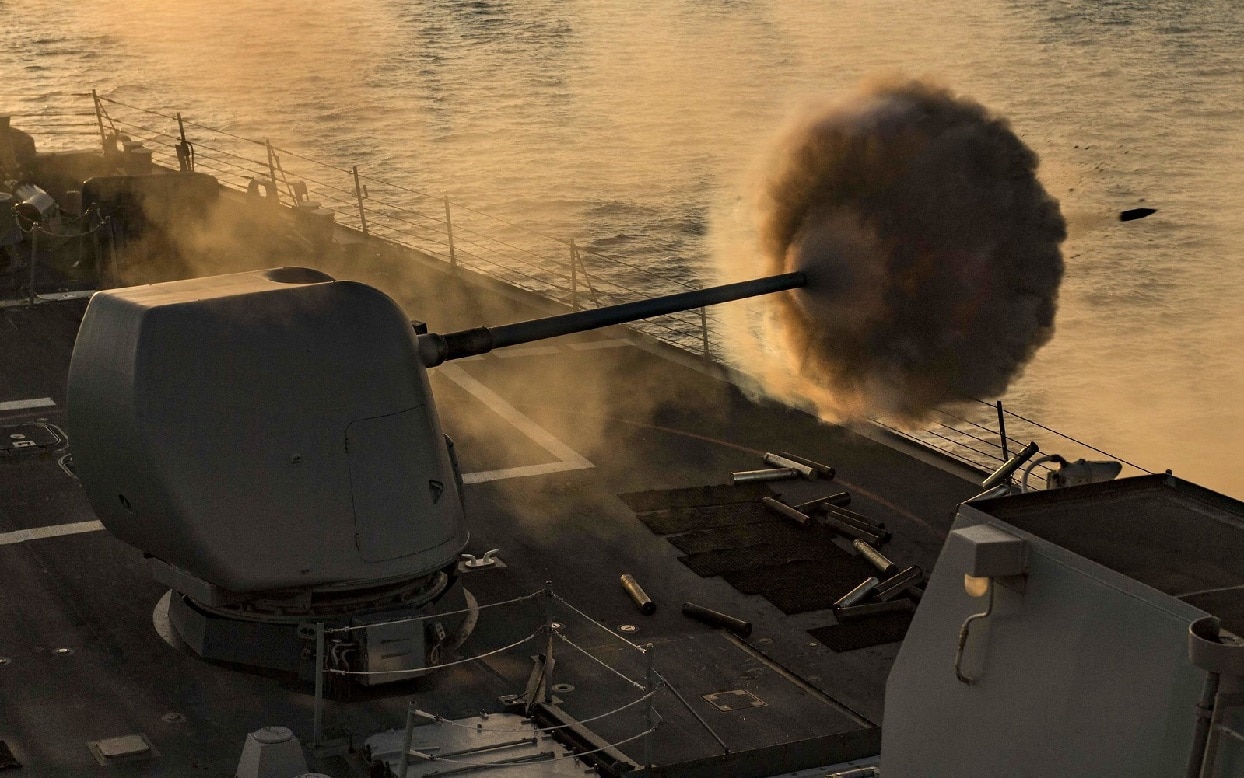 MEDITERRANEAN SEA (Sept. 24, 2018) The Arleigh Burke-class guided-missile destroyer USS Carney (DDG 64) fires its 5-inch gun during a live-fire exercise, Sept. 24, 2018. Carney, forward-deployed to Rota, Spain, is on its fifth patrol in the U.S. 6th Fleet area of operations in support of regional allies and partners as well as U.S. national security interests in Europe and Africa.

The Navy Has Plans Beyond Its Railgun: A “railgun” is a concept that may seem like something straight out of science fiction: a weapon that could utilize a large circuit to launch a projectile far further and at exceeding greater speeds than one launched by a chemical reaction. There have been real-world efforts to develop such a platform, with the earliest attempts dating back more than a century. Yet most have ended in failure – suggesting it is easier for science fiction writers to dream up such fantastic weapons than it is for engineers to actually make them a reality.

That’s not uncommon for many hypothetical designs, but after more than a century of efforts – albeit most occurred before much of the technology to make this a reality even existed – it would seem that it is a now or never moment.

This has certainly been the case for the United States Navy, which has invested upwards of $500 million into its electromagnetic railgun (EMRG) program. The goal of the project was to develop a weapon that could be capable of firing projectiles at hypersonic speeds of 4,500mph or more. Because of the high speed, mass, and kinetic energy, the projectile wouldn’t even need to contain explosives to inflict damage.

Yet, after years of troubled development, the much-hyped supergun has made limited progress and is now largely stuck in the research and development stage. And it hasn’t been for lack of effort, or as noted money.

There certainly exists the basic technology – which includes a large (very large) power source, a pair of parallel rails, and a moving armature. The concept itself is rather simple, but since it was first envisioned, the basic issue has been one of obtaining enough power to actually launch a projectile in a controlled and reliable manner. A railgun could require millions of amps to create a magnetic field required to launch the projectile. This is why the efforts have been largely limited to ships.

Even if the Navy is unable to perfect the EMRG, the service is now reported to be pursuing an offshoot – a hypervelocity projectile (HVP) that can be fired from existing gun systems reported Popular Mechanics. The HVP was developed to be fired by the Navy’s EMRG but could still be modified to fire from traditional gunpowder-based guns instead, including the 127mm deck guns.

It would still offer some significant advantages over current ordnance, including the fact that the HVP could have a top speed of Mach 3 when fired from a chemical energy gun. That’s only half the speed it would have if fired from an EMRG, but still a vast improvement over current 127mm projectiles.

Such a projectile could be used in long-range strike missions against land targets and enemy warships but would be fast enough to be used against aircraft and even missiles. Popular Mechanics noted that the USS Dewey even fired twenty of the HVPs during a 2018 RIMPAC naval exercise in what was the first reported use of the new weapon at sea.

The U.S. Navy already has more than a hundred launchers in service, and that includes the 120 Mk. 45 guns on its Ticonderoga-class missile cruisers and Arleigh Burke-class guided-missile destroyers. Deploying the HVP would be far more cost-effective than developing new vessels with expensive and hard-to-maintain rail guns. More importantly still is the fact the HVP could even be adapted to work with the guns on the Zumwalt-class destroyers, providing an actual cost-effective projectile.

Of course this likely isn’t the end of the line for the railgun. The Chinese have also been steadily working to develop the technology, but perhaps the U.S. should move forward with the HVP and let China continue to invest heavily in what might never really be a viable platform. Even if this isn’t the “now or never moment,” the costs involved are enough for this project to be put on the backburner until the technology to make it a reality becomes more affordable.