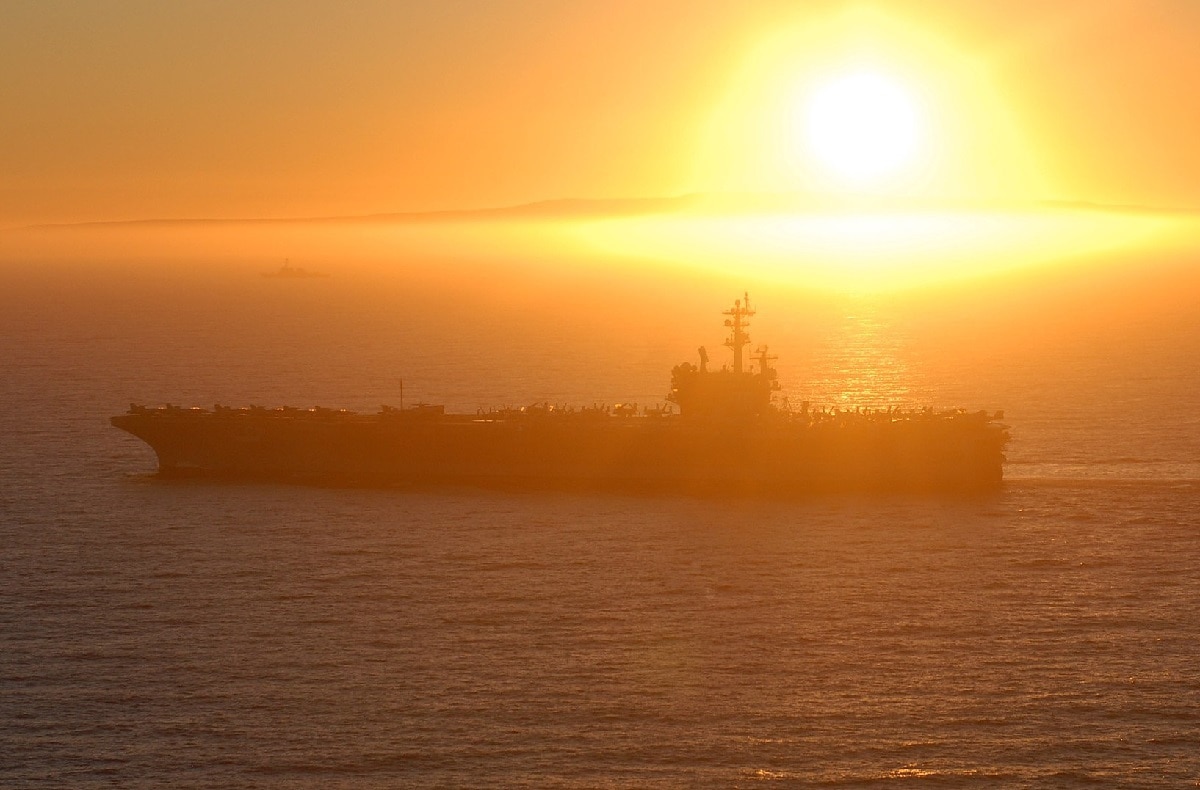 The USS Ronald Reagan Carrier Strike Group (CSG 5) entered the South China Sea on Tuesday as part of a routine mission to uphold the freedom of the seas and as a commitment to American allies and partners in the region. This marks the first time that the CSG 5 has operated in the waters of the South China Sea during its 2021 deployment.

While there, the carrier and her escorts will conduct maritime security operations, which will include flight operations with fixed and rotary-wing aircraft, maritime strike exercises, and coordinated tactical training between surface and air units. Carrier operations in the South China Sea remain a critical component of the U.S. Navy’s routine presence in the Indo-Pacific.

“The South China Sea is pivotal to the free flow of commerce that fuels the economies of those nations committed to international law and rules based order,” said Adm. Pennington via a statement on Tuesday. “It is both a privilege and a pleasure to work alongside our allies, partners, and joint service teammates to provide full spectrum support to key maritime commons and ensure all nations continue to benefit from a free and open Indo-Pacific region.”

USS Ronald Reagan and USS Shiloh departed Yokosuka, Japan, in mid-May to begin their current deployment, and were joined by Halsey, which from Hawaii at the end of May. Carrier Strike Group 5 is currently deployed to the U.S. 7th Fleet area of operations in support of security and stability in the Indo-Pacific region. It is the largest forward-deployed fleet in the world, and for more than seventy years has work with more than thirty-five maritime-nation allies and partners in the Indo-Pacific region to help preserve peace and prevent conflict.

Last month, the U.S. Navy announced that CVN-76, which is homeported in Yokosuka, Japan, would make a rare deployment to the Middle East in support of the U.S. withdrawal of forces from Afghanistan. That mission will leave no U.S. carrier in the Asia-Pacific region for an unknown period of time, which could also explain why the carrier has been deployed to the South China Sea. The United States Navy has increased its presence in the neutral waters in recent years to challenge China’s territorial claims.

The deployment of CSG 5 comes after the Theodore Roosevelt Carrier Strike Group (TRCSG) entered the waters for the second time this year in April. Most recently, the guided-missile destroyer USS Curtis Wilbur (DDG 54) operated with Royal Australian Navy (RAN) Anzac-class frigate HMAS Ballarat (FFH 155) in the South China Sea, June 6 to 11. Wilbur and Ballarat also demonstrated the Navy’s commitment to work with like-minded allies and partners to preserve international order in the South China Sea, which holds significant economic importance.

Around one-third of global maritime trade, roughly $3.5 trillion, as well as third of global crude oil and half of global liquefied natural gas, passes through the sea each annually.