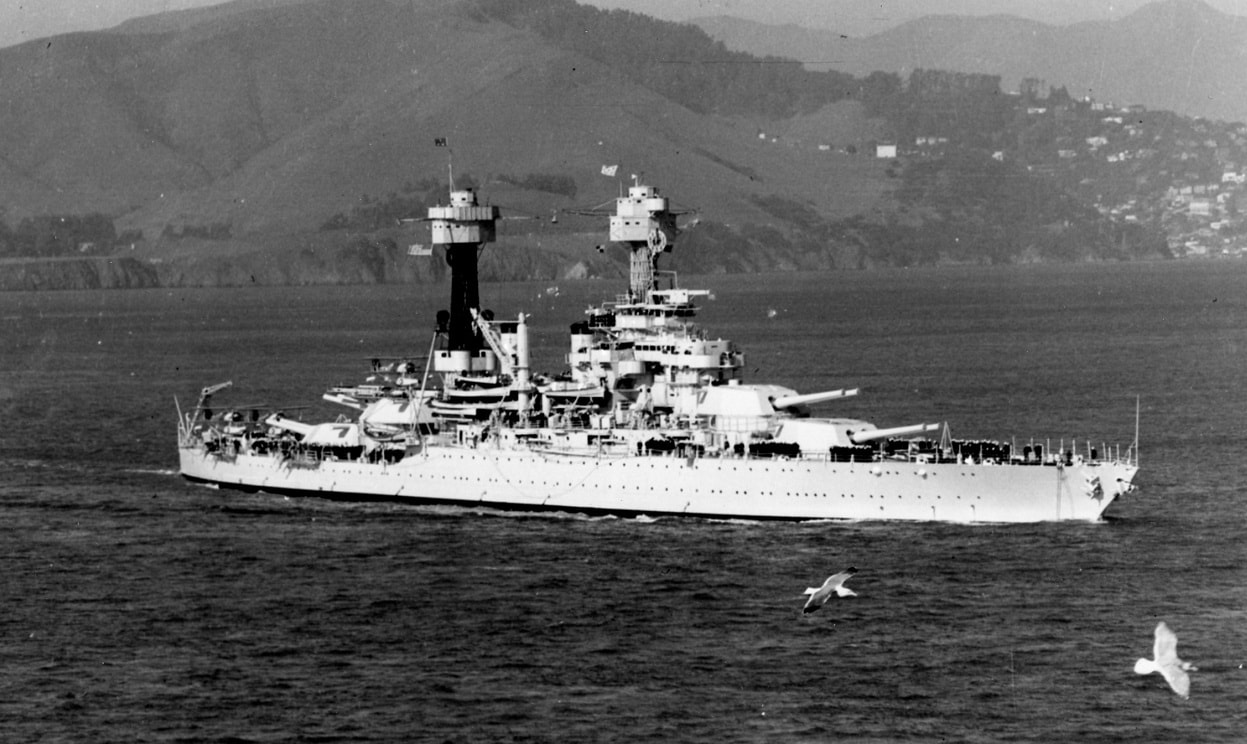 In San Francisco Bay, California, circa 1934. Official U.S. Navy Photograph, now in the collections of the National Archives.

The USS Washington (BB-47) was the second U.S. Navy warship to be named in honor of the 42nd state, and in a strange twist of fate she fell victim to the Washington Naval Treaty for the Limitation of Naval Armaments, and was among just a handful of American capital vessels to be canceled.

Construction of the planned fourth Colorado-class battleship began in Camden, New Jersey on June 30, 1919 – less than eight months after the armistice had ended the fighting in the First World War, and just two days after the signing of the Treaty of Versailles. The 32,600-ton battleship was launched two years later on September 1, 1921 and work had steadily progressed, with the super-dreadnought being nearly 76 percent completed when the construction was ceased on February 8, 1922.

While named for the state in the Pacific Northwest, events in Washington, D.C. meant that the warship wouldn’t be completed. The treaty, which was signed by the major powers of the world including the United States, Great Britain, France, Italy and Japan, limited the number of battleships that the respective nations could possess. Thus the fourth member of the Colorado-class was canceled.

Instead of converting the battleship to another use – such as an aircraft carrier as the Imperial Japanese Navy had done with the Kaga or the U.S. Navy had done with its Lexington-class battlecruisers USS Lexington (CV-2) and USS Saratoga (CV-3) – it was determined that the completed hull had no other use. Instead, the future BB-47 was to be used as a gunnery target.

As her underwater armored protection was already installed, the unfinished battleship proved to be an effective target in November 1924. On the first day of test, the ship was struck by two 400-pound (180 kg) torpedoes as well as three 1-metric ton (1.1-short ton) near-miss bombs. The ship suffered minor damage and even a list of three degrees. Next, the targeted hull suffered from 400 pounds of TNT detonated on board, yet she still remained afloat.

Two days later, the ship took fourteen 14-inch (356mm) direct hits from shells dropped from 4,000 feet (1,200 meters) yet only one penetrated. The incomplete warship proved almost unsinkable, and it was only after the USS Texas and USS New York pounded the ship with fourteen additional 14-inch shells that she was finally sent to the bottom during the gunner target tests on November 26, 1924. The tests also concluded that despite holding up well in the tests, the deck armor on the U.S. Navy’s battleships was inadequate. Future battleships were to be fitted with triple bottoms consisting of underwater armor with three layers.

The name was reused nearly two decades later for the USS Washington (BB-56), the second of two North Carolina-class battleships – the first warships constructed after the end of the Washington Treaty.