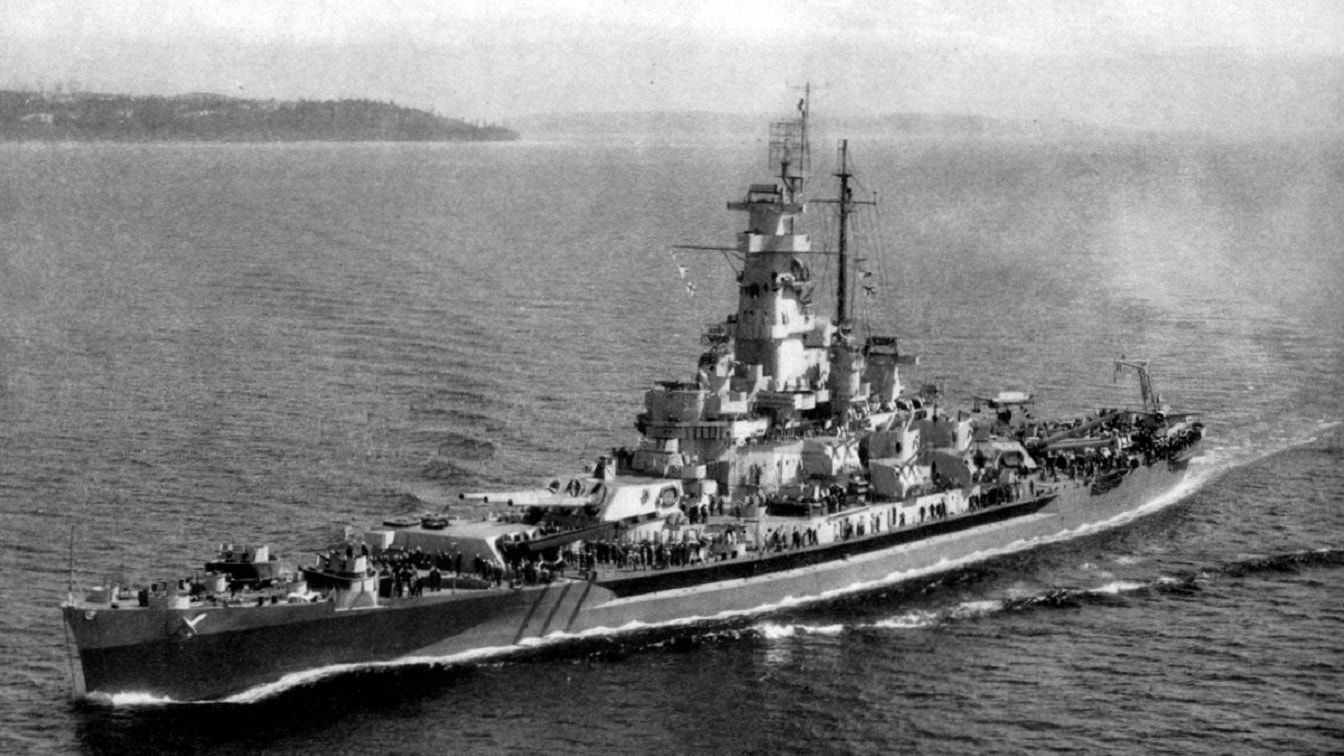 The U.S. Navy battleship USS Massachusetts (BB-59) underway, most probably after her refit at the Puget Sound Naval Shipyard, Washington (USA), circa in July 1944. She is painted in Camouflage Measure 22.

Warship design is a political process as much as an engineering challenge. Never was that more true than during the interwar decades, the heyday of naval arms control. Shipwrights in those days thought in terms of tradeoffs among speed, protection, and armament. You couldn’t have it all. For instance, adding more protection to a man-of-war—chiefly armor plating—to help it withstand enemy gunfire meant adding weight. And adding weight meant a slower vessel, with all the tactical disadvantages that go with it. And to make matters trickier still, mandates from on high commonly shaped how technicians did their work.

This all came to mind afresh over the holidays, when I spent a happy afternoon reading retired navy commander Strafford Morss’s article “The Machinery Arrangements of USS Massachusetts (BB-59),” which appeared in Warship International back in 2004. I had the good fortune to deliver remarks on board Massachusetts—a World War II-era South Dakota-class dreadnought berthed in Fall River, Massachusetts, an easy ride from the homestead—on Pearl Harbor Day. Afterward, the director of Battleship Cove, a collection of historic warships including Massachusetts, dropped me the article. I was hooked.

Seldom do I indulge in battleship geekdom nowadays. It was good to have the opportunity.

Now, “The Machinery Arrangements of USS Massachusetts (BB-59)” is not an instant crowd-pleaser unless you like learning about the basic steam cycle, care about what a deaereating feed tank or a ship’s service turbogenerator is, or the like. Few do, especially now that the age of steamships is on the wane. These are arcane topics. But Morss does touch on items of general interest, spotlighting attention on the interface among theory, engineering, and domestic and foreign politics. Shipbuilding is not just about building a better weapon. It’s about building that weapon within political constraints that may—and often do—work against optimal design.

Thus has it been since the inception of the republic. For instance, Ian Toll’s masterwork Six Frigates, which recounts the origins of the U.S. Navy, shows that politics is always and forever part of ship design and manufacture. During the founding era navy leaders and Congress took to scattering shipbuilding contracts among multiple seaports in order to spread the wealth around. Then as now, taxpayer largesse built goodwill among the people who benefited from it. Popular goodwill meant votes come election time. And politicians like votes.

Politics impinged on fleet-building during the age of sail.

Fast forward to the age of steam, when America was making its debut as a regional naval power of note. Early U.S. Navy battlewagons were designated “coastal-defense battleships,” a contradiction in terms for Mahanians who believed the best battle fleet was a free-range fleet capable of roaming the seven seas in search of peer adversaries. Why? To appease sentiment in Congress and the populace. Many wanted the United States to continue its traditional policy of abstaining from European great-power controversies. Coastal battleships, that is, were designed with limited fuel capacity precisely to handicap their ability to make transatlantic voyages. They had to stay close to home—and thus could not entangle the republic in power politics far away.

Battleship design during those early days was a function of how Americans viewed their role in the world.

Sometimes politicians involve themselves directly in technical questions. In the early twentieth century President Theodore Roosevelt, an erstwhile assistant secretary of the navy and a naval historian of some repute, took a direct hand in battleship design. In 1908 TR careened across Long Island Sound from his home in Oyster Bay, New York, to preside over the first day of the “Battleship Conference” at the Naval War College in Newport, Rhode Island. Conference attendees evaluated feedback from the “Great White Fleet,” which at the time was circumnavigating the globe and putting ship design to the test. The conference recommended improvements later incorporated into the battle fleet.

This brings us back to USS Massachusetts. Before World War II, notes Morss, the U.S. battle fleet was about five knots (nautical miles per hour) slower than likely antagonists such as the Imperial Japanese Navy. This was a significant tactical shortcoming. Navy chieftains resolved to close the speed mismatch but had to abide by tonnage limits put in place by treaty after World War I. Naval arms accords imposed a fifteen-year holiday on battleship construction while capping maximum tonnage at 35,000 tons once construction resumed. Treaty adherents subsequently raised the total to 45,000 when it became obvious the future Axis powers had no intention of complying with treaty limits.

Oh, and there were physical constraints such as the 110-foot width of the Panama Canal. Ships could be no broader than that.

Navy leaders meant the South Dakota class to improve upon the preceding North Carolina class. While of sound design, the North Carolinas were meant to carry 14-inch guns as their main armament, and, true to U.S. Navy shipbuilding philosophy, were designed with armor able to withstand fire from peer vessels that also sported 14-inch guns. During the construction of USS North Carolina, though, navy leaders opted to substitute in heavier 16-inch guns to keep up with likely foes. That meant North Carolina-class dreadnoughts had inferior protection. (The Iowa-class “fast battleships” built during World War II were also unable to withstand their own main battery.)

The South Dakota class was supposed to rectify this discrepancy between armament and protection. But keeping the higher speed and the 16-inch, 45-caliber guns found onboard North Carolina-class ships while adding stout armor—all while staying within treaty bounds vis-à-vis tonnage—proved to be a dismaying challenge. Designers ultimately found themselves compelled to draw up plans for a class shorter in length than its predecessor. The South Dakota class also drew more water, with a draft two feet, nine inches greater than that of the North Carolina class.

Decisions handed down by senior political and military leaders, then, dictated technical minutiae such as the dimensions of the propulsion plant on board Massachusetts and her sisters. By all accounts wartime performance vindicated the design of the South Dakota class. Massachusetts compiled an enviable battle record in the Mediterranean Sea and the Pacific, while sister ship South Dakota distinguished herself at the Second Naval Battle of Guadalcanal and Indiana and Alabama rendered good service delivering naval gunfire support during amphibious operations against Japan.

But it need not have been so. It’s far from hard to imagine circumstances when politics might malform a ship class. In fact, it has happened within not-so-distant memory. In the late 1970s, fretting about shipbuilding costs, Congress mandated that the forthcoming Ticonderoga-class cruisers share the same hull form with Spruance-class destroyers. That meant mounting cruiser sensors and weaponry—in the form of the now-ubiquitous Aegis combat system—on hulls not really meant to accommodate such extravagant equipment. The result was a top-heavy vessel afflicted with numerous endemic maintenance problems.

Nautical historian and theorist Julian Corbett maintained that the ideas in vogue in a particular age manifest themselves in ship design. It’s worth remembering that some of these prevailing ideas have little to do with technical wizardry, and indeed may conflict with it. Ships are political and cultural artifacts as well as engineering marvels. The U.S. Navy neglects the political dimension of shipbuilding at its peril.

Dr. James Holmes holds the J. C. Wylie Chair of Maritime Strategy at the Naval War College and served on the faculty of the University of Georgia School of Public and International Affairs. A former U.S. Navy surface-warfare officer, he was the last gunnery officer in history to fire a battleship’s big guns in anger, during the first Gulf War in 1991. He earned the Naval War College Foundation Award in 1994, signifying the top graduate in his class. His books include Red Star over the Pacific, an Atlantic Monthly Best Book of 2010, and a fixture on the Navy Professional Reading List. General James Mattis deems him “troublesome.”