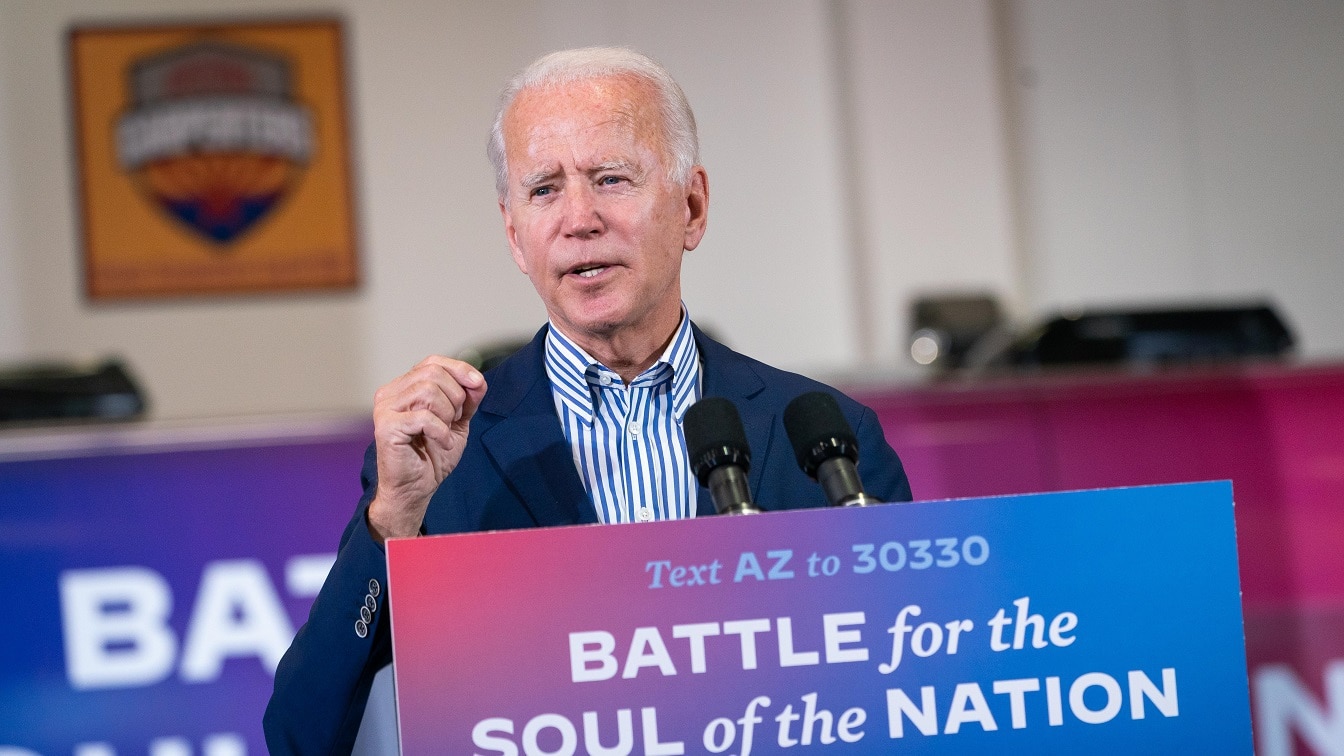 Joe Biden Speaking at Campaign Rally in Arizona in 2020.

An especially egregious sin that a foreign policy team can commit is to send inconsistent signals to a potential adversary about a prominent issue. From its earliest days, Joe Biden’s administration has been guilty of that sin with respect to Washington’s Taiwan policy; the president’s advisers have found themselves “clarifying” (i.e., walking back) Biden’s more impetuous statements about the nature and extent of the U.S. commitment to the island’s security and de facto independence. An even greater number of mixed messages have been coming out of the administration regarding policy toward Ukraine in recent months. The potential adverse consequences of such diplomatic ineptitude about Ukraine appear to be even more imminent and alarming than those that might result from the administration’s mishandling of the Taiwan issue.

In his April 2 telephone call with Ukraine’s president Volodymr Zelensky, President Biden expressed Washington’s “unwavering support for Ukraine’s sovereignty and territorial integrity in the face of Russia’s ongoing aggression in the Donbas.”  At a September 1 meeting in the Oval Office, Zelensky received similar expressions of U.S. backing from the president.

The president, Secretary of State Antony Blinken, and other officials have made similar statements on several more occasions. On December 2, Blinken again insisted that Washington’s commitment to Ukraine’s “territorial integrity” is “unwavering,” and he explicitly warned Moscow against continuing the buildup of Russian military forces near the border with its neighbor.

Such pledges of support at least implied that U.S. military assistance would be forthcoming in the event of a crisis.  U.S. officials also continued to express support for adding Ukraine to NATO, a step that would create an obligation under Article 5 of the North Atlantic Treaty for the United States and all other NATO members to come to Ukraine’s defense if it became a victim of aggression.

However, Russian leaders have provided clear warnings on multiple occasions over the years that making Ukraine a U.S. defense client or a member of NATO would cross a red line that threatened Russia’s vital security interests.  Concern about Western intentions led to a Russian military buildup on Ukraine’s borders in April and an even larger deployment in late 2021 and early 2022. Then in December, the Kremlin demanded a series of security guarantees from the United States and NATO.  Two of the key demands were that Ukraine never becomes a NATO member and that the Alliance pull back its forces from other areas in Eastern Europe.

The scope and intensity of Moscow’s demands seem to catch the Biden administration off guard. It responded by agreeing to a series of bilateral talks to resolve the growing crisis. The outcome of those talks remains highly uncertain, however, and a dangerous crisis atmosphere continues.

Officially, the administration takes the position that no outside power can exercise a veto over which countries, Ukraine included, can join the Alliance. There also appears to be a stubborn unwillingness to commit to reducing the menacing NATO military presence throughout Eastern Europe—a presence that has been increasing for years.

However, there has been a noticeable change in the language that Biden administration officials use when talking about the U.S. commitment to Ukraine’s sovereignty or the likely U.S. response if Russia uses military force against its neighbor. That change created a new wave of mixed messages.  In his two-hour video conference with Russian President Vladimir Putin on December 7, Biden spoke of “harsh consequences” if an invasion took place. However, he only warned of additional economic sanctions and vaguely of “other measures.” Tellingly, he did not caution Putin that U.S. forces would take steps to defend Ukraine.

Blinken now warns that “massive consequences” would result from a Russian attack on Ukraine. But the overall context of his remarks confirms that he means only harsher economic sanctions, not military retaliation.  It is increasingly evident that the United States does not intend to intervene with its own forces if a Russian-Ukrainian war erupts. Unfortunately, just as George Bush’s administration did when it gave Georgian President Mikheil Saakashvili the mistaken impression that his country would have Washington’s military backing, Biden and his foreign policy team may have given Kyiv the impression that the U.S. commitment was much firmer than was actually true. In this case, though, Ukrainian leaders may now be aware of the limitations. Saakashvili did not grasp that reality, initiated a skirmish against Russian troops, and ended up suffering a humiliating defeat.

With respect to U.S. policy toward Ukraine, it now is fairly certain that American military forces are not likely to become involved directly. The Biden administration seems to be executing a last minute, prudent policy retreat from that potential catastrophe. However, the administration keeps muddying the nature of its policies.  A new delivery of U.S. weapons just arrived in Ukraine.  Blinken also has authorized other NATO members, notably the Baltic republics, to transfer U.S. arms in their possession to Ukraine.

Press reports indicate that Washington still may be flirting with even more dangerous “middle options.” Two have attracted the most attention: arming and training Ukrainian “resistance” forces in areas that Russia might seize and sending U.S. military “advisors” to Ukraine.  Both options would constitute reckless provocations, and the administration should spurn the advice of congenital hawks who are pushing such schemes.

The Biden administration would be wise to negotiate in a serious manner with Russia about Ukraine and more general security guarantees with respect to NATO’s presence elsewhere in Eastern Europe. Even the initial decision to expand NATO eastward may well go down as a historic blunder that poisoned East-West relations. Washington’s flirtation with making Ukraine a security client is even more ill-advised. U.S. leaders also need to stop sending mixed signals on the latter issue.  A new, clear message is imperative. That message should be that the United States now recognizes that the previous policies were needlessly provocative and that Washington is now willing to give Moscow reasonable security assurances and pursue a needed rapprochement.  European peace may depend on such realism, clarity, and accommodation, belated as such a policy change might be.

Ted Galen Carpenter, a senior fellow at the Cato Institute and a contributing editor at 19FortyFive, is the author of 12 books and more than 950 articles on international affairs. His latest book is NATO: The Dangerous Dinosaur (2019). Carpenter served as Cato’s director of foreign policy studies from 1986 to 1995 and as vice president for defense and foreign policy studies from 1995 to 2011.