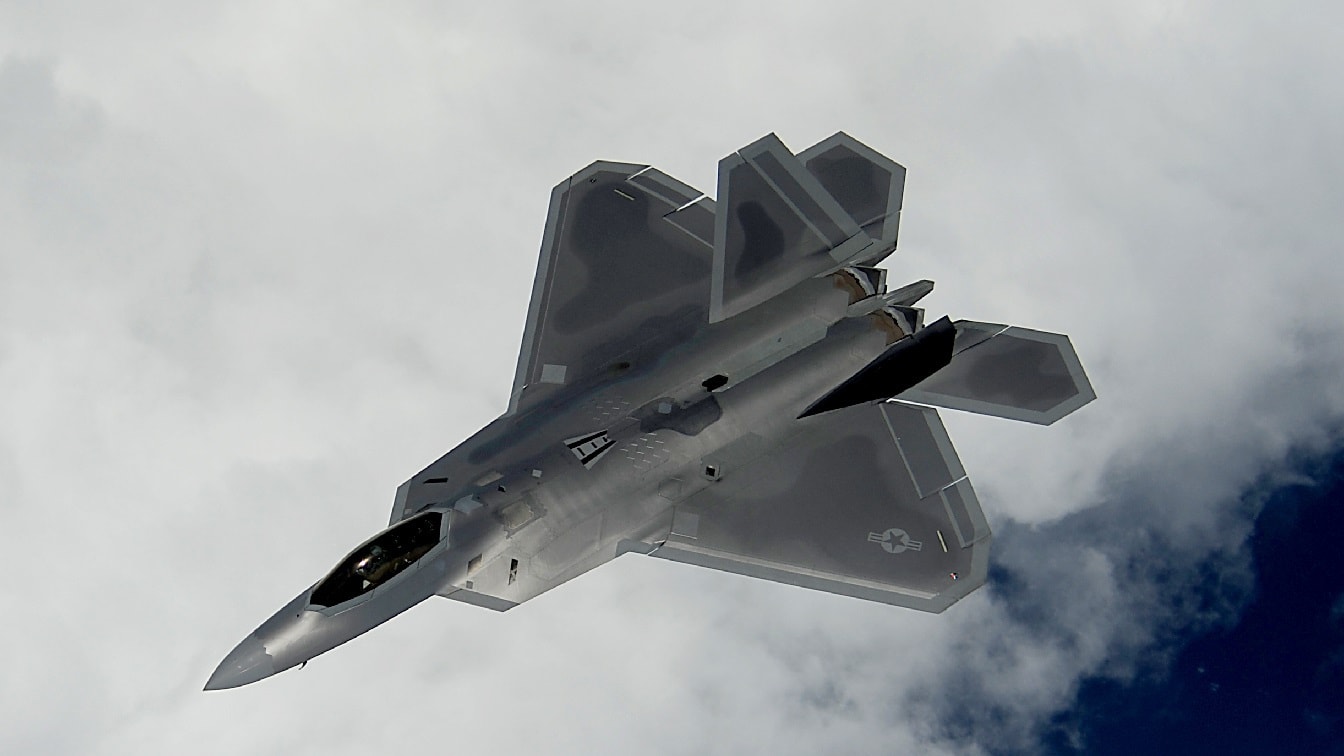 A 1st Fighter Wing's F-22 Raptor from Joint Base Langley-Eustis, Va., pulls away and flies beside a KC-135 Stratotanker with the 756th Air Refueling Squadron, Joint Base Andrews Naval Air Facility, Md., while his wingman refuels off the east coast, July 10, 2012. The first Raptor assigned to the Wing arrived, Jan. 7, 2005. This aircraft was allocated as a trainer, and was docked in a hanger for maintenance personnel to familiarize themselves with its complex systems. The second Raptor, designated for flying operations, arrived, Jan. 18, 2005. On Dec. 15, 2005, Air Combat Command commander, along with the 1st FW commander, announced the 27th Fighter Squadron as fully operational capable to fly, fight and win with the F-22.

Shared Sino-American Interests Could Slow the Slide toward Cold War: It is now fairly obvious that the United States and China are sliding toward some kind of lengthy geopolitical contest. The Biden administration has spoken of ‘great power competition.’ International relations academics see a drift from post-Cold War American unipolarity to a new bipolarity between China and the US. More colloquially, it looks like a cold war, the sort of ‘twilight struggle’ President John Kennedy invoked.

It should go without saying that this is a potential catastrophe. The US-Soviet cold war did not result in a third world war, but it was otherwise terrible. It was hugely expensive. Decades of weapons development drew resources away from poverty alleviation all over the planet. It was hugely risky. Two heavily armed adversaries and their allies pointed massively destructive weapons at each other for decades and had several near-misses of a major war. US-Soviet great power competition may not have exploded in Europe or Northeast Asia, but it spilled into the rest of the planet, dramatically exacerbating the stresses and tensions of decolonization. Multiple post-colonial conflicts were overlain by cold competition, becoming far longer, more violent, and deadlier. Vietnam and Afghanistan are the most obvious examples, but superpower competition worsened events in the Middle East, Latin America, and Africa. The USSR sent so many AK-47 rifles to third-world clients, that it is on multiple countries’ flags.

If the US must fight a cold war like that with China also, then of course it should. The Free World should not accept Chinese regional hegemony in East Asia, and the democracies will find many partners to support that goal. But the US should not spoil for a fight. A Sino-American cold war may still be avoidable because the US shares at least four major interests with China:

China and the US both oppose North Korea’s spiraling, unchecked nuclearization. China has voted for all nine of the UN Security Council resolutions tightening the sanctions regime on the North. It is true that China wants to perpetuate the division of the Korean peninsula more than it wants denuclearization. That is, China will not lean on the North to denuclearize so much that it provokes a regime crisis there. But that still leaves a lot of shared Sino-US interests in North Korea’s weapons of mass destruction.

Both wish to know basic information: the shape of the program; the number of missiles, warheads, and launchers; doctrine on their use; and other data nuclear states commonly share with each other to reduce paranoia and errors. America and China wish to cap or, ideally, rollback the North Korean program, at least somewhat. Here, China and the US share an interest in pulling North Korea into some kind of arms control regime. Both worry about nuclear safety and proliferation in North Korea. The North is deeply corrupt and dysfunctional with a long history of overseas criminality. The US and China share an interest in preventing a North Korean Chernobyl or Pyongyang selling missile or warhead designs.

The US and China trade a lot. They are the two largest economies in the world. Both want market access to the other. Both want their companies in the other country to enjoy basic protections and nondiscrimination. China’s entry into the WTO has been a huge boon to both. It helped China grow rapidly, while pushing down prices for American consumers for two decades. The relationship has grown more fraught; the US business community is not as bullish on China as it once was, and intellectual property protections have become a major issue. But given just how deep the relationship is, unwinding it because of geopolitical pressure would be very costly for both parties.

To finance their trade in goods and services, the US and China buy a lot of paper assets from each other too. China is the second-largest holder of US securities in the world. If the two ‘de-coupled,’ it would impact the currency value for both partners. A China restricted from US markets would see the value of its dollar holdings slide. In a panic, it would likely try to sell them. A trillion dollars of Chinese holdings suddenly entering the global capital market would drive inflation of the dollar. As with a severing of trade, both sides would lose.

By now it is apparent that wealthy democracies alone cannot slow climate change enough. China’s cooperation is necessary (as is that of other large polluters like Brazil and India). Sino-US shared interests are obvious. Both have long coastlines with tens of millions of citizens facing flooding in the future. Both have complex economies designed around the current climate. And both are the world’s worst emitters. If anyone is to lead on climate change, it must be the US and China, ideally working in tandem

A Cold War is Still Likely

A cold war between the US and China seems increasingly likely. Chinese President XI Jinping has taken his government in a significantly more hawkish direction than his predecessors’ more moderate rule. China’s stonewalling on covid has produced an enormous backlash in the US; the American business community is souring the on relationship; the US foreign policy community is increasingly hawkish on Beijing; and Xi’s pressure on China’s Muslims, Hong Kong, and Taiwan are frightening.

But a cold war would be a disaster, for most of the world, including China and the US as well. We should do the best we can to avoid it if possible. The four shared interests suggested here provide at least a few possible offramps before full-blown great power competition is locked in.