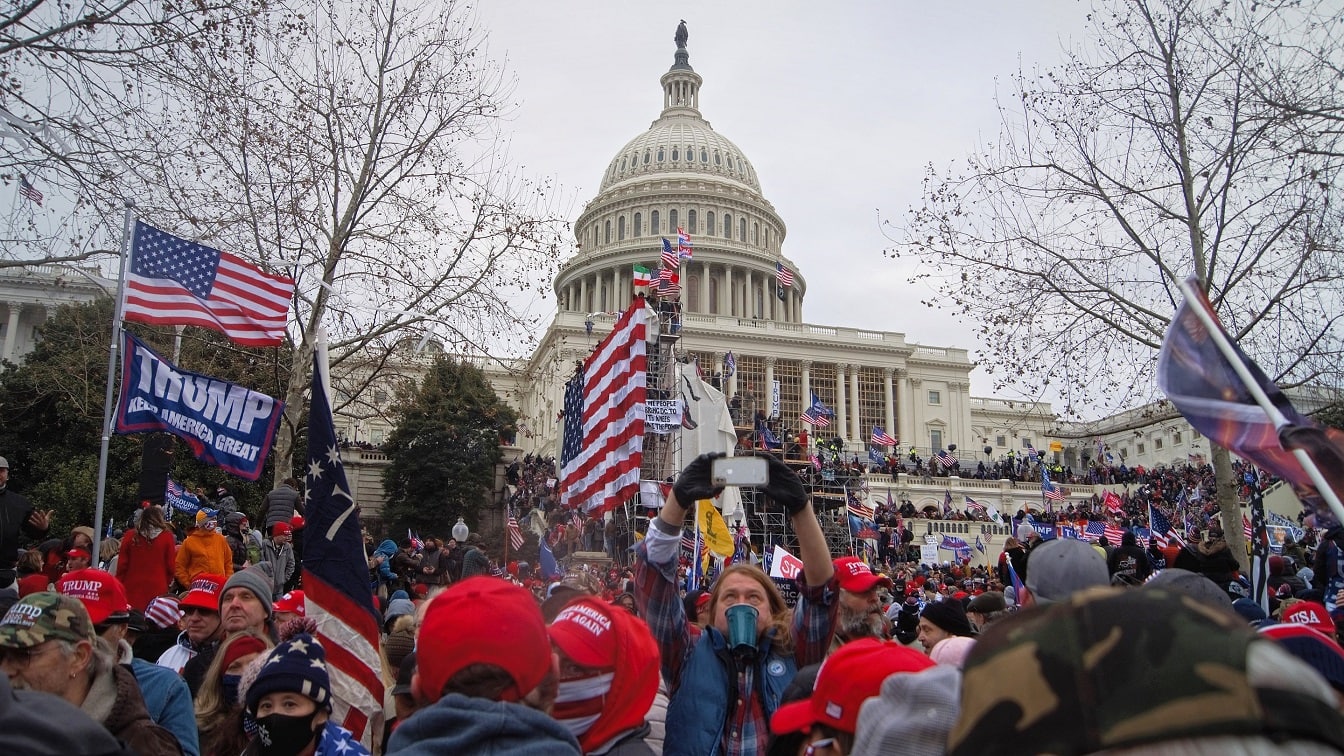 Outside during the US Capitol during the January 6, 2021 attack on the building.

In the aftermath of last year’s insurrection at the U.S. Capitol, I wrote in these pages that, “unless decisive action is taken – quickly – the attack may well prove to have been the opening rounds of increasing instability and violence.” Senior leaders of both parties would have to take actions to mend the divisions, I argued, because failing to try “could condemn our Republic to eventually succumb to a darkness from which we may never fully recover.” The party leaders not only failed to make progress over the past year, but they’ve also stood passively by as conditions have worsened.

The January 6th attack last year was limited to about 2,000 people, contained to the Capitol complex, and was over in a matter of hours. Without remedial action, however, indications are high that America is heading to a much more serious explosion, and the next one could have far greater consequences.

The signs of deterioration are plentiful and pervasive. Numerous stories in recent months in major media have warned of the increasing possibility of civil war in America. The U.S. “today is, once again, headed for civil war,” warned Stephen Marche in The Guardian.  America is closer to a civil war than any of us would like to believe,” echoed professor and CIA researcher Barbara F. Walter. Many want to dismiss such concerns as mere hyperbole.

But civil war in the 1863 sense isn’t the risk. For starters, there obviously aren’t two uniformed field armies poised to take each other on. That doesn’t mean the risk is any less to the United States, however. It means that the risk could take on different, arguably darker, forms.

Already in America, there are many private militias and a growing number of groups that advocate either resistance to the government or forming their own quasi-governmental jurisdictions. Many in America are angry at the police and want to “de-fund” them, arguing that police violence deprives many minorities of justice. At the same time, other people are in staunch defense of the police and consider “de-funders” to be responsible for a spike in violent crime in over a dozen of major cities.

Concurrent with these actions, there are movements in a stunningly high number of states across the nation that want to secede from the union. Newsweek reported that a shocking “66 percent majority of Republicans in 13 Southern states including Texas and Florida are in favor of seceding from the union,” while “47 percent among Democrats in California, Oregon, Washington, Alaska and Hawaii,” also supported leaving the United States.

January 6th Shows We Are A Nation In Trouble

Adding to that is a spike nationwide in violent crime, increasing hostility against political opponents, and an increase of millions of guns in households across America. Layered on top of all that anger and large numbers of armed citizens, is yet another troubling poll just released by CBS News-YouGov that shows a whopping 37% of all Americans now believe violence is sometimes justified, and “62% of Americans said they expect violence over losing in future presidential elections.”

And confirming that the political divide that was so central to last year’s Capitol attack has worsened, the University of Virginia’s Center for Politics published the results of a poll that found that fully 80% of both “Biden and Trump voters agree that elected officials of the other party ‘present a clear and present danger to American democracy.’” It should chill every American to realize that all the views and opinions identified above have surfaced after the violence of January 6th.

Meaning, what happened last year was no one-off aberration. It was evidence of a building trend. The pressures that exploded on January 6th had been years in the building. Since that time the pressures have both expanded and continued to build. Without changes in the direction we’re all headed, it becomes increasingly possible that some societal or political spark could ignite a new conflagration that won’t be limited to one location, won’t only include a couple thousand, and could last far longer than part of one day – and it could include significantly more bloodshed. That, however, is not the biggest danger.

Even with all the increases in the number of militias and individuals who increasingly believe violence in pursuit of political objectives is fair game, in comparison to our population they still represent a significant minority. Without a doubt, most Americans reject the notion of using violence and desire to live peaceful lives.

But if even a minority of Americans begins to engage in violence, it could bring chaos not only to entire cities but regions of the country. Historically, spreading levels of large-scale violence has terrified large segments of the population, and since most earnestly desire to live in security and peace – people have often been willing to follow a strongman who can restore order. In such cases, entire populations have been known to surrender some freedoms in exchange for giving expansive powers to a leader who proves he can indeed bring order, often not caring if that strong man uses immoral or illegal methods to restore societal security.

In other words, if too much chaos comes to America if we start drifting to widespread violence and civil war, the risk of a dictator arising becomes all too real.

Many will scoff at even the possibility of that happening in America – but 10 years ago those same people would have scoffed at the possibility of our venerated Capitol Building being assaulted by a mob, yet it happened. With the continued trend towards the acceptance of more violence, the continuing deterioration of trust in the government, and the rise in the desire of millions to split the country into many parts, the risk of losing our country is real.

Last year I warned that we needed immediate and sustained action to check the deterioration in our country. That warning was ignored. Now the need for remedial action is much more urgent and necessary. Before it’s too late.