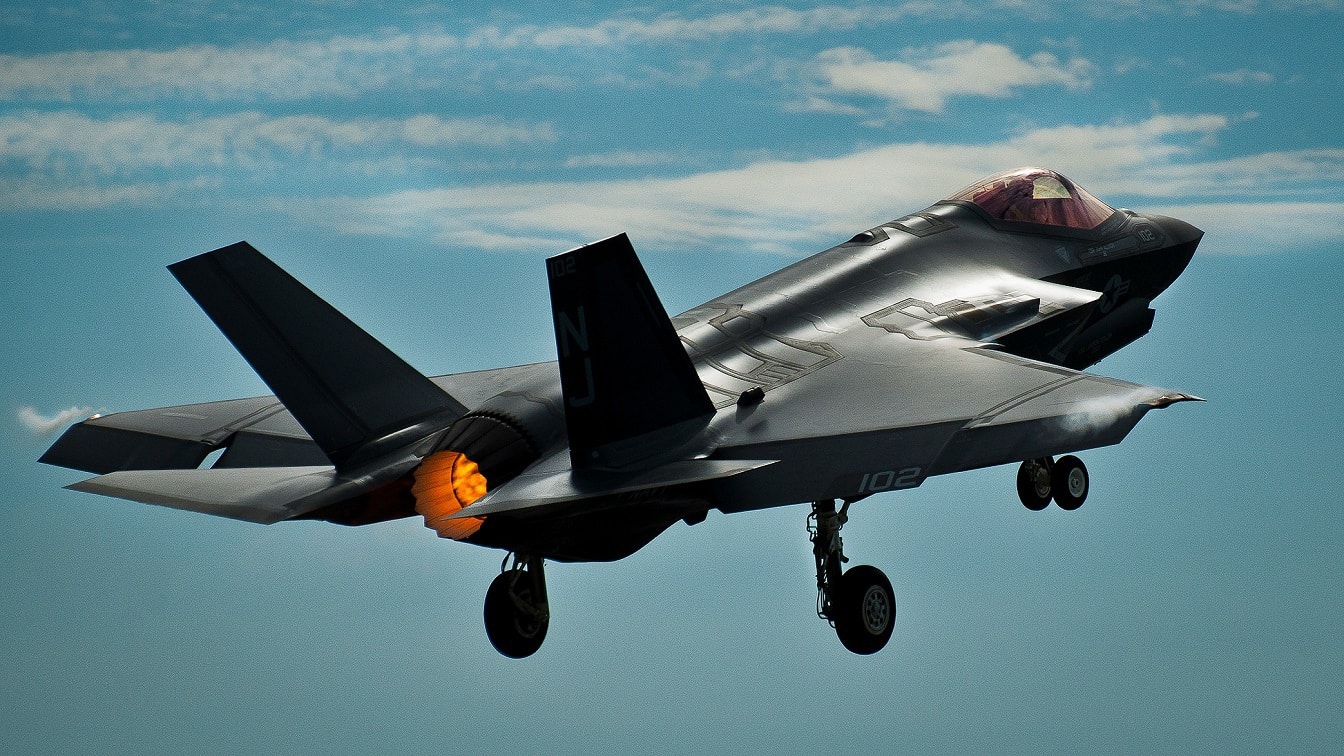 The first F-35C Lightning II sortie takes off from the U.S. Navy F-35 Strike Fighter Squadron VFA 101 at Eglin Air Force Base, Fla. Aug. 14. Sailors have been on station for two years ready for the day they would launch a carrier variant of the military's joint strike fighter. The Navy's first pilot training course at Eglin was concluded in January and the second course began June with seven pilots soon to begin training flight operations in two of the squadron's F-35Cs. (U.S. Air Force photo/Samuel King Jr.)

The F-35 Joint Strike Fighter reached yet another milestone with the first operational U.S. Marine Corps F-35C squadron deploying onboard an aircraft carrier.

This is only the second F-35C squadron that goes on an operational deployment after the Navy’s Strike Fighter Squadron (VFA) 147 “the Argonauts,” which is on deployment with the Carl Vinson Carrier Strike Group in the Indo-Pacific.

“C” Is For Aircraft Carrier

The “Black Knights” are the first Marine Corps and the second squadron in the military to transition to the F-35C from the F/A-18A/C Hornet fighter jet. The naval aviators received their first fifth generation fighters in January 2020, almost two years to the date of the first operational deployment.

“Our ability to operate the F-35C in the Pacific greatly increases the Marine Corps’ naval expeditionary force capabilities by providing us the capacity to employ the most advanced electronic warfare capabilities on any aircraft today in support of fleet operations. In addition, having this asset available greatly increases the Marine Corps’ ability to provide security to our allied nations and preserve a free and open Indo-Pacific,” Lieutenant Colonel Brendan M. Walsh, the commanding officer of the VMFA-314, said in a press release.

This might be the first operational deployment of the Marine Corps’ F-35Cs, but it isn’t their first rodeo out at sea. In the summer, the “Black Knights” spent several weeks underway during workups with the Lincoln Carrier Strike Group leading up to their deployment in January.

Before their deployment, the “Black Knights” had the opportunity to work with the Marine Corps F-35Bs squadrons to work on their interoperability as the two aircraft could find themselves fighting next to each other in a potential conflict with China in the Indo-Pacific theater. The Marine Corps F-35 fighter jets conducted long-range precision strikes flying over 1,000 miles from California to Washington State during these drills.

“The Black Knight’s deployment of F-35C Lightning II aboard USS Abraham Lincoln is the newest chapter in the Marine Corps’ long history of naval integration. The upcoming deployment represents years of hard work and innovation by the Marines and Sailors of VMFA-314, MAG-11, and 3rd MAW. It also reinforces our commitment to fielding the most lethal and ready Navy-Marine Corps force as we project warfighting capabilities throughout the Indo-Pacific region, or globally wherever our nation calls,” Major General Bradford J. Gering, the commanding officer of the 3rd Marine Air Wing, said.

F-35: One Aircraft, Many Flavors

The fifth-generation fighter jet comes in three flavors (A, B, and C).

The F-35A is the conventional take-off version and is the most widely used by air forces around the world.

The F-35B is the Short Take-Off and Vertical Landing (STOVL) version and was designed specifically for the U.S. Marine Corps, but it has entered service in the British and Italian militaries too.

The F-35C is the aircraft carrier version of the fighter jet and comes with a stronger structure and landing gear that can endure the pressures of carrier operations.

In this article:Aircraft Carrier, F-35, F-35C, Military, US Marines, US Navy