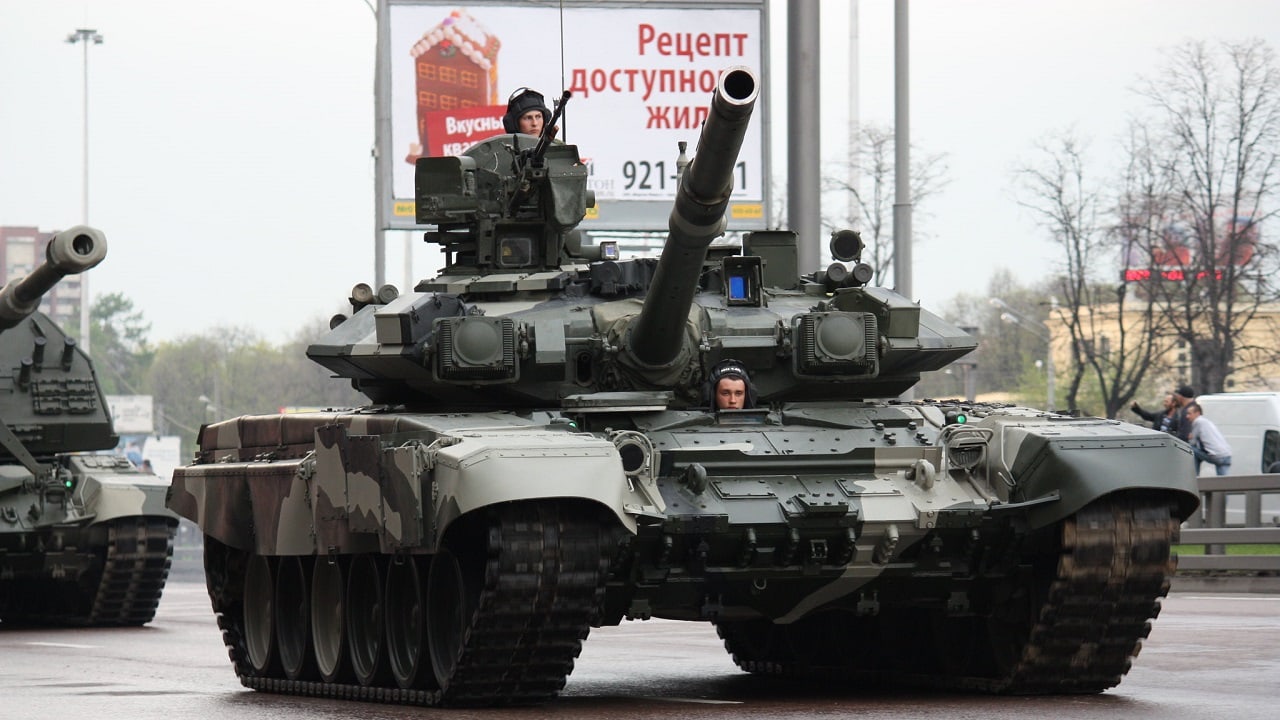 The T-90 is a Russian main battle tank (MBT) derived from the T-72, and is currently the most modern tank in service with the Russian Ground Forces and Naval Infantry. The successor to the T-72BM, the T-90 uses the tank gun and 1G46 gunner sights from the T-80U, a new engine, and thermal sights. Protective measures include Kontakt-5 ERA, laser warning receivers, the EMT-7 electromagnetic pulse (EMP) creator for the destruction of magnetic mines and the Shtora infrared ATGM jamming system. It is designed and built by Uralvagonzavod, in Nizhny Tagil, Russia.

Russia has reportedly massed up to 150,000 troops along its border with Ukraine, and it threatens to continue territorial conquest against its more democratic neighbor that it began in 2014 when it illegally seized and annexed Crimea and much of eastern Ukraine.  Its deployment is the largest military build-up in Europe since the end of the Cold War. It could also presage Europe’s largest conflict since World War II.

It is doubtful if Russia would have moved on to Ukraine had it not so easily gotten away with its 2008 invasion of Georgia and its subsequent creation of pro-Russian proxy states carved out of sovereign Georgian territory.

Three dynamics are pushing Putin forward. The first is a delusion of grandeur. Putin wants to recreate the Soviet Union in all but name. Some American realists counsel appeasement, but there is no reason why the Soviet Union—one of the greatest colonial empires ever built—should be considered the natural state of affairs when the rest of the world has decolonized.

The second is an economic diversion. Putin has run Russia’s economy into the ground. It is a country of first-world restaurants and third-world hospitals. Elites in Moscow might jetset around the globe and the declining middle class might enjoy beach vacations in Turkey or Egypt, but the rest of the country stagnates if not declines. Military crises successfully distract the Russian public and allow Putin to wrap himself in a nationalist flag.

The third is weakness. Simply put, Putin does not take President Joe Biden seriously. Biden’s gaffes—think a “minor incursion”—only compound Putin’s assessment. Nor do Putin and Foreign Minister Sergey Lavrov take Secretary of State Antony Blinken and National Security Advisor Jake Sullivan seriously. They see Blinken as weak, indecisive, and effeminate and Sullivan as young and inexperienced. It behooves the White House and Congress to remember that Washington spin seldom works outside Washington.

It would be unfair only to blame Biden, however. President Donald Trump’s rhetoric both bolstered Putin and diminished the White House. The Ukraine invasion began under President Barack Obama. Secretary of State Hillary Clinton’s “reset” was naive.

The real problem is deeper. Russia’s aggression and sense of impunity did not begin with Georgia, but rather with Japan. In the tail end of World War II, Russia seized southern Sakhalin and the Kuril Islands from Japan. While the Kremlin states the Treaty of San Francisco gave it legal cover to occupy and annex the Japanese territory, the United States disagrees. Indeed, the U.S. Senate found that “nothing the treaty contains is deemed to diminish or prejudice, in favor of the Soviet Union, the right, title, and interest of Japan, or the Allied Powers as defined is said treaty, in and to South Sakhalin and its  adjacent islands, the Kurile Islands, the Habomai Islands, the Island of Shikotan, or any other territory, rights, or interests possessed by Japan on December 7, 1941, or to confer any right, title, or benefit therein or thereto on the Soviet Union….” Even those inclined to read the Treaty of San Francisco as giving Russia sovereignty over South Sakhalin and the Kuril Islands ignore that Russian occupation continues to extend beyond both.

Successive U.S. administrations, distracted by the Cold War and the threat to Europe, largely deferred criticism of Russia’s land grab against Japan. Time laundered Russia’s actions. In hindsight it is clear that the land grab against Japan hewed the path Putin now takes. It convinced the Kremlin that naked aggression and land grabs could work.

As Russia concentrates its forces on Ukraine’s borders, perhaps it is time to reassert U.S. support for Japan, to deploy U.S. forces off Sakhalin and the Kuril Islands, and to encourage Japan to do likewise. This need not presage conflict, but it would be useful to remind Russia that its past territorial aggression is not forgotten and its size is a liability, not an asset. If Russia is forced to divert some forces from Ukraine to watch its eastern flank, all the better.