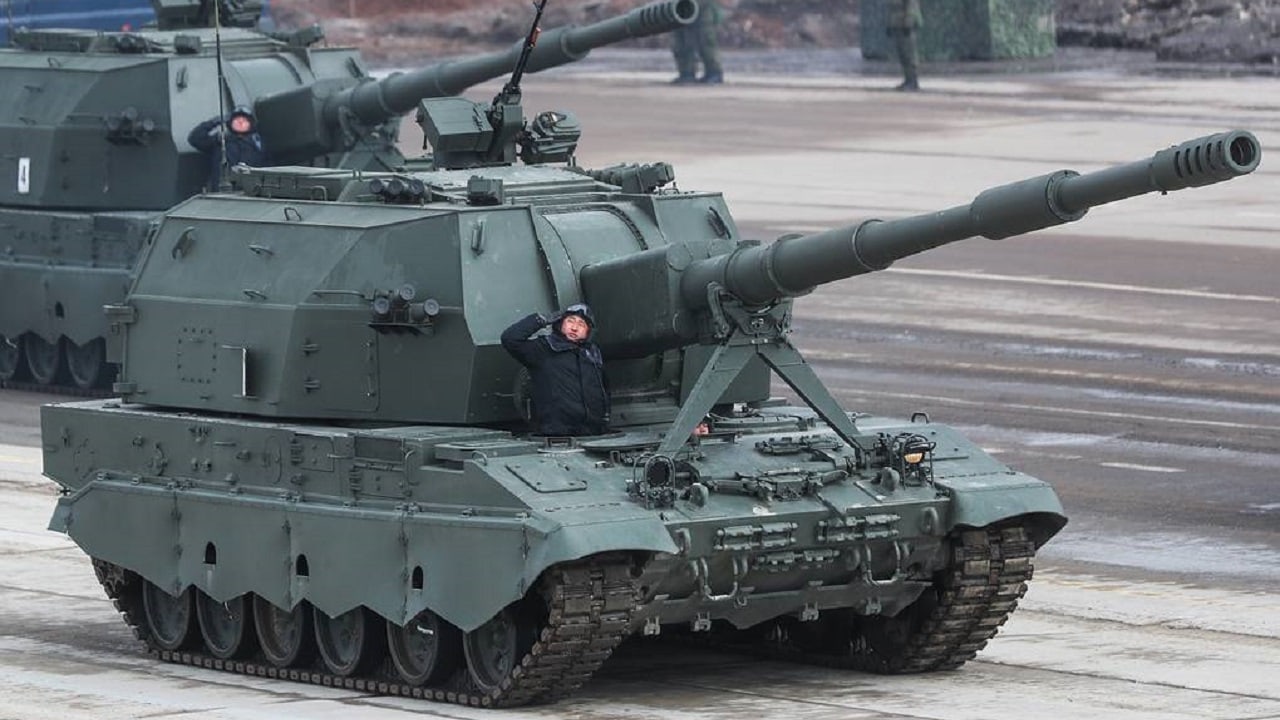 Russian Forces Close Around Kyiv, Break Out of Crimea—But Ukraine Holds the Line at Kharkiv and Mariupol – At 5 AM local time on February 24 Russia finally launched a long forecast full-scale invasion of Ukraine from multiple fronts—one with the objective of destroying the Ukrainian military and decapitating its government. Or in Russian President Putin’s Orwellian language, “a special military operation” to “disarm and de-Nazify” Ukraine.

It appears almost certain Moscow will seek to occupy at a minimum half of Ukraine, but more likely the entire country. That’s because Putin’s goal is not merely to grab additional territory, but to ensure that Ukraine remains cut off from Western military and economic partnership, and firmly under Moscow’s sway. That will involve installing a puppet regime to ensure that happens.

Putin also issued a thinly veiled threat of nuclear attack—“consequences greater than any you have faced in history” should NATO attempt to intervene in assistance to Ukraine.

This article seeks to assess the major developments in the first twelve hours of Russia’s assault on Ukraine.

So far attacks don’t appear to have been aimed at civilian power and water infrastructure, seemingly indicating Russian hopes of a swift victory with limited economic damage. However, some strikes have nonetheless landed on civilian targets, causing fatalities.

That said, Russia has not launched the massive, crippling cyberattacks long expected as part of its strategy—at least, not more than were already harrying Ukraine with on a daily basis before the commencement of kinetic operations.

Additionally, hundreds of rocket and howitzer artillery systems on Ukraine’s border unleashed massive barrages, particularly in the area around Kharkiv. Dud rockets can now be seen planted in the concrete of Ukrainian towns and cities.

Though some analysts speculated Russia might bombard Ukraine for several days before sending in ground forces, that didn’t prove to be the case. Armored columns began rolling into Ukraine just an hour or two after the barrage began.

It’s important to note that the tempo of missiles strikes on the opening day of the war is unlikely to be sustained indefinitely. Cruise and ballistic missiles are highly expensive weapons and Russia has a much smaller inventory of them than the United States does. That’s even true of shorter-range precision munitions released by aircraft.  Though missile strikes will continue more sporadically against critical targets as they emerge, artillery and gravity bombs will increasingly do most of the damage, especially once air defenses are deemed sufficiently suppressed.

Belarus stabs Ukraine in back with thrust aimed at Kyiv

The deployment of 30,000 Russian troops to Belarus in January under the false pretext of a routine exercise is bearing its expected, terrible fruit: both Russian and Belarussian troops have advanced south towards the capital of Kyiv, overrunning the Chernobyl exclusion zone along the way. Moscow claims they have encountered little resistance so far. This thrust appears to be forming a pincer attack to encircle Kyiv.

While Belarus’s role in hosting the troops made Putin’s hold on its dictator Lukashenko clear, the actual participation of Belarussian forces in attacks on the border demonstrates how completely Minsk has become an appendage of Russian military power.

Ukrainian forces claim to have downed seven Russian aircraft, including at least one Su-24 bomber. So far, the author has only seen photographic proof of destroyed helicopters, however.

Having devoted much of its first strike to suppressing Ukrainian air defenses, Russia now claims to have “destroyed” them.

I profiled means Russia might use for Suppression of Enemy Air Defenses (SEAD) in an article in January. Since hostilities have commenced. Images reveal damage or destruction of at least three fixed air defense radars, as well as two of Ukraine’s newer-generation mobile L220 radars. Missile debris shows Russia has used its Kh-31P anti-radiation missile.

It’s still far from clear that Ukraine’s more mobile air defense radars and longer-range S-300P and Buk missiles are entirely destroyed yet, though they are surely engaged in a desperate fight for survival.

But even if Russia’s initial strikes really did knock those out, Ukraine’s numerous short-range air defense systems, which include Stinger missiles recently delivered from the Baltics, will remain. These already appear to be causing helicopter losses despite extensive use of heat-decoy flares.

As Russia has a limited inventory of precision weapons that can be used accurately from high altitude, its warplanes will eventually have to assume risks diving into the short-range air defense envelope to accurately strike ground targets.

It also appears likely (but not confirmed) that Russia’s initial bombardment destroyed most of the Ukrainian Air Force’s roughly 100 combat jets and roughly two dozen TB2 Bayraktar combat drones on the ground. Video does however show the UAF has flown sorties, though the author isn’t aware of any confirmed air-to-air engagement or Bayraktar strike footage so far.

One video billed as depicting an aerial engagement in fact shows two UAF MiG-29s in the air.

#Ukraine 🇺🇦: somewhere near #Kyiv a Ukrainian MiG-29 (low-flying) is taking on a Russian Su-35. pic.twitter.com/qpdJo12uzV

The international cargo airport at Hostomel (or Gostomel), on the western outskirt of Kyiv, was heavily struck by Russian missiles in the initial bombardment. Then Russian paratroopers launched a helicopter-borne air assault, depositing troops in Mi-8 helicopters escorted by Ka-52 attack helicopters.

This was a risky operation as helicopters remain quite vulnerable to short-range air defenses. Indeed, at least two Ka-52s appear to have been downed near Hostomel.

However, the paratroopers reportedly secured the airport, which may now be converted into a logistical hub to land supplies and more airborne. Landing cargo aircraft there could still be risky, though, should Ukrainian air defense forces remain active in the area.

Kharkiv and Mariupol—Bombarded but Defiant

Kharkiv, Ukraine’s second-largest city is situated just 15 miles south of the border with Russia. During the preceding buildup, large Russian forces including armored units of the elite 1st Guards Tank Army massed in the city of Belgorod. In the opening hours of the war, a massive barrage of artillery rockets could be seen launching from Belgorod to come plummeting down on targets around Kharkiv.

But while Russian forces have advanced over the border towards Kharkiv, they reportedly have allegedly been stymied by effective Ukrainian resistance.

80 miles northwest of Kharkiv, though, Russian forces reportedly seized the road hub city of Sumy (population around 260,000), which can used as an additional corridor with which to advance towards Kyiv. However, Russian vehicle columns allegedly suffer substantial losses to U.S.-supplied Javelin missiles.

Far to the south, the long-besieged port of Mariupol on the Sea of Azov has come under renewed attack. However, the defenses at Mariupol reportedly held against initial Russian attacks, with at least two Russian soldiers captured.

Unfortunately, Russian advances to the west appear certain to cut supply lines to both of these cities.

Troops from Russia’s 22nd Army Corps in Crimea, heavily reinforced by other armies, have broken through Ukrainian defenses along at least two axes and advanced dozens of miles north to reportedly capture the major Ukrainian city of Kherson (population 280,000), which lies on the Dnieper River. Russian forces are also reportedly advancing eastward in attempt to seize another Dnieper River bridge at Nova Kakhovka.

This is a heavy blow considering how an attack from this axis was relatively predictable and the terrain seemed defensible. Combined with Russian troops advancing south in the area around Kyiv, this could set the stage for Russian forces to cut off supply lines to all of Ukraine east of the Dnieper.

Waiting in the wings

Despite attacking Ukraine on every possible front, Russia has yet to deploy all of the forces it has amassed. Additional VDV airborne troops remain on standby for air landing operations, which could be delivered by helicopter, parachute, or by landing directly onto the runways of newly captured or undefended airports. It also has heavily reinforced naval infantry brigades in amphibious tank-landing ships in the Black Sea and Sea of Azov that has yet to be put into action.

Whether out of shock or possibly according to a defensive strategy, Ukrainian forces do not appear to have significantly impeded Russian mechanized forces rapidly advancing across open terrain towards Kyiv and Kherson. Likely, Ukrainian forces will have the most success combatting Russian troops in cities, where concealment is abundant, reducing the effectiveness of Russian airpower, surveillance assets, and ‘non-contact’ warfare tactics.

Moscow surely hopes to compel Kyiv’s surrender without having to storm particularly Kharkiv and Kyiv one block at a time. If Ukraine’s military insists on an urban fight, though, it could inflict heavy losses on Russia, but at the cost of massive urban destruction and loss of civilian life as occurred in Aleppo, Grozny (Chechnya) and Sarajevo.