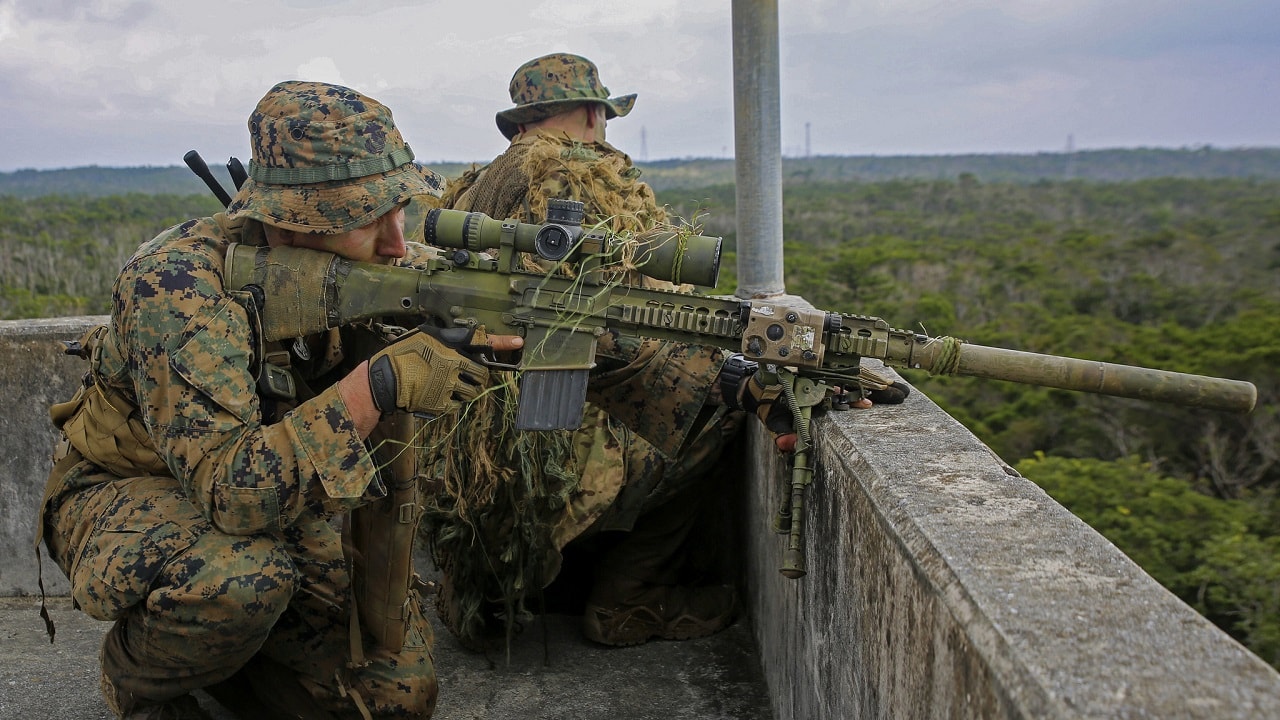 Sergeant Alexander M. Tryon scans the surrounding area for enemy forces during a vertical assault Dec. 10 at Combat Town. After acquiring a strong foothold within the town, the Marines cleared all of the buildings and searched for simulated high-value individuals. Tryon, from Cortland, Ohio, is a scout sniper with Weapons Company, Battalion Landing Team 2nd Battalion, 4th Marines, 31st Marine Expeditionary Unit.

The US Marines are getting ready for the unthinkable: war with China – As the world is watching the situation in Ukraine with bated breath, thousands of U.S. Marines teamed up with a US Navy carrier strike group in one of the largest shows of force in the Indo-Pacific.

For the past week, 7,500 Marines from II Marine Expeditionary Force simulated the defense of an island from a Chinese military invasion. The USS Abraham Lincoln Carrier Strike Group supported the Marines with integrated naval and air power.

The exercise was designed to hone distributed operations in the jungle and maritime warfare environments. As the Indo-Pacific area of operations is largely made up of these two environments, the ability to operate in them seamlessly and with the same effectiveness in other geographical areas will be crucial, especially in the event of an incident or conflict with China.

“This exercise showcases the teamwork and integration between the Navy and Marine Corps in the Indo-Pacific. It allows our multi-domain forces to rehearse combat missions to bolster our collective capability and readiness. Our continued participation in these joint and combined exercises demonstrates our commitment to our allies and partners in the region to protect our collective interests, enhance our security, and safeguard our shared values,” Rear Admiral J. T. Anderson, the commanding officer of Carrier Strike Group 3, said in a press release.

“Each mission focused on the refinement of new tactics, techniques, procedures, and technologies such as rapid dispersion and utilization of a digitally interoperable kill chain,” Colonel Cristopher Murray, the commanding officer of Marine Aircraft Group 36, stated.

The Marines on the ground conducted a 700-mile insertion to the simulated battlefield supported by MV-22B Osprey and CH-53E Super Stallion helicopters.

U.S. and allied forces in the Indo-Pacific have the disadvantage of being on the defensive. Were a war to break out in the region, it would most likely be caused by a Chinese invasion of Taiwan. Beijing has repeatedly reiterated its goal of reunification with Taipei. And the Chinese Communist Party has indicated that this will happen preferably by peaceful means, but if necessary, by force.

As a result, the U.S. military and its allies need to be able to react quickly to a Chinese attack and reinforce islands. So, training events such as Jungle Warfare Exercise 22 are of vital importance.

In this article:China, Indo-Pacific, Jungle Warfare Exercise 22, Taiwan, US Marines, US Navy