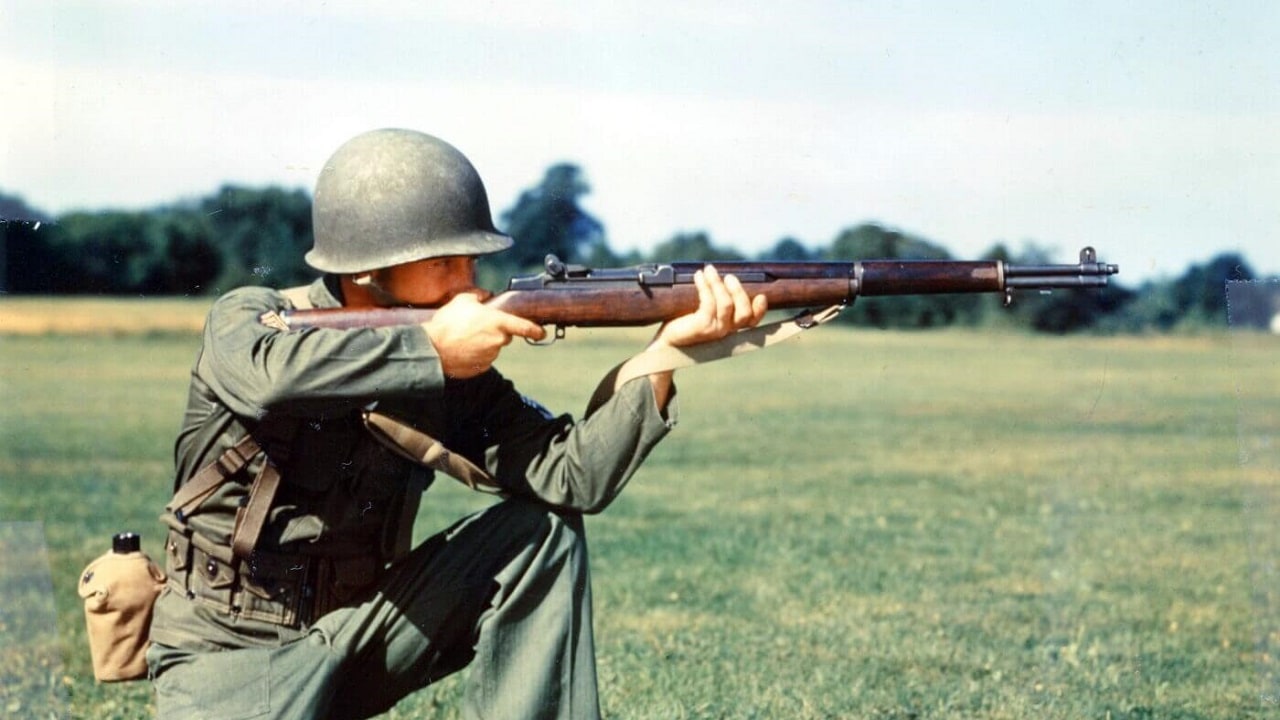 The M1 Garand: A History – Throughout World War II, the standard-issue service rifles used by the warring nations—the German Kar 98k, British Lee-Enfield, Soviet Mosin-Nagant 91/30, and Japanese Ariska Types 38 and 99—were fundamentally similar: bolt-action rifles, most with roots in the 1890s or 1900s, that required the shooter to unlock and yank back a heavy bolt and refocus their aim after every shot. That meant that when a rifleman missed a fleeting target or an enemy charging in at close quarters, they often wouldn’t get a second shot.

But there was one big exception: the U.S. military adopted the semi-automatic M1 Garand rifle as its standard service weapon. In a pinch, a Garand-armed GI could fire as rapidly as he could pull the trigger—a potent advantage firing on the move and at medium-to-short range.

But neither had the vast and un-assailed economic base of the U.S., which issued over 10 million semi-automatic rifles and carbines. That includes over 4 million Garand rifles built by Springfield Armoy and Winchester through 1945, at an average unit price of $85 (roughly $1,400 in 2022 USD)—roughly twice that of its bolt-action predecessor.

The M1: A Rifle Decades in the Making

The .30 caliber M1 Rifle was the lifetime project of French-Canadian immigrant John (or rather Jean) Cantius Garand, who learned English working at a Connecticut steel mill at the age of 12. A gifted tinkerer and hobby shooter, Garand worked his way into employment with the federally run Springfield Armory in 1916.

In 1919 he devised the first of a series of prototype self-loading rifles culminating in the .276 caliber (7 millimeter) T3E2 prototype which defeated the similar Pedersen T1 rifle an Army competition in 1931.

The redesign, subsequent testing and ironing out of defects delayed the M1’s adoption for nearly a decade. Though officially entered into service in 1936, the M1 arguably didn’t truly begin mass production until 1940. Ironically, ponderous development had a positive outcome: once used in combat the Garand proved unusually reliable for a complex new weapon.

The M1 was loaded by inserting an en bloc clip with eight rounds into the top of its receiver. Upon firing a round, a gas trap captured gasses released by the bullet after exiting the barrel channeling them back to push back a rod. This actuated a rotating bolt, ejecting the spent cartridge and chambering a new one. Upon firing the last round, this action ejected the clip with a distinctive metallic ping.

In 1940, the Garand’s gas trap system was replaced with a less complex and more reliable gas port which siphoned the gasses before the bullet exited the barrel. The Army attempted to upgrade the 50,000 early production ‘gas trap’ Garands to the new system, but some remained in use early in World War II, particularly in the Philippines.

The M1 Garand was issued to riflemen along with a standard loadout of 10 clips (80 rounds), a brown leather or olive canvas double strap, and a bayonet which could be fitted over the barrel. Most infantry squads also received two or three M7 rifle grenade launchers for fitting over bayonet lug. A special blank cartridge fired by the Garand could propel a rifle-grenade out 300 meters, often fired in an arc braced on the ground with a recoil-dampening rubber boot fitted on the stock.

The M7 could launch regular M2 ‘pineapple’ fragmentation grenades, smoke grenades, or 48-millimeter M9 anti-tank grenades with shaped-charge warheads. The M9’s two inches of armor penetration fell short of the stopping power needed against most late-World War II tanks (except sometimes against weaker side or rear armor) but remained effective against lighter armored vehicles and fortifications.

In Patton’s Words: “The Greatest Battle Implement Ever Designed”

U.S. Army units fielded a mix of Garands and older Springfield rifles in early battles in the Philippines and the Operation Torch landing in North Africa. It wasn’t until 1943 that most Marine Corps units began converting to M1s. However, elite units like the Army Rangers at Dieppe and Marine Raiders who stormed Makin Island often fielded Garands earlier.

Semi-automatic fire allowed U.S. riflemen to rattle off twice or more the practical firing rate of their German and Japanese counterparts at medium and short range. The M1 was also no slouch at long range thanks to a muzzle velocity of 2,800 feet per second, around 12% higher than the Kar 98k, imparting accuracy and good penetration of foliage and other forms of cover.

But at the squad level, the Garand’s firepower was mitigated by the lower output of the squad’s supporting Browning Automatic Rifle (BAR) compared to German MG.34 or MG.42 machine guns.

The 20-pound BAR’s 20-round magazine and lack of quick-change barrel meant it couldn’t provide continuous suppressing fire. This led to the number of BAR-gunners in U.S. squads increasing from one to two or even three late in the war.

Overall, the Garand/BAR combination was meant to facilitate offensive fire and maneuver tactics in which BARs tied down enemies while riflemen wheeled around the flank for the kill. German squads by contrast were built around supporting the extreme lethality and suppressive capability of the MG.42.

One controversial bit of Garand lore concerns claims that the pinging sound produced from the ejecting magazine would alert enemy soldiers a GI had expended their clip. U.S. soldiers did reportedly worry about this and some even took to tossing empty clips to lure out foes. However, there doesn’t appear to be evidence Axis soldiers tried to exploit the ping as a tactic—unsurprising, given the immense din of combat.

The Garand’s real chief downside was that at 9.5 pounds (or 11 fully outfitted) and 43.7” long, it was heavier than and roughly the same awkward length as bolt-action rifles, which typically clocked in around 8.5 pounds.

Due to the bulk, support troops instead received 5-pound semi-automatic M1 Carbines (no relation to the Garand), a staggering 6.1 million of which were built. The carbine was also adopted by frontline infantry seeking more compact weapons than the Garand, though carbine rounds had one-third the energy, and thus inferior range and penetration.

U.S. World War II snipers mostly used M1903A4 bolt-action rifles, but M1C sniper rifles (7,971 built) did see limited use in the closing days of World War II. These had an M73 2.2x magnification scope offset to one side so as not to obstruct the receiver, a leather cheek pad on the stock, and often a conical M2 flash suppressor on the barrel.

The Pentagon did test two compact Garand variants with an 18” (down from 24”) barrel for use by paratroopers and jungle-fighting Marines: the T26, and the folding-stock M1E5, but both exhibited poor performance in trials. Garand also developed a prototype called the T20E2 which could fire 20-round BAR magazines automatically.

All of these Garand variants never saw action due to the termination of hostilities.

The Garand and its sniper variant remained the standard U.S. service rifle during the Korean War, where it proved especially resilient to cold weather extremes. In a report Army Historian S.L.A. Marshall praised the rifle for its durability, accuracy, and consistent performance, claiming “Of all weapons carried by the infantry, the M1 appeared to be least sensitive to heavy frost, extreme cold, and icing.”

The M1 was also widely exported to most of Washington’s Cold War allies in Europe, Latin America, and Asia—seeing much combat use by South Korean and South Vietnamese troops—and even license-built by Beretta in Italy.  To meet demand, between 1951 and 1957, Springfield Armory, International Harvester, and Harrington & Richards Company produced an additional 1.4 million M1s.

However, bruising nighttime engagements against waves of Chinese and North Korean troops liberally equipped with PPsH submachine guns created the impetus to seek weapons with even greater firepower. This encouraged the M1’s ultimate evolution, the M14: an automatic fire-capable Garand using NATO 7.62mm rounds from 20-round box magazines.

The M1 wasn’t fully replaced by M14s in U.S. military active-duty units until 1965, but it lingered on in many U.S.-supplied militaries for decades. To this day, some M1s remain in use with honor guards and the odd insurgent.

The Garand was an early demonstration of how the U.S. industrial capacity could be leveraged to provide qualitative advantages, not just quantitative. That allowed U.S. soldiers in World War II to field a markedly superior service rifle that for its time artfully balanced rapid-fire capability with long-distance hitting power.