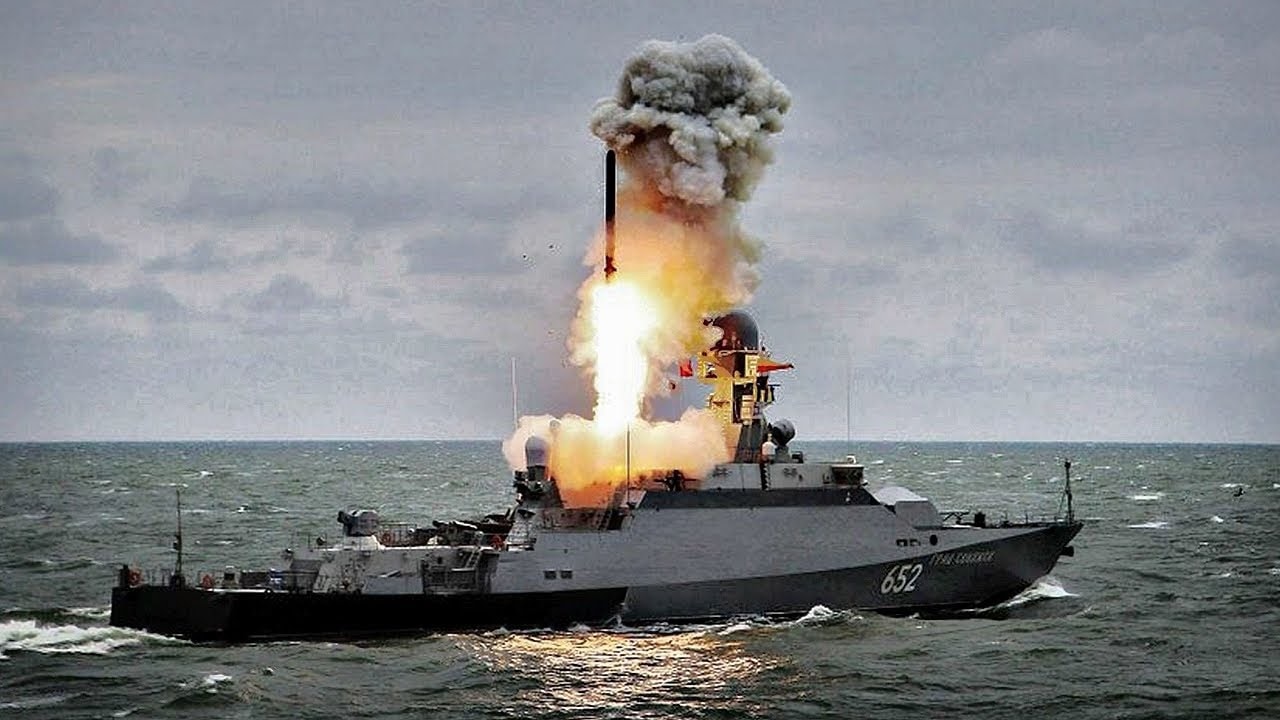 Russia Strikes Back With Kalibr Cruise Missiles – Russian sea-launched Kalibr cruise missiles are making Ukraine pay. The Kalibr, which is the Russian version of the American mainstay Tomahawk, is working in tandem with the Kinzhal hypersonic missile, to bomb key military targets in Ukraine. Both missiles hit a Ukrainian fuel storage center in Kostiantynivka near the Black Sea port of Mykolaiv on March 20. The Kalibr, launched from Russian ships and submarines in the Black and Caspian Seas, is difficult for Ukrainian defenses to stop. Flying low and fast, the Kalibr can evade enemy radar systems and deliver an accurate and devastating payload.

Russian Defense Ministry spokesman Major General Igor Konashenkov said on March 21 that Kalibrs had also struck tank repair and maintenance targets in Nizhyn, Chernihiv region in northern Ukraine on March 19 and 20th. These were fired from Russian ships in the Black Sea signifying that Russia is focused more on stand-off missiles that can be launched from vessels outside the range of Ukrainian counter-fire.

The ship and submarine-launched Kalibr cruise missile skims just 10 to 20-feet over the sea and flies at MACH 3 on its terminal phase. It is radar-guided by GPS and cameras. Ukrainian air defenses struggle to keep up as the Kalibr is also maneuverable in flight.

The Kalibr has a range of 930 to 1,550 miles and uses a high-explosive warhead that weighs 990 pounds. The missile is 20-feet long. It’s relatively new having entered service in 2015 when they were used in Syria against ISIS and other rebel targets.

Russians Sending a Message to the U.S. and NATO

With the employment of the Kalibr, the Russians are showing the United States and NATO that they can deliver an accurate punch at long-range targets. The submarine-launched Kalibr could hit the eastern seaboard of the United States.

Northern Command General William Gortney warned Congress about the Russian use of Kalibrs before the Russo-Ukraine war that “They’re messaging us that they have this capability.”

More Ships Are Getting Kalibrs

The Russians deploy the Kalibr on guided-missile frigates and smaller corvettes. Early in the war, Russia fired at least one Kalibr at a government building in Freedom Square in Kharkiv. The cruise missile missed the structure but landed in a residential section of the city and killed 11 people including three children.

Purported to Be Accurate

Kalibrs are usually more accurate than that attack. They use a combination of satellite navigation, plus inertial and terminal radar guidance. The cruise missiles can land within 10-feet of an intended target on average.

How Many Kalibrs Are Left?

The Ukrainians hoped that the Russians had run out of Kalibrs in the first weeks of the war, but this last launch shows that Vladimir Putin’s forces still have the sea-launched cruise missiles in stock.

Ukraine’s Ministry of Defense said on March 17, “Since the enemy used almost the entire set of Kalibr sea-based cruise missiles and Iskander tactical missile systems during the first 20 days of the operation, they continue to launch missile and bomb strikes on infrastructure and housing quarters of large cities, using indiscriminate weapons.”

Russia will likely continue their stand-off missiles attacks and the Kalibr will remain a significant weapon in their arsenal. The Black Sea naval fleet can be re-supplied in Crimea, so it will be important for the Russian defense industrial base to produce as many as possible and then transport them to Crimea for re-supply to the navy. The one-two punch from Kalibr and Kinzhal hypersonic missiles is a strong move to show the world that Russia’s supply of ultra-fast moving missiles is the Russian way of war.