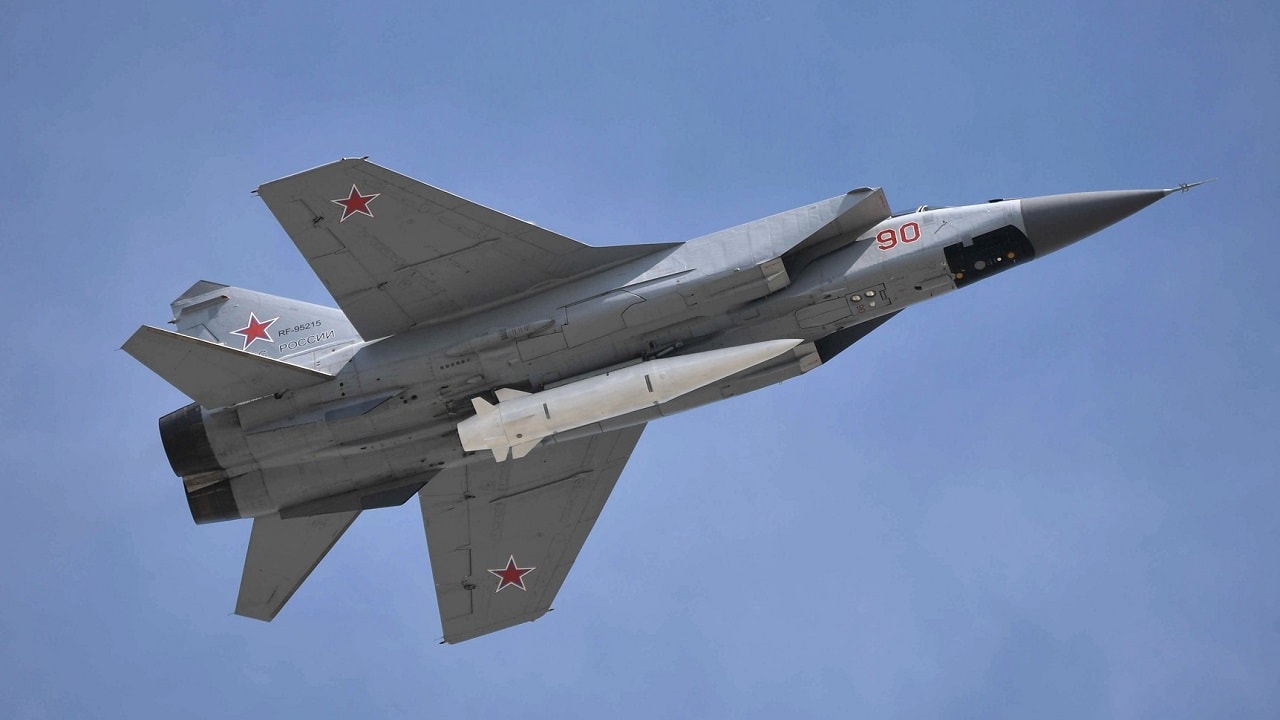 The Russian Kinzhal “Dagger” air-launched ballistic missile can knife through NATO or Ukrainian defenses and take out high-value targets. The Kinzhal has been spotted on a Russian fighter landing in Kaliningrad in February before the Ukrainian invasion began. While not technically a hypersonic missile, since it doesn’t use boost-glide technology, the Kinzhal has a speed of MACH 10. It’s long-range and nuclear-capable. Vladimir Putin said the missile is “invincible.” This missile could be a deterrent to keep the Americans and NATO from executing a no-fly zone over Ukraine or from conducting a military intervention from Poland.

Russian Have Strategic Flexibility With the Kinzhal

The Russians have many strategic and tactical choices to make with the Kinzhal and they are all favorable for Moscow. It could remain in the Russian enclave of Kaliningrad to target the Baltics or even western European capitals. It can be launched from a MiG-31K Foxhound warplane flying from Russia or Belarus to attack Ukraine. There are reportedly six Foxhounds that are modified to carry it out of a base in Southwest Russia. It can also be fired from a Tu-22M3 Backfire bomber from Russian air space.

Kinzhal: It Can Do Damage from Kaliningrad

The Kaliningrad basing option looks like the likely place for the Kinzhal location at this point. According to Carl Bildt, co-chair of the European Council on Foreign Relations, in a tweet in February, “It’s certainly meant to send a signal when Russia deploys its most advanced strike weapon Kinzhal forward to Kaliningrad. There are only a few of them, and half of them are now said to be in Kaliningrad.”

The Kinzhal Missile Is Dual-Use

The Kinzhal is 26 feet long and has a range of 1,240 miles. It can be compared to an air-launched Iskander missile. Flying from the Backfire, the missile would have a 1,800-mile range. It comes equipped with a 1,100-pound conventional warhead or a 500 kiloton nuclear warhead, which is “33 times the yield of the Fat Man bomb dropped on Hiroshima,” according to Sebastien Roblin writing in Forbes.

Also, due to its maneuverability and unpredictable flight trajectory, it is considered to have the ability to outfly European missile defenders such as THAAD (Terminal High Altitude Area Defense) or the Aegis Ashore anti-missile system. The radars of those systems could have difficulty tracking its flight.

Since the Kinzhal is carried into battle it has an extended range. There might even be an air-to-sea capability in the future that could threaten U.S. and NATO aircraft carriers. The nuclear-option of the Kinzhal is enough to keep NATO worried. Since it can likely evade existing air defense systems in Europe. This is why Putin is so excited about the Kinzhal as a next-generation weapon.

Deterrence for NATO Not to Escalate

There are no reports yet of the Kinzhal being used in Ukraine, but there is potential to do so if NATO escalated the fight with a no-fly zone or other intervention. Putin likely considers it a regional weapon to be used in larger-scale combat that would include Ukraine and the Baltics or Poland. So again, the Russians have an array of choices with the Kinzhal, and this strategic versatility is what makes the missile so dangerous.