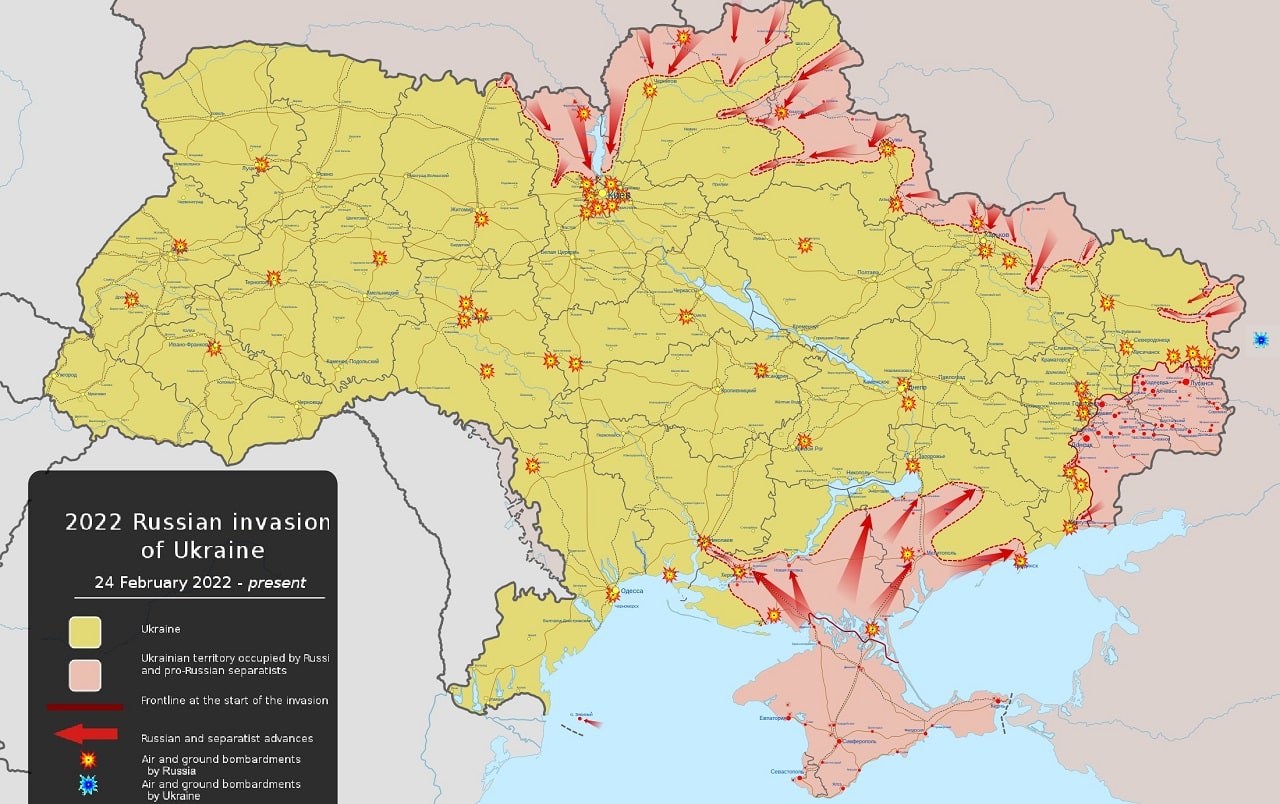 Map of the war in Ukraine. Image Credit: Creative Commons.

The world is rallying around Ukraine in the war. Indeed, it is remarkable just how much the Ukrainian side has dominated the battle for global public opinion. Even Russian President Vladimir Putin, seemingly trapped in an autocrat’s information bubble, appears to realize that now. Because the war is so overtly aggressive – tanks rolling across borders in Europe – the media’s analogies to Adolf Hitler’s aggressive war in Europe were probably inevitable.

This is understandable and, should Putin invade other states after Ukraine, may even be accurate. But we should be cautious about using the ‘Munich Analogy,’ about the Munich conference in 1938, too promiscuously. There British Prime Minister Neville Chamberlain notoriously accepted the cession of the Sudetenland of Czechoslovakia to Nazi Germany. He declared ‘peace in our time,’ only to see Hitler attack Poland the following year. Ever since Chamberlain has become a watchword for weakness and appeasement.

Because of the enormous trauma of World War II and popular fascination with the Nazis, the Munich Analogy has entered the parlance and is regularly used to frame crises faced by the West – in Vietnam, Georgia, Afghanistan, and now Ukraine. But we should be cautious of its overuse because the assumptions, about enemy leaders, built into that analogy are fairly rare and the policy course, escalation, which it recommends can be hazardous

Every Western Challenger is Not Hitler

The most obvious problem with the Munich Analogy is that most Western opponents are not unlimited revisionists or imperialists like Hitler. Leaders like that – with nearly unlimited aims and a powerful military machine to pursue them – are quite rare in history. Conquerors like Napoleon, Genghis Khan, or Alexander the Great are fearsome and widely discussed, but most leaders in history, even military imperialists, tend to have more limited aims than those men, and they are less willing to engage in the extremes of violence and extermination we associate with leaders like Hitler or Stalin.

In Vietnam, for example, Ho Chi Minh in the North and the National Liberation Front in the South clearly saw themselves as national independence leaders, rather than crusading revisionists. Unified Vietnam did have some regional aims. It sought a measure of dominance in Laos and Cambodia. But not much more than that. Similarly, in Afghanistan last year, it was quite clear than an American retreat did not signal the end of the world order or liberal international power, that Taliban had very limited goals – namely to win the Afghan civil war – and were hostile al Al Qaeda’s return as it might bring the West back in.

Putin, so far in Ukraine, looks like he wanted a blitzkrieg, to put a Russian stooge in charge, but also allow him to withdraw quickly before international condemnation coalesced.

The Munich analogy also treats deterrence as monolithically interconnected. Any challenge anywhere is connected to commitments everywhere else. So if a domino – Vietnam, Afghanistan – falls in one place, aggressors will roll onto the next – Ukraine or Taiwan. Aggression pays and is self-sustaining.

This frightening image of falling dominoes is not actually historically common though, thankfully. It was in the 1930s, but it was not, for example, in the Cold War. Aggressors do not always read one victory in place to mean they can automatically push on other ‘dominoes.’ Deterrence is structured by local and historical factors; some commitments are much more credible than others. So even though the US lost in Vietnam, North Korea or East Germany did not attack South Korea or West Germany, just as the US did not attack Cuba or Nicaragua after the Soviet defeat in Afghanistan.

In Ukraine that means that Western reticence to fight directly against the Russians in Ukraine does not automatically mean that Putin will test NATO’s collective security commitment or that China will attack Taiwan.

The policy deduction from Munich is that we should fight early. Better to fight today when the aggressor is weaker than tomorrow when he is stronger. But if the aggressor has limited goals, if he is not Hitler or Napoleon, then charging in to fight early can make things worse. The United States escalated in this manner in Vietnam and in the War on Terror. Conflicts which were small ballooned into massive US commitments and ‘forever war’ quagmires. Indeed, that is the very threat Putin himself now faces, and were the NATO to fight directly, it would provide Putin with exactly the pretext he wants to justify his invasion.

Other analogies and frames are available, and we should use them to widen our thinking about our options. The Spanish civil war saw foreign volunteers and weapons flow to Western-aligned local forces in a semi-proxy war, and that is already happening in Ukraine. The Islamist insurgency in Afghanistan against the Red Army in the 1980s saw a Russian/Soviet incursion – also intended to be a blitzkrieg to install a quisling leadership followed by a quick withdraw – bog down into an unwinnable counterinsurgency against military inferior but strongly committed partisans. That is also reminiscent of the current war.

These and other historical exemplars recognize the danger Putin represents but counsel caution, which we should well exercise against a nuclear opponent of Russia’s scale.