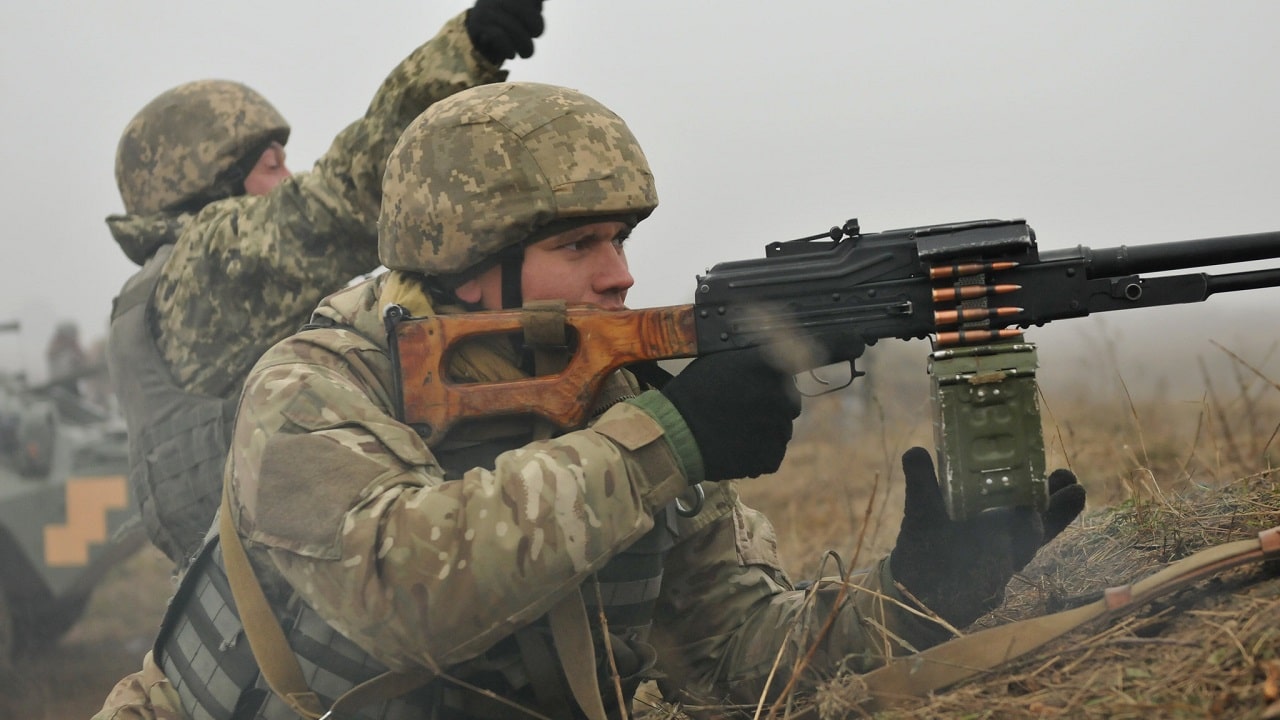 A Ukrainian Soldier assigned to 1st Battalion, 80th Airmobile Brigade prepares to shoot an AK-47 during a live-fire training exercise, Nov. 12, at the International Peacekeeping and Security Center. Soldiers assigned to 6th Squadron, 8th Cavalry Regiment, 2nd Infantry Brigade Combat Team, 3rd Infantry Division is deployed in support of the Joint Multinational Training Group-Ukraine. JMTG-U is focused on direct training of Ukrainian ground forces in the near term while helping to build an enduring and sustainable training capacity for the future. (Army photo by Staff Sgt. Elizabeth Tarr)

Having sown the wind in Ukraine, Russia is reaping the whirlwind.

Its aggression is criminal and unprovoked. The US and its allies contributed to the conflict. But the decision for war—which already is resulting in significant death and destruction—was Russian President Vladimir Putin’s.

If there is one lesson of Moscow’s brutal and unjustified invasion, it is that aggressors should choose their victims carefully. As the Balkan Serbs learned decades ago, it is best not to attack people in Europe, which guarantees heavy media attention in Western capitals. This may be the first conflict in which the public is driving sanctions and boycotts, in this case against all things Russian, including individuals who had nothing to do with their government’s decision for war.

In contrast, Washington has been bombing and invading nations in the Middle East, North Africa, and Central Asia for years. Despite wrecking entire states and ravaging their peoples, US policymakers have never been held accountable. The total number of victims in these wars—killed, wounded, displaced—the number in the millions. Washington typically tires of fighting and either downgrades its role or simply leaves, as in Afghanistan, without even apologizing. But no American has ever faced economic sanctions or been charged with war crimes.

Today Ukrainians and to a lesser degree, Russians are suffering. The long-term consequences for Americans and Europeans will be serious as well. No one knows how the fighting will end, but Washington should begin planning for the aftermath.

The Ukrainian people’s desperate fight has created hope that they can cause enough damage and delay to force Moscow to downgrade its objectives, and perhaps even withdraw entirely. However, though Russia’s campaign so far appears to be FUBAR, Moscow’s significant military advantages still make victory likely.

In that case, the best outcome would be a ceasefire and negotiated peace. Halt the killing and reach an agreement today rather than later. Leave Ukraine’s politics and economics free but accept neutralization in return for Russian withdrawal. However, the longer and most costly the fighting, the greater the likely intransigence of both sides.

Without an agreement, Moscow, given its advantages in numbers, equipment, and firepower, seems most likely to take the cities and win nominal control over most of the country, to be followed by steadily increasing irregular resistance. Such an endless war would ravage Ukraine and bleed Russia, with disastrous consequences for both nations.

Most dangerous would be NATO military involvement, risking general war. Whether intentional, triggered by the allied declaration of a “no-fly zone” or Russian attacks on European resupply efforts or accidental, growing out of unintended cross-border strikes, the result could be conventional escalation up to the nuclear precipice.

Recognizing the horror for Ukraine and danger for America, Washington should continue pressing Moscow to halt the fighting and both sides to negotiate an end to the conflict. Ending the killing and destruction obviously is an urgent priority. Moreover, the longer and deadlier the combat, the greater the gulf between the combatants, and the less likely either will compromise, even if that would be the best solution.

On Monday Kremlin spokesman Dmitry Peskov said that if Moscow’s demands are met, the battle “will stop in a moment.” On what terms, however? Putin appears set on Russian domination, despite the high prospective price. There is no indication that Moscow’s faltering campaign has yet chastened the Kremlin, convincing it of the need for compromise.

The allies should encourage Putin to halt military operations by offering to suspend weapons shipments to Kyiv and enforcement of sanctions on Russia if the latter agrees to a ceasefire and negotiation. Washington and European governments should warn that if the war continues, anti-Russian measures will last even longer.

While backing Ukraine, the US and Europeans should ensure that Kyiv understands the risks of continued war: if defeated and occupied, it can expect no outside rescue mission. Its best chance for survival as a free and independent nation is to reach an agreement while still largely unoccupied.

Washington’s chief responsibility today is not to save Ukraine but to prevent the US or allied involvement and possible war, especially nuclear war, with Russia. Washington and Moscow avoided such a cataclysm during the Cold War when the stakes were global and civilizational. Moscow’s brutal attack on Ukraine is a moral outrage but does not pose the same level of threat as the Soviet Union. There is no excuse for risking their societies and the planet’s survival today.

Thus, the US and allied nations should do everything possible to avoid a clash. That means staying out of the fight in Ukraine. Enforcement of a no-fly zone—shooting down Russian aircraft and attacking Russian air defenses—would be an act of war. Moscow would be fully entitled to retaliate. And likely would.

Support short of war should be limited and camouflaged. Transferring aircraft from NATO members, such as Poland, also would be a plane too far, just short of direct involvement. Even if the transatlantic alliance felt sure of winning any conflict that might erupt, Russia’s possible reliance on tactical nuclear weapons would void any such judgment. Moscow’s presumed willingness to “escalate to deescalate” could end terribly.

The West also has been openly transferring weapons to Ukraine. In the past such efforts have been accepted within the “rules of the game” by Washington and Moscow, at least when conducted covertly. US aid to the Mujahedeen killed thousands of Soviet soldiers, but the US government did not publicly flaunt its role. Russia’s tolerance for such efforts in Ukraine would likely diminish in the face of a persistent and deadly insurgency. Imagine how Washington would have reacted had the Putin government openly transferred weapons to the Taliban, al-Qaeda in Iraq, or ISIS. Deniability has a long and storied role in foreign policy. The allies should exercise greater caution.

Finally, Washington should prepare for the endgame. The world is headed toward another Cold War, with a new Iron Curtain likely to rise wherever the reach of Russian troops ends.

Facing domestic unhappiness over the human cost of the war, deceptive cover-up, and impact of Western sanctions, the Putin regime likely will become even more repressive. Observers indicate that the situation already approaches martial law. Moreover, diplomatic retreats, economic penalties, and cultural bans have dramatically deepened Russia’s isolation. Some countries would make the West’s economic war essentially permanent. Opined Poland’s ambassador to the US, Marek Magierowski: “We have to be ready and determined to uphold the sanctions. Perhaps even for a decade or for 15 years or for 20 years, in order to see the real effects.”

Although Russia is a much-reduced version of the Soviet Union, significant dangers would remain. It likely would respond to a new Cold War by reinforcing its military. Most notably, what has been largely a political struggle would turn into an enduring military confrontation.

If so, Russia might become something akin to a giant North Korea, only better developed and with many more nuclear weapons. With less at stake in the international system and greater resentment toward adversaries turned enemies, Moscow would be more dangerous than today. Frontline European states would be even more insistent on American military protection. Violent competition would intensify in battleground areas elsewhere, such as Syria and Africa.

Despite the understandable desire to punish Russia for its attack on Ukraine, allied governments should not push Moscow into a black hole. The immediate, urgent task is to end the fighting. But once that is done, what should be the relationship between the West and Russia? Although business as usual hardly seems appropriate, a new Cold War is no answer either.

Allied officials should first restore diplomatic contacts, which have suffered through mutual restrictions and expulsions. The US and Russia have poorly understood each other. More diplomats should be on station, involved in host nations, and in dialogue with governments and people. Washington should lead by making more visas available, to encourage contact among individuals and organizations outside of government.

What sanctions as some resolution to the conflict is reached? Penalties against Russian security agencies, Putin, and his cronies should initially be left. So should technology restrictions intended to hinder military research and production. Relaxation in these areas should await a broader improvement in relations.

However, contra Poland’s ambassador, the West should greatly narrow its economic war. Broad restrictions that harm the Russian public should be dropped. The Russian people should not be victimized twice, oppressed by Moscow, and then penalized by Washington. Moreover, the West should encourage the liberal elements of Russian society who have suffered the most from domestic repression and foreign punishment. They would benefit from some return to greater economic opportunities, broader international exposure, better communication technologies, and more.

Civil society also should drop, even before the fighting concludes, today’s burgeoning Russophobia. Putin’s political cronies and business allies warrant all the opprobrium possible. However, targeting any and all Russians—who were allowed to participate in sports, culture, science, and academia worldwide even during the original Cold War—is foolish. Treating tennis players, ice skaters, chess players, opera singers, symphony directors, scholars, academics, researchers, and others as enemies does not help Ukrainians or hurt the Putin government. To the contrary, undifferentiated hostility strengthens the latter’s claim to be defending Russia. So rabid has been the reaction that Russians are now barred even from the Paralympics, as if punishing disabled athletes will help stop Putin’s war.

Far better for people in the West to draw Russians westward, offer them economic and educational opportunities, encourage and empower them in their activities at home, and expose and publicize the Putin regime’s lies and weaknesses. Indeed, many Russians whose global stature is based on their success in the West have criticized Moscow’s aggression. The Putin regime seems likely to respond to the current crisis, whether victory or defeat, by trending toward isolation; the West should push to maintain some level of engagement.

The immediate challenge is to respond to the burgeoning humanitarian crisis and threatening military confrontation. However, when the guns stop firing the West’s relations with Russia will loom even more important. The US and allied governments should begin planning for what follows. Today’s hot war is horrific. Another Cold War could ultimately be even more dangerous.