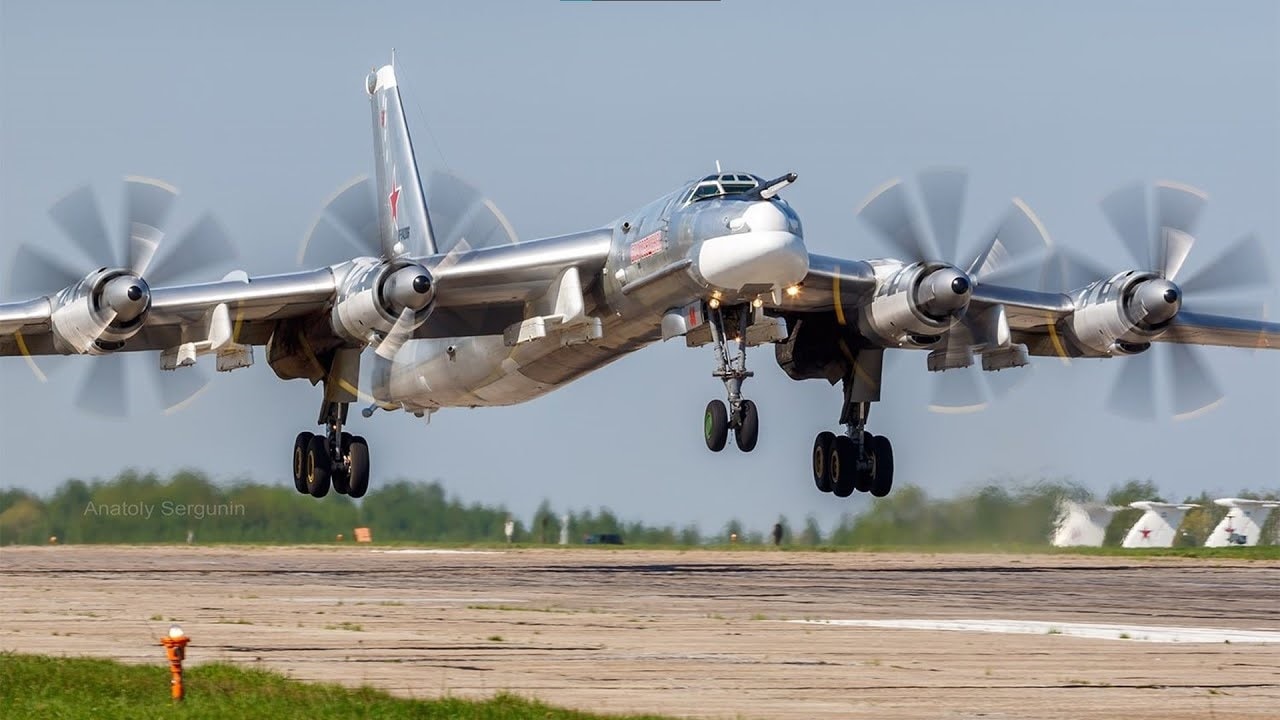 The Tu-95 might just be Russia‘s version of the B-52 bomber: To date, the Kremlin hasn’t deployed its powerful fleet of bombers against targets in Ukraine in any substantive fashion. While the Ukrainian people have already faced untold horrors since Russia launched its unprovoked and unwarranted invasion in February, and Ukraine’s urban centers have been heavily damaged in the fighting, Russia’s bombers still have the potential to level those cities to the ground.

Among the weapon not employed has been the Tupolev Tu-95 (NATO reporting name “Bear”), a large Cold War-era strategic bomber that was first flown in 1952. It is now among the oldest aircraft designs still in service with the Russian military, and the Bear is also the only propeller-powered bomber in service anywhere in the world today. However, despite the age of the platform, it is a highly-capable bomber – and much like the United States Air Force’s B-52 Stratofortress, it has been steadily upgraded and will likely remain in service well into the 2040s or later.

The four-engine propeller plane was developed in the 1950s after Soviet planners had requested a four-engine bomber that could fly five thousand miles and hit targets across the United States. The choice of propeller-driven engines was made due to the fact that jet engines of the time burned through fuel too quickly, and the Soviets lacked the capability to refuel its bombers in flight. The Tu-95 has a range greater than 15,000km (9,300 miles).

Though it may have been a turboprop aircraft, the Tu-95 still featured some notable advancements for the 1950s, including its swept-wing design, which helped ensure that the main wing span passed through the fuselage in front of its bomb bay. It also allowed the aircraft to cruise and fly at greater speeds than straight-wing bombers as the 35-degree angle of the swept-back wings provided improved aerodynamics.

The bomber proved to be a symbol of pride for the Soviet Union and regularly made a presence at European Air Shows.

Interestingly, while the bomber was first flown in 1952, and entered service with the Long-Range Aviation branch of the Soviet Armed Forces four years later, the Bear wasn’t actually used in combat until 2015.

In November 2015, the Tu-95s were employed for the first in long-range airstrikes as part of the Russian military intervention in the Syrian Civil War.

The Soviet Air Force and later the Russian Aerospace Force have upgraded the aircraft significantly – well beyond its original capability to drop unguided bombs. The aircraft, which has been in service for more than 60 years, is notable in that it can cover such great distances while carrying a hefty payload up to 15,000 kg (33,000 pounds). More impressively, the upgraded Tu-95MS, which was introduced in 1981, was integrated to carry new air-to-surface missiles.

A noteworthy advantage of Russia’s upgraded Tu-95MS is that the aircraft isn’t actually as old as the B-52. This is because it was determined that the original Tu-95s that rolled off the assembly line in the 1950s and 1960s weren’t suitable for modernization.

And while the Soviet Union had developed newer jet-powered bombers – including the Tu-160 – it was determined that Bear still had claws, and as a result, the Soviet Union opted to restart production in the 1980s. The Tu-95MS bombers flying today are actually significantly newer than their American counterparts even as the Russian aircraft may seem almost antiquated in comparison. The turboprop engines, which have been updated and are far quieter than the original versions introduced in the 1950s, have also proven to be far easier to maintain than the jet engines used on the B-52 – and which are now being extensively upgraded.

Today, the Tu-95MS is a key element of the air component of Russia’s nuclear triad, and the modernized versions have been upgraded to carry the latest X-101 cruise missiles, which can be retargeted once the bombers are already airborne. In addition to its bomber role, the Tu-95 also serves in a maritime reconnaissance role. Its slower speed allows it to pace targets, while its long range allows it to stay around those targets for hours on end.

In that latter role, the Bear has been regularly deployed on flights over the neutral waters of the Arctic, the North Atlantic, the Black and Baltic Seas, and the Pacific Ocean.

Fortunately, it hasn’t been seen over the skies of Ukraine.