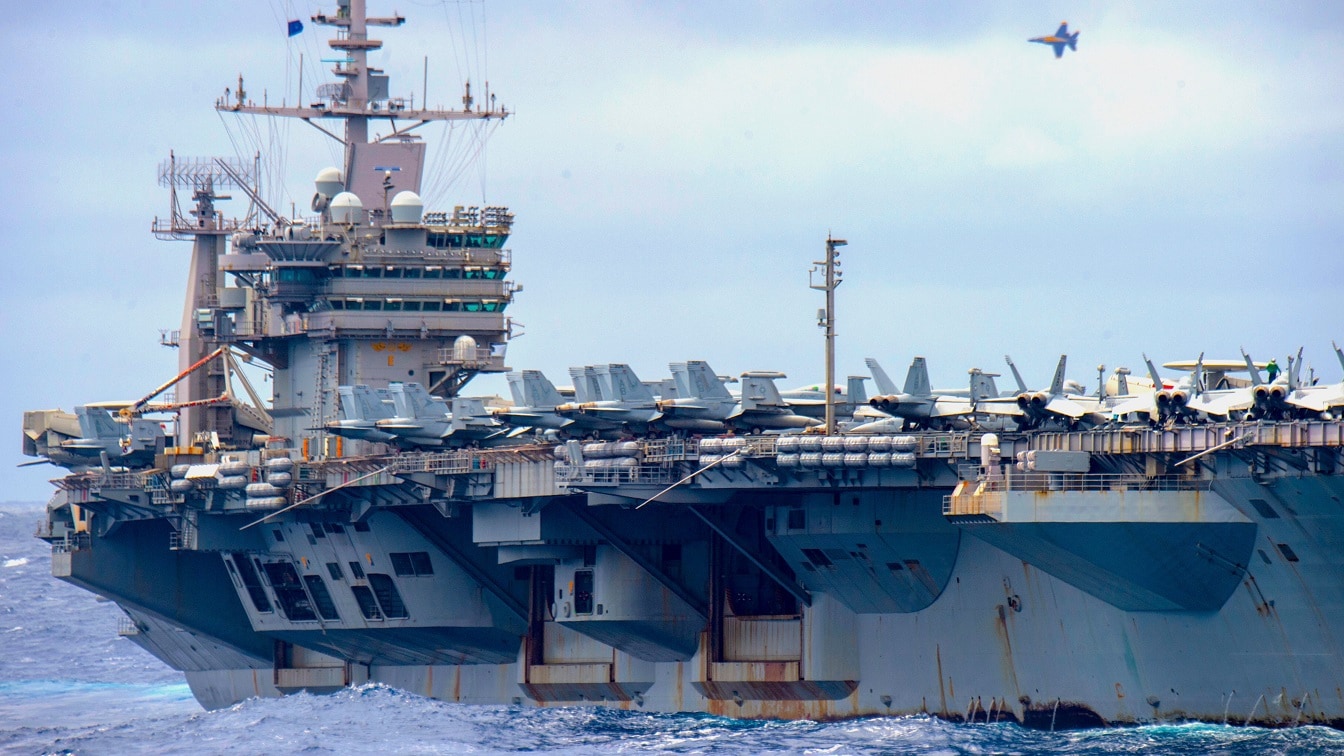 Two theaters or one? The Biden administration seems conflicted. Do Europe and East Asia comprise a single theater for U.S. diplomatic, economic, and martial endeavor? Or are they multiple theaters—implying a hierarchy between them that governs how Washington apportions finite national resources? Kurt Campbell, the National Security Council’s seniormost Asia adviser, first said two, reminding everyone that the United States successfully managed multiple theaters during World War II and the Cold War and can do so again. He later revised his stance, defining them as a single theater. His rationale: that treating the Ukraine conflict as subordinate to a potential contingency in the Taiwan Strait could open up fissures between America and its European allies. Evidently allied representatives told him so.

Whether and how Washington resolves this tension matters a great deal. To see why let’s gaze at the question through the lenses of geography, strategic theory, and history.

Start with geography. From a cartographic standpoint it seems obvious to classify Europe and East Asia as a single theater and frame strategy vis-à-vis the Russo-Chinese axis accordingly. Russia and China are geographically contiguous. Their combined landmass sweeps from European Russia eastward through the Russian Far East before curving southward into Chinese territory. Crudely speaking, they form a continental crescent. Ukraine is contiguous to European Russia, as the ongoing war has shown so graphically, while Taiwan lies off the Chinese seacoast at the midpoint of the first island chain. So Eurasia is a single theater. QED. Right?

The masterworks of strategy should give foreign-policy officialdom pause before it declares Eurasia a unified theater. Geographic contiguity is not the sole determinant of what constitutes a theater. Just because two hotspots adjoin a single landmass doesn’t necessarily make them part of a single mega-theater. Military sage Carl von Clausewitz defines a theater of operations as “a sector of the total war area which has protected boundaries and so a certain degree of independence.” He observes that “fortifications or great natural barriers” could segregate one theater from others, as could “a substantial distance between it and the rest of the war area.” While not completely self-contained, such a sector is “a subordinate entity in itself,” affected “not directly but only indirectly” by what transpires elsewhere in the conflict. For Clausewitz it’s clear that multiple theaters are in play when, for instance, a combatant makes “an advance in one theater” while simultaneously withdrawing from another, or undertakes “a defensive action in one simultaneous with an offensive in the other.”

History vindicates Clausewitz’s judgment. Multiple theaters bedevil countries of continental scale in times of war. Witness the American Civil War, where combat raged in eastern, western, and southern theaters. Or, with its sprawling territory, Russia has a history of fighting in multiple theaters around its periphery, or waging war in one theater while having to remain on guard in others lest potential foes decide to make mischief while the Russian army is otherwise occupied. The Russo-Japanese War of 1904-5, for example, took place mainly in Korea, Manchuria, and north China, adjacent to the Russian Far East. That was a remote and vastly different theater from European Russia, the seat of Russian society and economic and political power. It also commanded secondary importance for St. Petersburg.

In Clausewitzian parlance, sheer geographic distance warrants thinking of the Far East as a distinct theater in the Russo-Japanese War, as does the fact that the tsar’s army and navy essayed offensive operations against Japan—albeit with decidedly suboptimal results—while remaining on the defensive against prospective European antagonists west of the Urals. Now as then, what appears to make sense from glancing at the map ends up making little sense after factoring in strategic precepts and the historical record.

Am I making much ado about very little? No. Go back to the Good Book, Clausewitz’s On War. Toward the end the Prussian strategist explains why it’s so important to differentiate among theaters of operations. This elementary task helps political and military overseers set and enforce priorities, which is what strategy is all about at its most basic. No contender can afford all of its goals; interests and purposes are many and varied, resources finite. So setting priorities is a must. Clausewitz beseeches makers and executors of strategy to concentrate treasure, military hardware, and manpower on attaining what they value most while abjuring what matters less. In all likelihood that means other worthy but secondary commitments go wanting.

That may be tough to stomach, but it’s life in the realm of statecraft.

Clausewitz situates this point in the midst of his meditations on the “center of gravity,” that which lends an opponent’s forces, society, or government cohesion. Strike the center of gravity hard and repeatedly and the foe capitulates or can no longer balk your will. That’s why he assigns it the utmost priority and demotes everything else. Here’s what he says: “The principle of aiming everything at the enemy’s center of gravity admits of only one exception—that is, when secondary operations look exceptionally rewarding. But we must repeat that only decisive superiority can justify diverting strength without risking too much in the principal theater.” So there are elements of reward, resources, and risk in the Clausewitzian calculus. Wise statesmen and commanders forego efforts that don’t promise exceptional reward. They husband resources for the main theater or effort. And they make their north star the principle that sane decisionmakers never risk what matters most for something that matters less. Years ago I took to calling these Clausewitz’s Three Rs—reward, resources, risk.

Words to the wise from the grandmaster.

It is unwise in the extreme to classify Eurasia, with all of its geographic bulk, as a single theater of operations. If you do you’re stating that all contingencies in that theater promise exceptional reward, and thus have equal claim on warlike resources regardless of risk. If you view everything as all-important, you scatter resources all over the map—and thin out the resources available to handle any single contingency.

Try to do everything, everywhere, and you end up accomplishing little, anywhere.

This logic was second nature for U.S. decisionmakers during the Cold War, an age of tense peace among the great powers. Successive administrations designated Europe as the primary theater of U.S. interest, implying that Asia and other regions were secondary theaters, to be managed on a not-to-interfere basis with European affairs. During the Korean War the Harry Truman administration suspected that the communist bloc had staged the invasion of South Korea as a feint before major aggression in Western Europe, and made the conscious choice to conserve resources in Northeast Asia—especially scarce atomic weapons—in case the main blow did fall in the west. The Lyndon Johnson administration eventually rejected Pentagon pleas for more troops in Vietnam, concluding that a supersized commitment in Indochina would place America’s capacity to wage the larger Cold War in jeopardy.

It takes discipline to set and enforce priorities. Every commitment has advocates who regard their commitment as the most important thing to U.S. foreign policy, bar none. Kurt Campbell and the Biden administration appear to have yielded to European allies (and presumably Europeanists within the foreign-policy establishment) clamoring for Washington to designate the Ukraine war as having equal standing with Taiwan in U.S. strategy, and thus just as compelling a claim on U.S. resources. This despite successive presidential administrations’ assigning the Indo-Pacific top priority for the U.S. armed services. By implication Europe now ranks as a secondary theater, with a lesser claim on U.S. resources.

Two broad alternatives. One, Washington could embrace Clausewitzian logic afresh and work toward a division of labor with European allies whereby Europeans take primary ownership of European security and the United States takes primary ownership of Indo-Pacific security. In military lingo, America should play a supporting part in Europe, where Europeans are the supported party, and Europeans should play a supporting part in the Indo-Pacific, where the United States is the supported party. Such an arrangement might let the United States accomplish its most important goals in the world while remaining a trusty ally in Europe, and without boosting its investment in the armed forces and other diplomatically and militarily relevant resources.

Or two, American government and society could make the conscious political choice to invest in the wherewithal to exercise stewardship over multiple Eurasian theaters—much as Congress, the Franklin Roosevelt administration, and American society did in 1940, when Congress decreed the construction of what amounted to a second U.S. Navy. The fall of France electrified official Washington into passing the Two-Ocean Navy Act, which furnished naval resources sufficient to win major wars against peer opponents in both the Atlantic and Pacific oceans. That degree of commitment carried over into the Cold War, faltering only in the post-Cold War decades. In fact, the United States spent roughly double what it does now, measured by percentage of GDP, throughout forty years of antagonism with the Soviet bloc.

In other words, option two is the pricey option. Investing much more is the price of partly escaping Clausewitz’s remorseless logic of primary and secondary theaters—his Three Rs. Is the Russian invasion of Ukraine a political stimulus comparable to the Nazi conquest of France? We shall see. If 2022 is 1940 in American minds, we should expect to see the Biden administration make the case for a major boost in defense and foreign-policy resources. If not, Washington will refuse to set priorities, try to muddle through with existing resources, and run the risk of coming up short in the Taiwan Strait or elsewhere in the Indo-Pacific, the primary theater.

In a sense, perversely, Ukrainian valor has drained some of the drama from the situation, diluting the political catalyst for the United States to rearm. If the lesson drawn is that Europeans can resist great-power aggression on their own with external support, American society and government may conclude that they can get by in Europe on the cheap without neglecting Asia. That of course neglects the possibility of a wider European war that demands much more direct—and lavish—U.S. and NATO involvement.

Chances are, option one will carry the day barring some development that makes option two unavoidable. Politics will follow events. In the meantime, it’s up to U.S. leaders to rededicate themselves to the strategic habit of mind and to resist conveying the impression to the American people and allies that the United States can do it all. It can’t. That’s unwelcome news—but passing along unwelcome news and shaping popular expectations comes with strategic and political leadership.