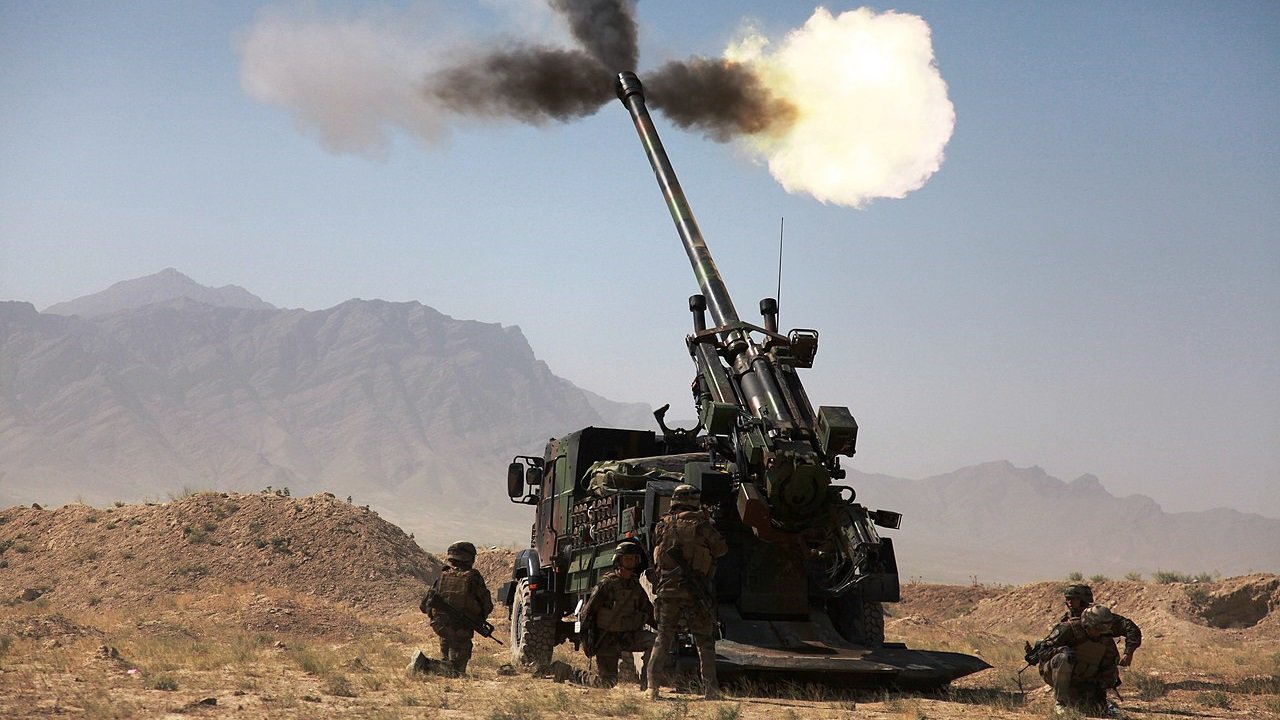 On Monday the city council of Mariupol, the Ukrainian port captured by Russian forces after a brutal three-month siege, posted a video depicting the Ukrainian Army’s 55th Artillery Brigade in action. Rather than the brigade’s usual Soviet-vintage Msta-B towed howitzers, the video showed gunners unloading shells – one of which is inscribed “For Mariujpol” – and firing them from a gun built into the back of a truck.

This announced to the world that some of the 12 French CAESAR self-propelled howitzers promised by French President Emanuel Emmanuel Macron on April 22 had reached the frontlines. Forty Ukrainian soldiers spent weeks training in Paris to operate the systems.

Ukrainian armed forces commander Valeriy Zaluzhnyi subsequently posted on Facebook, “Caesar howitzers are already at the frontline,” noting that it had the range to destroy “enemy’s artillery, reserves, and command posts.” Describing its digital targeting system and ability to perform shoot-and-scoot fires, he claimed Ukrainian gunners had “…rapidly mastered the new artillery piece, in fact in 2-3 hours.”

The 55th Artillery Brigade was also reportedly the first unit to receive some of the 90 M777 towed howitzers provided by the United States. The fewer CAESARs, however, do boast much greater range and mobility than the M777s, which already outdistance much of the Russian artillery.

CAESAR is an on-the-nose acronym in French for “truck equipped with an artillery system.” It marks a departure from the Cold War trend towards fully-enclosed, tracked self-propelled guns, like France’s AuF1 howitzer built on the hull of an AMX-30 tank, built to survive a potential nuclear World War III.

As that scenario seemed unlikely after the dissolution of the Soviet Union, the French military was intrigued in 1994 when manufacturer GIAT unveiled a truck-based mobile artillery prototype with one-quarter the operating costs and one-third the maintenance costs of an AuF1.

The 6×6 CAESAR’s UNIMOG truck chassis weighs 17.7 tons, less than half the 48 tons of the AuF1, and, importantly for the forthcoming era of global counter-insurgency operations, could fit inside medium-lift C-130, C-160, or A400M cargo planes.

Of course, by trading away armor and tracks, a CAESAR can’t handle the same terrain, and its crew is more vulnerable to shrapnel and small arms, particularly when dismounted to operate the cannon. That said, the Unimog truck reportedly can still handle 40-degree gradients, thanks to its adjustable tire pressure, and the crew cab can be reinforced with additional armor.

Ramming and gun-laying are fully automated using CAESAR’s built-in digital fire control computer, though loading shells and propellant is done manually. At its fastest, a CAESAR can surge three roughly 100-pound rounds in 18 seconds, or sustain 6-8 rounds per minute. But with only 18 rounds carried, a CAESAR must rely on a crane-equipped ammunition truck to perform more sustained fires.

But for quick shoot-and-scoot fires, a CAESAR crew can begin firing 60 seconds after arriving on position and decamp within 40 seconds. That means a CAESAR unit can begin rolling away less than three minutes after deploying, well before a counterbattery riposte can land.

Other specialized munitions useable with CAESAR include the Ogre cargo shell, which can each spray an area with 63 cluster bomblets, and the BONUS guided anti-tank round, which releases two independent munitions that scan a 180-meter radius for armored vehicles using infrared and lidar sensors. Once detected, the munitions smack the vehicle’s thin top armor with an explosively formed penetrator (EFP). Both shell types have a range of 21 miles.

Finally, between 2016-2019, four CAESARs and a rotating contingent of gunners were formed into Taskforce Wagram and dispatched to Iraq and Syria to combat ISIS after the horrible Bataclan terror attack. Wagram provided round-the-clock fire support in the battles of Mosul, Tal Afar, Raqqa, and Barghouz, often paired closely with American artillery. In one incident on December 3, 2018, three CAESARs knocked out eight ISIS armored vehicles near Deir-es Zor using just four BONUS smart rounds.

CAESAR has also seen export success. The Saudi Arabian National Guard has received some of the promised 136 gun trucks. According to French intelligence these were employed against Houthi rebels in Yemen. Thailand also acquired six CAESARs, which it allegedly used to knock out two Grad rocket-launcher trucks in a border skirmish.

The Czech Republic is receiving a customized 8×8 CAESAR using its indigenous Tatra T815 truck. Weighing nearly twice as much at 39 tons, this variant is better armored, has twice the ammunition capacity (36 rounds), and boasts a fully automated loading system and modernized fire control. Denmark too is ordering 15 8×8 CAESARs.

Future CAESAR operators include Belgium (9 CAESAR NGs, see below), Colombia (4 going on 12), and Morocco (36), with Indonesia increasing its 37 Caesars by an additional 18. The U.S. Army is also evaluating CAESAR, following a three-month ‘shootoff’ completed in November 2021 versus competing designs.

France operates 77 Caesars alongside 36 remaining tracked AuF1s and twelve TRF1 towed guns. Paris plans to procure 33 CAESAR Next Generation systems to replace the AuF1s by 2030, and either upgrade or replace existing CAESARs to the new standard. This model matches the gun to a new Arquus 6×6 truck with enhanced crew protection against IEDs and small arms, an 80 percent more powerful 460 horsepower engine, and modernized fire control and communication systems designed to integrate with the Scorpion battle-management network and future smart ammunition.

President Macron has received flak from supporters of Ukraine for his repeated calls to Putin made in hopes of encouraging a ceasefire agreement. The French president sees himself playing the role of ‘good cop,’ maintaining communication with Moscow, arguing France is a preferred broker for eventual peace negotiations over Turkey, India, or China.

However, Macron is tougher on Putin than his strongest domestic rivals, particularly Marine Le Pen (defeated in an April election), whose party is repaying a $13 million loan to a Russian military contractor. She represents the Paris-Moscow strain of French foreign policy which sees alignment and dealings with Russia – such as the canceled sale of Mistral amphibious carriers – as means for France to become more independent of the EU and U.S.

The perception of Macron’s softness versus Russia is inadvertently reinforced by a policy of keeping most military assistance to Ukraine secret. Though this had a rationale in operational security and anti-escalatory diplomacy, this has obscured how much aid France is giving.

Initial French contributions announced on February 26 were valued at around €120 million, but since then Macron announced augmentations to assistance on April 13th and 30th. In terms of specifics, we only know France has given Javelin and domestic MILAN anti-tank missiles, as well as Mistral portable surface-to-air missiles. France has also reportedly furnished infrared sensors, fuel, body armor, and access to French reconnaissance satellites.

CAESAR is thus the most publicly prominent manifestation of French assistance to Ukraine. Together with other long-range systems delivered by NATO such as Slovakian Zuzanas, German and Dutch PzH-2000s as well as Ukraine’s few valuable 2S7 guns, the CAESAR will constitute a long-arm of Ukrainian artillery, which out-distances most Russian guns.

Artillery duels currently dominate fighting raging in the Donbas region of Ukraine, a theater evolving adversely for Ukraine in late May as Russian forces attempt to encircle the fortified city of Severodonetsk with offensives aimed at Lyman, Soledar, and Bakhmut.