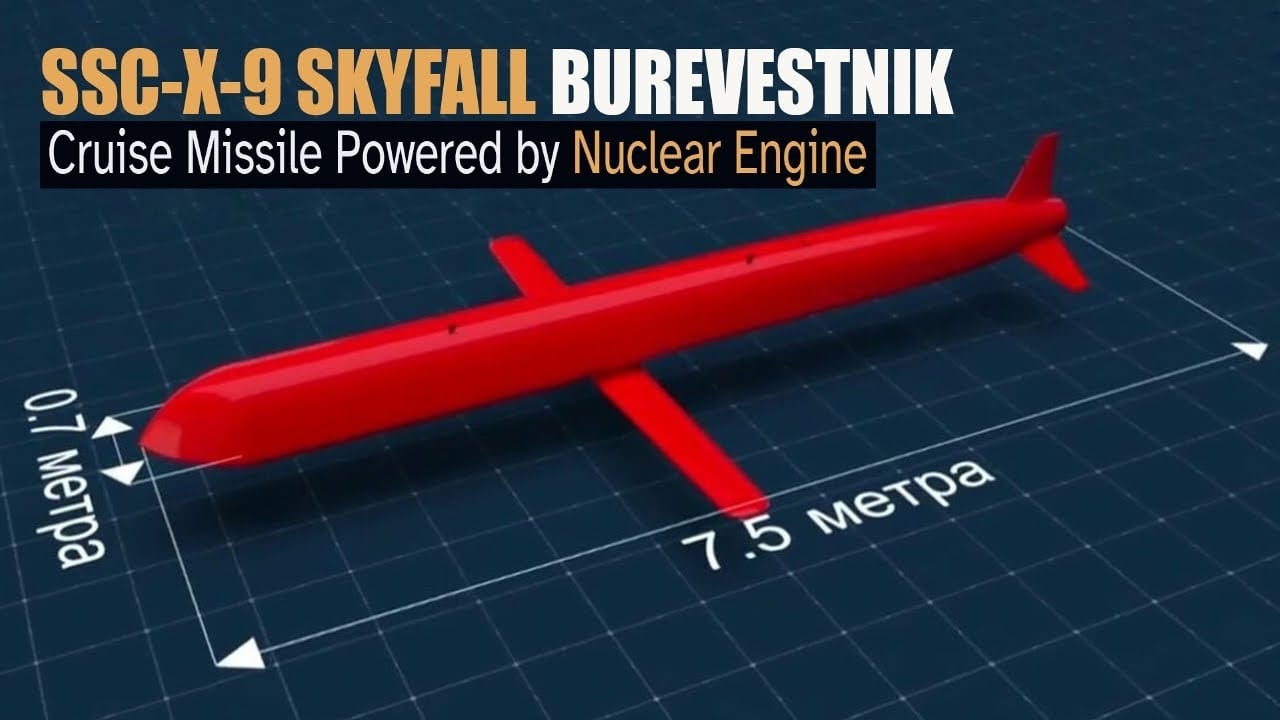 Russia is working on a nuclear-powered cruise missile that could launch from anywhere in Russia and easily hit any target in the United States. A double duo capability with nuclear propulsion and nuclear-equipped with nearly unlimited range. The Burevestnik (NATO named Skyfall) could also fly as low as 150 to 300-feet, enabling it to evade air defenses.

Dubbed the “Flying Chernobyl,” by some in the United States, Russia doesn’t have such an enviable track record on the safety side of the nuclear-powered equation. But Moscow is undeterred. Russia tested the cruise missile more than once at an Arctic facility near Pankovo on Novaya Zemlya in the Barents Sea.

Jeffrey Lewis of the Middlebury Institute of International Studies Center for Nonproliferation Studies took a look at satellite images obtained from CNN last year. These featured a launchpad for the Burevestnik, shelters from fallout, and shipping containers.

“Using a nuclear reactor would, in principle, give the cruise missile unlimited range to fly under and around US missile defense radars and interceptors,” Lewis said.

There are “substantial questions, however, about whether the system can be made to work successfully, to say nothing of the threat that testing this system may pose to the environment and human health,” he added.

Skyfall Has Enviable Characteristics on Paper

Nuclear-tipped cruise missiles usually fly at medium altitude to conserve fuel, resulting in a finite range. This height allows sensors to track them and surface-to-air interceptors to potentially destroy them. Alternatively, nuclear propulsion could give the Burevestnik capabilities not seen in other cruise missiles – hypersonic speed, evasive low altitude, and range that could threaten military and civilian targets from ultra-far distances.

The Burevestnik has endured some testing failures and the nuclear power plant is considered potentially fallible when you take Russia’s track record on missile testing into consideration. In 2019, a failed test in Nenoksa on the White Sea resulted in a Burevestnik cruise missile being submerged for a year. Five workers died and three were injured on a barge when the missile exploded during recovery operations.

Putin Brushes It Off

Russian President Vladimir Putin said at the memorial service for the dead workers that the “weapon is to be perfected regardless of anything.”

The Burevestnik has environmental risk, according to Thomas Nilsen of the Barents Observer. “Radiation challenges, however, are obvious: For size and weight reasons, such a small airborne reactor has limited possibilities to hold a closed cooling circuit, likely causing radioactive isotopes to be released into the atmosphere.”

The low-flying Skyfall missile would produce exhaust that could contain radiation and could float down to endanger people and wildlife. Other aircraft could fly close to where the missile flew and pick up radiation fallout.

Putin’s Cold War mindset has doomsday weapons development as a normal part of Russia’s defense strategy. The risk of harming the environment is not much of a factor in his calculations. He’ll continue to ignore future nuclear accidents. If a nuclear-powered missile could explode once, it could explode again, and it is necessary to inform the international community that Russia is testing these types of dangerous weapons.