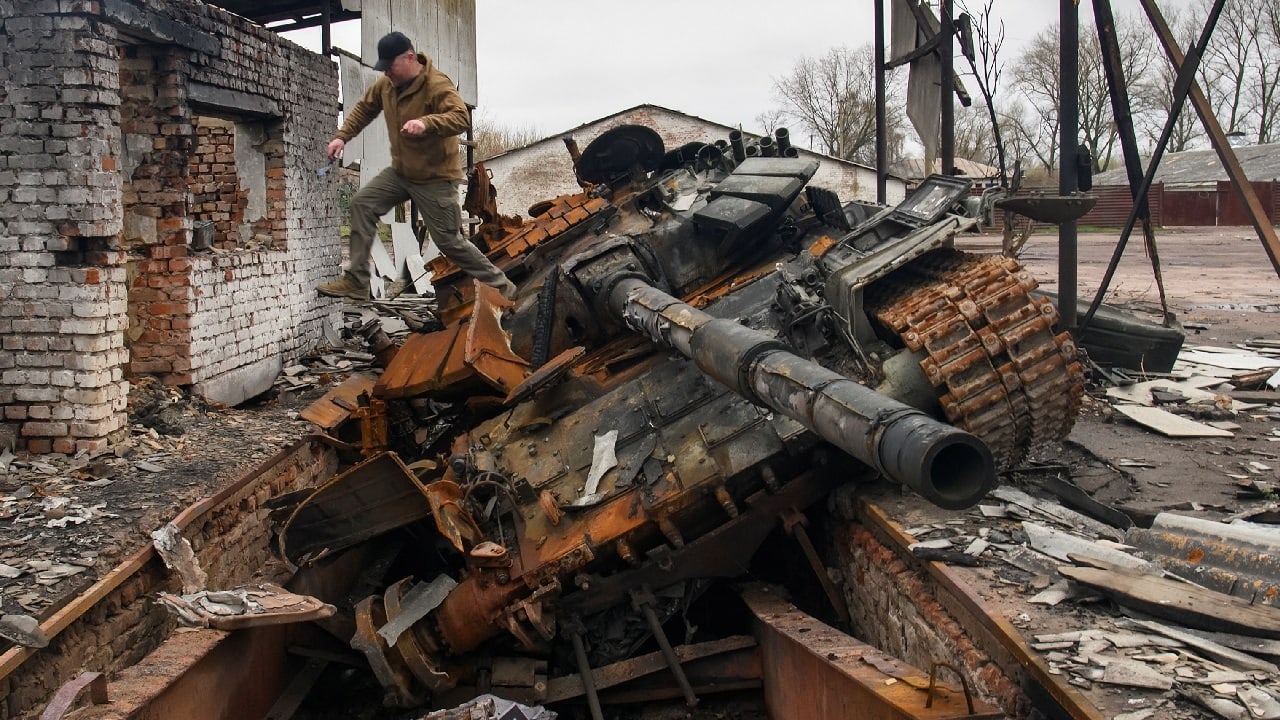 A man jumps from a Russian T-72 tank destroyed during Russia's invasion, in the village of Yahidne, Ukraine April 20, 2022. REUTERS/Vladyslav Musiienko

As millions of Ukrainians begin to return to central Ukraine following the redeployment of Russian troops to the eastern Donbas region, Ukraine’s capital city of Kyiv is now displaying destroyed Russian tanks in the streets.

The images and videos of Kyiv’s streets lined with burned-out tanks, destroyed by Ukrainian anti-tank missiles, are a stark contrast to the scenes of Russian armored vehicles and tanks surrounding the city only a matter of months ago.

Tanks traveled through the suburb of Obolonskyi, only five miles away from central Kyiv, and repositioned several times over a matter of weeks as Russian soldiers attempted to take control of the city. With greater knowledge of the city streets and ample weapons and ammunition from NATO countries, however, Ukrainian soldiers successfully pushed Russian soldiers out of the city and even out of central Ukraine.

Photographs of Ukrainian citizens walking through the streets of Kyiv and posing with the destroyed tanks went viral on social media this week. The images were shared by Yaroslav Trofimov, the chief foreign affairs correspondent for The Wall Street Journal, on Twitter.

“On day 88 of the war, Russian tanks have finally entered Kyiv,” he said – a not to Russia’s failed efforts to take control of central Kyiv.

The photographs showed young children walking around and assessing the tanks, with adults posing for pictures in front of the destroyed vehicles and some even standing on top of them.

Defense experts believe that Russian tanks in use in Ukraine are in a “poor state” and may not even be usable. Russian troops are also reportedly resorting to modifying tanks on the field using whatever materials they can find, as Moscow struggles to resupply troops in the eastern Donbas region with new smart missiles, missile launchers, armored vehicles, and tanks.

Reports reveal how Russian troops are creating makeshift cages and strapping them to tanks in an effort to stop the vehicles from being destroyed by rocket-propelled grenades. The cages were used by British forces in Iraq and are designed to crumple the head of a rocket-propelled grenade upon impact – but makeshift cages are likely less effective than those used by the British

Russia is believed to have lost as many as 2,800 tanks in Ukraine so far, though the lowest estimates suggest that the number is closer to 695. Technically, Moscow has sufficient tanks to continue its military offensive in Ukraine, with 10,000 tanks in storage – but many of those tanks have been in storage for several decades and may not be ready for use.

Frank Ledwidge, a former military officer, told The Independent that it’s safe to assume that most of Russia’s backup tanks are not well maintained.

“Given that the tanks they have in operations have not demonstrated a high level of serviceability and engineering and maintenance, it is reasonable to assume in a corrupt and cored-out military and ramshackle military infrastructure that the tanks that are in storage are not well kept,” he said.

“It is highly likely that very few of them are within six months of deployable condition.

Running out of tanks, ammunition, and soldiers, Russia’s offensive in eastern Ukraine is struggling so badly that Kyiv is confident in taunting Russia by displaying destroyed vehicles in its capital – but Russia has not signaled any intention to stop the invasion any time soon.