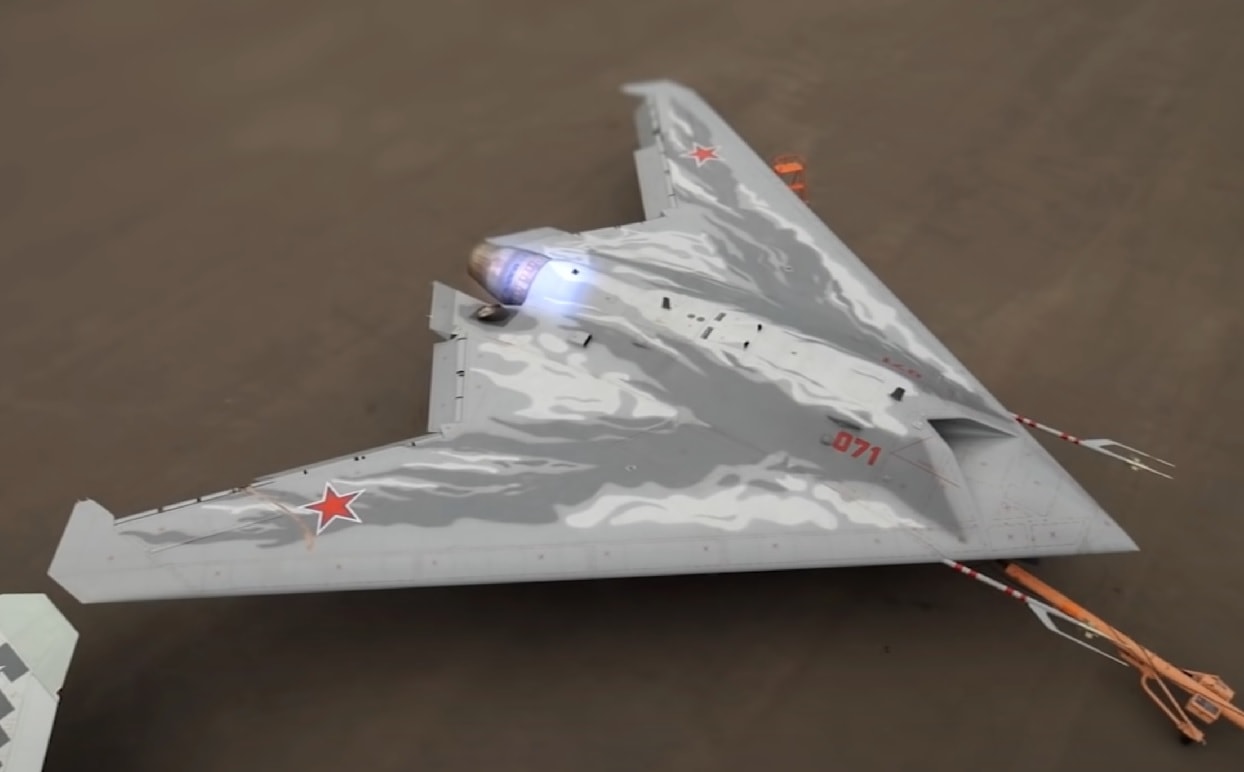 Earlier this year, it was reported that Russia had completed tests of its Sukhoi S-70 Okhotnik-B heavy attack drone in an air-to-air combat simulation at the Ashuluk training grounds. That exercise was aimed to assess the drone’s compatibility with the Su-57 stealth fighter in an unmanned wingman role. The Board of the Russian Military-Industrial Commission had previously announced that deliveries of the Okhotnik (Russian for “Hunter”) – its stealth heavy unmanned combat aerial vehicle (UCAV) – were on track to enter service in 2024.

It was also just last month that Russian state media reported that serial production of the drones would begin in 2023.

“The first flying prototype was rolled out in 2021 and we will begin serial-producing and delivering it to the Defense Ministry in 2023,” Sergey Chemezov, head of the state tech corporation Rostec, said during a meeting with Russian President Vladimir Putin, according to Tass.

The combat drone is being developed by Sukhoi and the Russian Aircraft Corporation MiG as a sixth-generation aircraft project, and it is based on the earlier Mikoyan Skat, which was also designed by MiG. It is considered to be in the same class of drones as the Dassault nEUROn or Boeing Loyal Wingman, which could each act as force multipliers and augment the capabilities of manned aircraft – notably fifth- and sixth-generation stealth multirole fighters.

The drones could substantially extend the sensor and weapon ranges of manned fighters, allowing the latter greater area coverage and kills per mission. Up to four S-70s could work in tandem with a single jet fighter, while a two-seat Su-57 variant was also reportedly designed to control a swarm of the heavy Okhotnik combat drones.

The S-70 Okhotnik drone features stealth technology and a flying wing tailless design, which diminishes its radar signature. According to the data from Russia’s Defense Ministry, the drone has an anti-radar coating and is outfitted with equipment for electro-optical, radar, and other types of reconnaissance.

This flying hunter has a take-off weight of 20 tonnes and can accelerate to roughly 1,000 km/h. It is also believed to be powered by either a single AL-31F turbofan – the same used on the Sukhoi Su-27 fighter, or by the improved AL-41F derivative that is installed on the Su-35S fighters and Su-57 prototype aircraft. It has a range of 6,000 km and a combat range of 4,000 km. It features two internal weapons bays that can carry up to 2,000 kg of guided and unguided munitions.

The Okhotnik heavy attack drone performed its debut flight on August 3, 2019 – which lasted slightly more than 20 minutes under an operator’s control. On September 27, 2019, the Okhotnik was used in a test flight together with a Su-57 fifth-generation fighter jet. The drone had successfully maneuvered in the air in automated mode at an altitude of around 1,600 meters and its flight lasted more than 30 minutes.