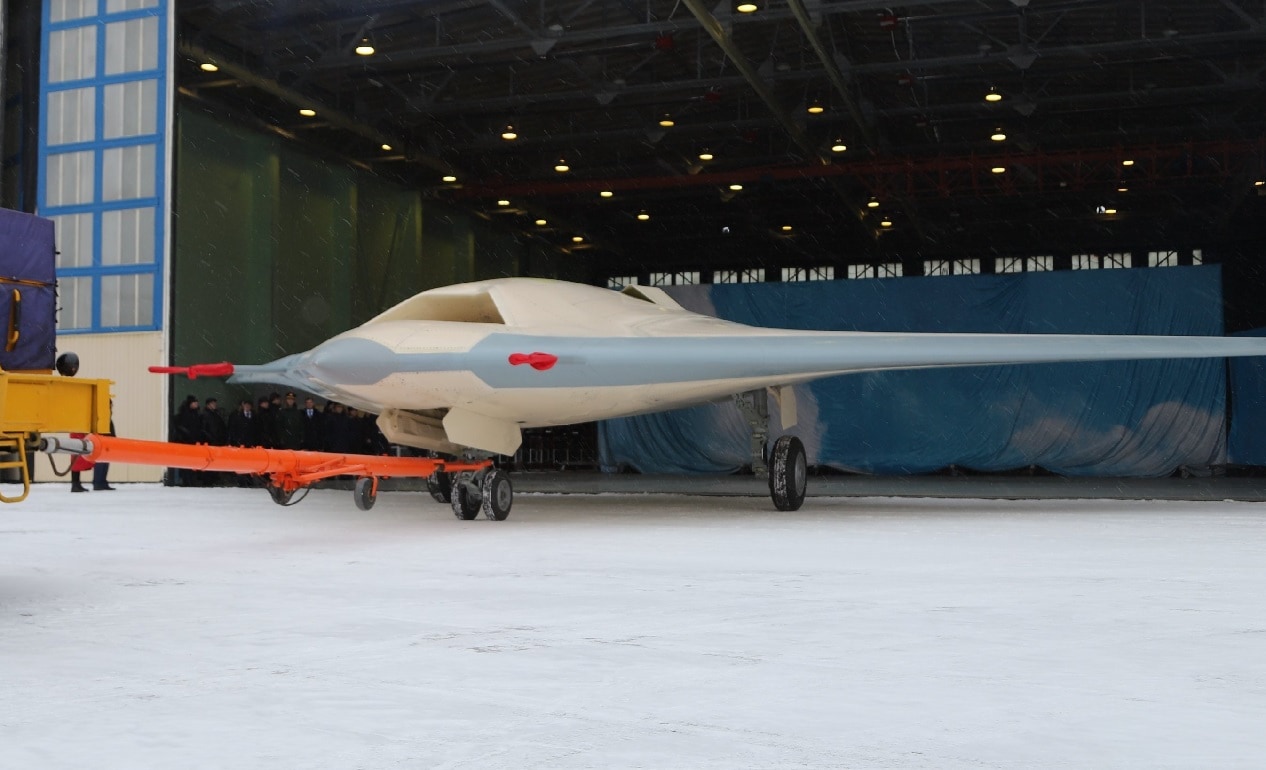 Sukhoi S-70 Okhotnik-B drones are slated to be launched from a new Russian amphibious assault ship, a sort of mini aircraft carrier if you will. The Mitrofan Moskalenko will be a 44,000-ton helicopter carrier that can carry four S-70 “Hunter” stealth drones. The drones will execute deep strike missions and also provide targeting data for Tsirkon hypersonic missiles fired from other vessels in the fleet. But it will be the Okhotnik S-70 that provides the eyes, ears, and long-range stealth attack mission for the ship.

The Okhotnik S-70 is a robust drone that should go into serial production in 2023 and enter wider service in 2024. The first flying prototype was unveiled in 2019. It is large for an unmanned system, weighing in at 20 tons with a wingspan of 46 feet. The S-70 will have a powerful AL-41F turbofan engine – the same power plant that the 5th generation Su-57 stealth fighter boasts. This gives it a combat range of 2,500 miles and a top speed of 621 miles per hour.

S-70 Flying With the Su-57 for Full Combat Effect

The Okhotnik is slated to fly with the Su-57 in a “loyal wingman” role in which it forges ahead, penetrates enemy defenses, spots intercepting fighter jets, and either launches air-to-surface missiles or sends targeting data back to the Su-57. This results in greater situational awareness and more munitions that can be dropped or launched. Four Okhotniks could fly with the Su-57. The drone and a Su-57 successfully tested this concept earlier this year in an exercise over the Ashuluk training grounds.

Has Similarities to Other Stealth Drones

The Okhotnik is similar to the Boeing MQ-28 Ghost Bat loyal wingman drone that is being readied for Australia. The S-70 is a tail-less flying wing design like the Northrop Grumman’s X-47B drone. Its coating gives it radar-evading characteristics, plus its flat nozzle and engine fit into the fuselage to improve stealthiness. No antennas and inlets are visible. Two internal weapons bays carry a payload of 4,400 pounds.

Air-to-Ground Missiles Appear to Have Worked

In May, the drone hit ground targets in a precision-strike test, according to Janes Defense. The munition was likely a Kh-59MK2 standoff cruise missile, which the Su-57 can also fire. This cruise missile is 14 feet long and satellite-guided with a range of 310 miles.

How Stealthy Is It?

The Su-57 is not the best stealth fighter in the world and there are questions about the extent to which it can evade radar. The level of stealthiness on the S-70 Okhotnik is likely lower than the MQ-28 Ghost Bat combat UAV or the X-47B.

Will The Okhotnik and Su-57 Fly Together on a Regular Basis?

Since the Russians do not have a functioning aircraft carrier in active service, the future amphibious assault ship will be an additional way to deliver the combat drone to battle. This configuration could be better for the Russian Navy than the Air Force. It’s not clear how the Okhotnik would be able to fly in loyal wingman mode with the Su-57 if one aircraft launches from a ship and the other takes off from the ground. Both aircraft would have to take off from closer locations to fly in formation. But the Okhotnik has long-range capabilities, so the loyal wingman concept is still viable if the warplanes can rendezvous in the air.

One has to admit that the Okhotnik is proceeding with various testing missions in a fashion that will have it flying one day for the Russian Air Force and Navy. It can carry a heavy load of weapons and it has an impressive range. The development of this aircraft is something to keep an eye on, especially if it flies in a formation with the Su-57 on a regular basis and creates a bonafide hunter-killer team to find, fix, and destroy adversaries.