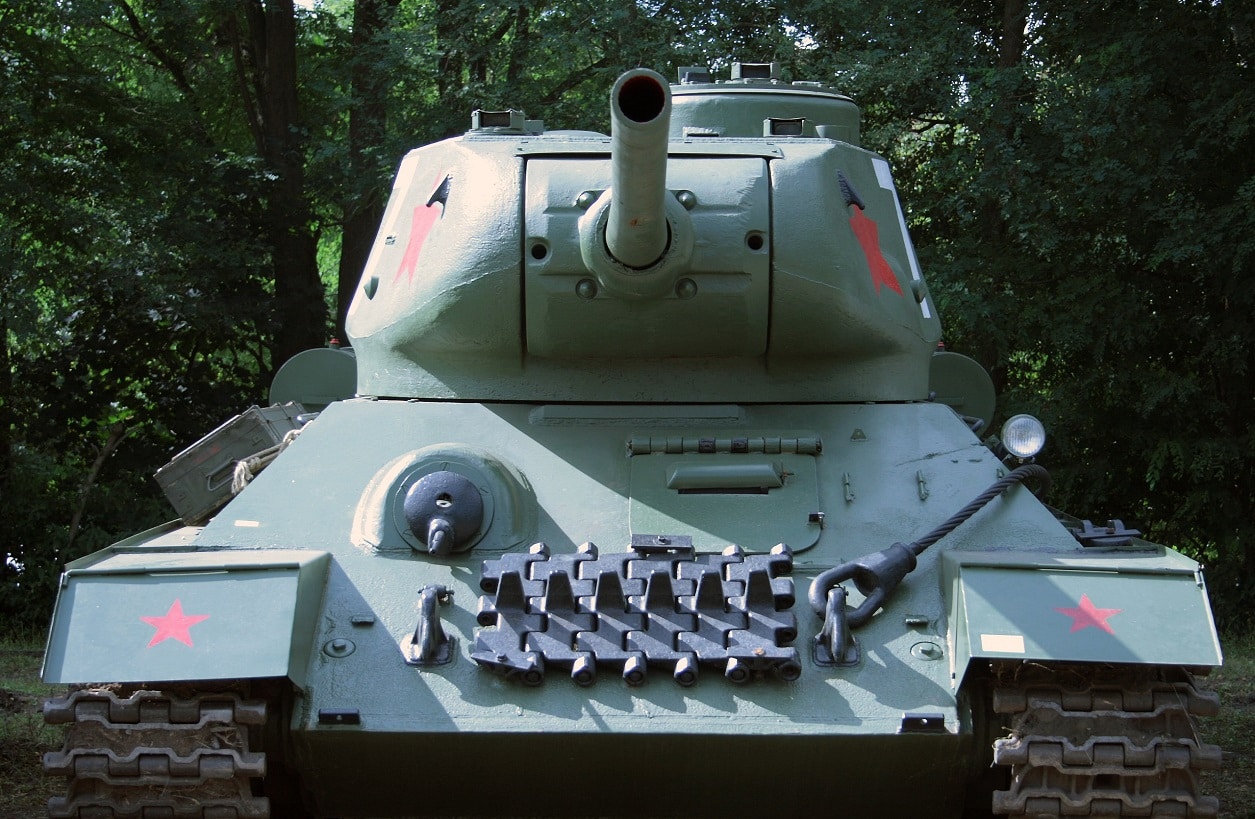 Russia’s T-34 Tank, a History: In response to my recent 1945 articles on the ubiquitous Soviet-designed MiG-21 “Fishbed” and MiG-23 “Flogger” jet fighters, a couple of my Facebook friends quoted the saying, “Quantity has a quality all its own” – a statement supposedly made by Joseph Stalin.

Regardless of whether or not Uncle Joe said this, the quote can easily be applied to a Soviet-designed ground-pounding weapon – the legendary T-34 medium tank. This battle tank earned its treads in the brutal battles that pitted Stalin’s Red Army against Nazi Germany’s Wehrmacht and Waffen-SS during the Second World War, or as the Russians still call it, the Great Patriotic War (Velikaya Otechestvennaya voyna).

As students of World War II are well aware, Operation Barbarossa, Adolf Hitler’s grandiose invasion of the USSR, went poorly for the Soviets at first. Stalin, his generals, and the rank & file of the Red Army and Soviet Air Force were all caught with their pants down.

(As a gee-whiz trivia aside for anybody wondering about the operational moniker, its namesake was Frederick I, Holy Roman Emperor from 1155 until his death in 1190, who was also known as Frederick Barbarossa on account of his red beard.)

Eventually, of course, the Soviets turned the tide of battle and put a serious damper on Hitler’s drive to dominate Europe. One of the key weapons systems in the Reds’ comeback victory — along with the Mosin-Nagant rifle in the hands of the immortalized sniper Vasily Zaitsev at Stalingrad — was the T-34. This decidedly utilitarian medium tank earned the praise of no less than the famed German panzer general Heinz Guderian, who affirmed the T-34’s “vast superiority” over the German tanks used in the operation. Meanwhile, Guderian’s colleague, Generalfeldmarschall Paul Ludwig Ewald von Kleist, straight-up called it “the finest tank in the world.”

The Imperialist Roots of a Proletarian Tank

It is well known that the Soviet Union received plenty of weaponry from the United States during the war via the Lend-Lease Act, including M4 Sherman tanks. What is not as well known is that the T-34, the pride and joy of proletarian tank design, actually had its origins with the Soviets’ erstwhile capitalist ally. Specifically, the Russian tank inherited the Christie suspension system developed by American engineer J. Walter Christie for the American M1928 tank. Christie’s patent allowed considerably longer movement than the conventional leaf-spring systems in common use at the time. This gave his tanks considerably greater cross-country speed.

The M1928 was rejected by the U.S Army, but multiple units were sold without turrets to the Red Army. They were officially documented as “farm tractors.”

Another feature that carried over from Christie’s M1928 to the T-34 was the sloped armor, which gave the tank superb survivability and near-impregnability against the artillery pieces and tank guns used by the Germans in the initial stages of the war. The Soviet tank’s armor was actually only 45 to 60 mm thick, but the heavy slope of up to 60 degrees dramatically increased its effectiveness. This design feature is one of the key reasons that amateur historian Simon Whistler rates the T-34 as one of the five best tanks of WWII: “Sloped armor is one of those innovations that it seems very obvious in hindsight, but it doesn’t look that revolutionary,” Whistler says. “But make no mistake, this small difference in design was so crucial to the success of the T-34 that other countries including Germany began incorporating it into their own tank designs.”

Just how effective was this sloped armor? To cite just one anecdotal example, a single Soviet T-34 was hit more than 30 times by a battalion-sized contingent of German 37mm and 50mm anti-tank guns. It survived intact and drove back to its own lines a few hours later. Meanwhile, the Stalinist tank’s 41-caliber, 76-mm gun had no problem punching through the armor of the enemy’s Panzer III and IV medium tanks and troop entrenchments. The T-34 also boasted good speed, with a max of 33 miles per hour.

The Great Toll of the Greatest Tank Battle

As might be expected from any machine mass-produced in a Communist country, the T-34 had its flaws. As noted by my 1945 colleague Sebastien Roblen,”The T-34…had notoriously uncomfortable ergonomics and a cramped turret.” Then there was the issue of task saturation for the tank commander, “who doubled as a loader, a gunner, a driver and a machine-gunner/radio operator. This meant the tank commander had to do double-duty—or triple duty if he was also a unit commander.”

There were communications issues due to a paucity of radios, which were typically doled out only to commissioned officers. There were also issues of mechanical reliability, though certainly not as bad as those plaguing the much-feared German Tiger tank.

Moreover, German anti-tank guns and technology soon caught up with, and exceeded, the capabilities of the T-34. The Panther and the aforementioned Tiger tanks boasted frontal armor that easily stood up to the Soviet tank’s main gun, while in turn the main guns of these killer cats could slice through Russkie armor like the proverbial knife through butter.

This was starkly demonstrated by the T-34’s loss rate: In 1941 alone, the Soviets lost an average of more than seven tanks for every German tank lost. Fast-forward to the Battle of Kursk in 1943, which was the largest tank battle in history. The Soviets’ loss-to-kill ratio was not as pronounced in this battle, but it was staggering all the same: 860,000 casualties and 1,500 tanks for the USSR, vs. 200,000 casualties and 500 tanks for Germany.

Yet in spite of that mind-boggling differential, the battle went down in history as a decisive defeat for Hitler. It marked the end of German offensive capability on the Eastern Front and cleared the way for the great Soviet offensives of 1944–1945.

Why? Sheer weight of numbers, which brings us back to the “quantity/quality” quote. It also brings to mind Simon Whistler’s other chief reason for ranking the T-34 in his Top 5: mass production. More than 84,000 T-34s were produced, and in spite of the best efforts of Albert Speer’s Reich Ministry of Armaments and War Production, Germany’s industrial capacity could not keep up. Stalin could afford his losses; Hitler and Speer could not.