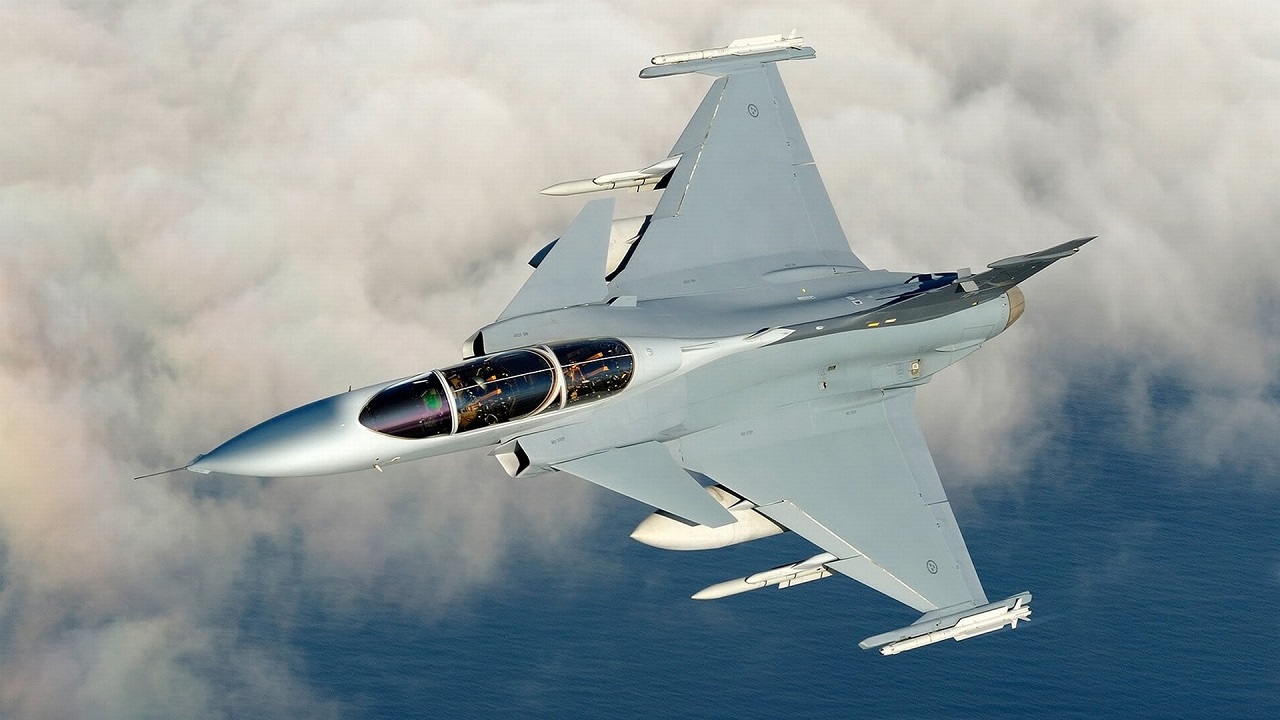 There is much activity around the development and interest in Swedish Air Force fighter planes, among them the Saab 37 Viggen. Sweden, along with Scandinavian brother nation Finland, has made the momentous decision to join NATO. This, in turn, has unsurprisingly generated a new round interest in Swedish weapons systems and military capabilities, particularly the Viggen’s replacement, the JAS 39 Gripen.

The JAS — standing for Jakt (air-to-air), Attack (air-to-surface), and Spaning (reconnaissance)  — 39 Gripen (“griffin”), made her maiden flight on December 9, 1988, and officially entered into Swedish Air Force operational service on June 9, 1996; by 2005 she had completely replaced the Viggen. To date 271 have been built. The newer plane is also manufactured by the Saab Group (Svenska Aeroplan AktieBolag i.e. “Swedish Aeroplane Company Limited,” not to be confused with the now-defunct car company).

As the manufacturer’s official info page on the fighter series proclaims: “Gripen-C is a true swing-role fighter, designed with smart technical solutions. It is built to adapt to new technologies as they become available and to counter evolving threats as they arise. Gripped is ready to dominate the battlespace for decades to come…Gripen C-series is the most reliable swing role combat aircraft. Over 150 million people in five countries on three continents rely on Gripen C-series to protect their sovereign air space and ensuring their independence.”

Besides the glaringly obvious example of Sweden, five countries with the 39 Gripen include Brazil, South Africa, Hungary, and the Czech Republic aka Czechcia. Regarding the Czechs in particular, as convenient timing would have it, the Reuters news agency reported the following this week:

“Slovakia has sought help from its NATO allies as it looks to ground its Russian-made MiG-29 fighter jets in August under long-standing plans to modernise the military. Slovak government officials have said the old jets could be sent to neighbouring Ukraine to help Kyiv defend itself against Russia’s invasion. From September, the Czech army’s [sic] Gripen JAS-39 fighter jets will provide air policing for Slovakia until at least the end of 2023, the Czech Defence Ministry said. Poland is also expected to take part, it said.”

Speaking of Ukraine, Sweden could conceivably be donating some JAS 39 warbirds to that war-ravaged nation down the road, but that wouldn’t be until 2027 at the earliest.

Another potential foreign customer is the Philippines. The Philippine Air Force (PAF) has narrowed down its final two candidates for its multi-role fighter (MRF) program to the JAS 39 and the F-16V Viper/Fighting Falcon. On the one hand, one distinct advantage the Gripen C would have would be that it uses the same General Electric F-404 engine as the combat-proven FA-50PH “Golden Eagle”, of which the PAF owns a dozen of – and intends to buy more. But on the other hand, since the Philippines has a far more established long-term partnership with the United States than with Sweden, I would venture the Viper as the more likely bet to win the MRF contract.

If, in a worst-case scenario, NATO does end up in a shooting war with Vladimir Putin, that naturally begs the question as to how the Gripen would fare against Russian jet fighters. In a strictly theoretical exercise, we can at least venture somewhat of an educated guess. Against a 5th-Generation stealth fighter like the Sukhoi Su-57, the JAS 39 would likely face an uphill battle, but what about 4th-Generation counterparts like the MiG-29 “Fulcrum” and the Su-35 “Flanker-E”?

As far as the Gripen’s head-to-head against the Flanker-E, the Aviatia provides a handy-dandy scorecard, though admittedly one could say its rating systems are a tad subjective. It grants the Saab a “very good” Overall Rating vs. an “excellent” for the Sukhoi; breaking that down further, the website grades the Swedish fighter’s Dogfight Rating at 74 percent vs. the Russian warbird’s 95 percent; armament has a smaller differential, at 8.0/10 for the Swede and 8.4/10 for the Russkie.

Of course, if the proverbial merde does indeed hit the ventilateur, those arbitrary statistics aside, a scuffle between the Gripen drivers and the Russian adversaries would boil down to pilot skill and training. If I’m not mistaken, Swedish pilots are allowed more or less the same degree of individual pilot initiative as their American and British comrades, as opposed to the ground control intercept (GCI) dependency that Russian pilots are still expected to observe 30 years after the collapse of the USSR. That would presumably give the Swedish Air force warriors a bit of an edge.